How To Drive Powerful CAPAs With Lean Six Sigma 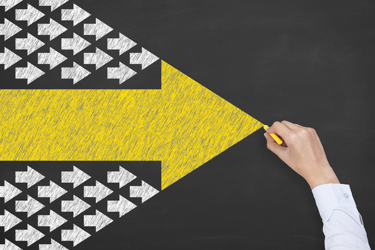 Corrective and preventive actions (CAPAs) are an important and integral part of any quality system for a life sciences company. One would expect CAPAs to be done well. And yet, strangely, CAPAs rank among the top reasons why companies get 483s and warning letters from the FDA. Reasons vary from lack of procedures for CAPAs to inadequate causal analysis, lack of data integrity, and ineffective controls to prevent nonconformances.

This article outlines how Lean Six Sigma can be applied in the CAPA process throughout the life sciences industry, using a real-world example from the author’s work at a medical device manufacturer. The problem described here plagued the company for over five years, with an annual scrap rate exceeding $250K. All prior attempts to resolve the issue had failed.

Before we get into the case study, however, it is important to describe the various components of this approach — namely Lean, Six Sigma, and CAPA — and how they fit together.

What Is Lean Six Sigma?

Lean Six Sigma (LSS) is a combination of two well-known approaches (Lean and Six Sigma) to improve organizational performance. This is accomplished via conducting projects or kaizens (change for the better, one time or continuously). Thus, there is significant overlap between the intent of a CAPA and LSS. The latter can act as a turbocharger for the former.

The typical stages in CAPA include (some may proceed in parallel):

In the following sections, we will review each of the four phases and explain how Lean Six Sigma tools were applied in the case example.

Aimed at “controlling the damage and the spread of the nonconformance,” efforts are made to remedy the error and control its effect. There is no time or effort spent on determining the causes. Metaphorically, you are stopping the bleeding and controlling the infection. The best way to do this is to apply a transparent “wound dressing” quickly.

Lean Six Sigma + CAPA In Practice: After removing parts from a curing oven, a medical implant manufacturer noticed that some parts/lots exhibited a mild straw color, rather than the typical white. The problem occurred sporadically, making it trickier to spot and address.

For C&C, the manufacturer decided to quarantine the suspect parts, visually inspect them, and sort the good from the bad, scrapping the ones found to be defective.

Applying LSS tools to the process involved checking inspector bias via a G R&R study to control/minimize the risk of defects not being detected and using Visual Management techniques such as marking rejects with red ink to prevent any chance of mix-ups.

This involves brainstorming the causes and identifying the one(s) that create the nonconformity. It is important to minimize the risk of incorrect attribution here since such errors can result in an enormous waste of time, effort, and money, besides leaving the true cause(s) intact. Therefore, confirming that the correct cause(s) has been located is key.

Once known, the cause needs to be addressed.

Lean Six Sigma + CAPA In Practice: Since the problem was sporadic in nature, a baseline FPY was calculated from historical data; it was ~70 percent. A log of the mechanical properties of test coupons from each lot, equipment setting variables vs. actual values, and process operating conditions was started to determine under what conditions the discoloration was observed. An analysis of the test coupon data indicated a strong correlation between the mechanical properties of coupons and the discoloration of parts.

Over time, two suspects emerged — thermal mass in the oven and the temperature at which the oven door was opened to remove parts. These were subsequently confirmed with controlled studies. Subsequent analysis was conducted to determine the process window that would boost the yields to 100 percent.

Applying LSS tools, Fishbone diagrams were used to identify potential variables, Process Mapping helped with the sequence of process steps, check sheets were used to enumerate occurrences of variables, and finally, Correlation/Regression Modeling was used to confirm suspected variables and establish the operational settings for each critical variable. FPY was calculated over the following two quarters and found to be 100 percent.

Once corrective actions are in place and the known causes (and the nonconformance) are addressed, it is time to look at what else can go wrong to preempt other causes and nonconformances as much as possible. But for many firms, this is an uphill task. Why?

According to the well-known maxim, “If it ain’t broke, don’t fix it.” Statements like these have sticking power, and we know they are not universally true. Not acting on a proactive basis creates enormous risks, and preventable failures become reality. What if something breaks and becomes unfixable? For example, would you wait for your pacemaker’s battery to die before replacing it?

In this phase, one starts by examining the product or service and asks what else can go wrong (or what if something goes wrong) that will result in the same nonconformance, or a similar one, to occur.

One of the best tools for seeing what lies underwater — below the tip of the iceberg — is FMEA. It helps identify potential failures and their impacts. Using three dimensions — severity of effect, probability of occurrence, and likelihood of detection/control — it creates a composite number (known as a Risk Priority Number, or RPN) to integrate and quantify the risk level.

Coupled with causal analysis and process mapping, we can identify vulnerable spots in the causal chain and apply controls where needed. Then we can institute measures to ensure the controls continue to stay in place and be functional, as identified earlier for corrective actions. Proactive measures thus keep us ahead of potential problems and failures.

Lean Six Sigma + CAPA In Practice: Could there be other factors that might result in the same nonconformance? What if other parts could be affected as well? That focus led the team to investigate further. An additional four factors surfaced that had the potential to create the same or similar nonconformances. These were: air leaks in the oven, runaway temperature conditions, prior conditioning of parts, and inadvertent contamination on part surfaces from previous processes. These were addressed before they could manifest in actual scrap and/or defects escaping detection.

The LSS tools applied included the Fishbone diagrams that were used earlier; What-If analysis that enabled the team to think out of the box to identify potential factors; probability analysis on historical occurrences of causes; and Process Maps that were helpful in identifying conditions that could converge to create rejects. Poka-Yoke was implemented to prevent temperature conditions that were over specification and air leaks (via shutting down the oven), together with SPC charting to provide early detection alarms. Further, process changes were made to prevent upstream process errors, and staff were trained to spot check (Visual Management) lots for defects. Finally, a control plan was set up to ensure the changes implemented would not be undone over time.

How is one to know if the remedies that were applied to known and potential causes continue to work? That is the value of VoE. While most will pay lip service to this phase, it is in fact the last gate and opportunity in the CAPA process to ensure the nonconformance will not be experienced again and to prevent other similar ones from happening.

It is common to identify a duration for the VoE; this is understandable. The bigger question is, how long should it last? Another important question is when should VoE be applied? After CA, PA, or both?

Most firms will apply VoE post PA. While there is nothing wrong with that, it is better to apply VoE after each phase — C&C, CA, and PA. This increases the robustness of all measures put in place and ensures a higher level of confidence that the nonconformances have been addressed adequately.

Lean Six Sigma + CAPA In Practice: It was agreed, based on the available data, that a six-month monitoring cycle would be adequate. As such, a random number-based timetable was instituted to do a total of 12 checks during this period (thereby eliminating periodicity-related effects).

SPC charts helped determine if the variables remained under control, checks on poka-yoke devices ensured these were functional, and T-tests conducted on mechanical properties of coupons established statistical evidence that the change had been effective and continued to work as intended.

Total project cost through the VoE was ~$65,000, including salaries and miscellaneous purchases needed for the project.

This case study shows how LSS can turbocharge the CAPA process, driving it to deliver savings of over $250,000 per year for an investment of just under $65,000. A decade later, the reject rate was still holding at zero. Based on this success, the company applied the same principles for this project across all its other sites, and across numerous product lines.

The CAPA standard operating procedures (SOPs) were also updated to incorporate the application of LSS tools and techniques. This acted as a vaccine that built strong immunity across the entire company.

Rai Chowdhary is the CEO of KPI System (Key Performance Improvement), a consultancy serving the life sciences, food, aerospace, automotive, and energy industries. He earned a master’s degree in materials science and engineering, and his certifications include QMS and Medical Device Auditor from Exemplar Global, and Quality Engineer, Quality Manager, and Six Sigma Black Belt from ASQ. After having published three books he is now working on a series of books on risk management. With over 30 years of experience, Chowdhary is a sought-after speaker at national and international conferences.