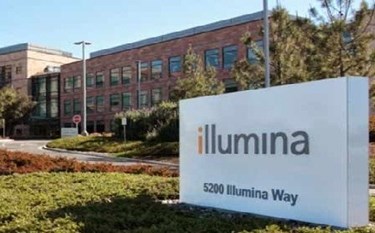 Illumina has announced the launch of a spin off company, named “Grail,” that will develop blood-based cancer diagnostics they aim to market by 2019. Though the technology is not the first of its kind, Illumina claims that its resources and expertise will facilitate the kind of clinical studies needed to validate its products, which can then be marketed for less than $1,000.

Cancers begin with the same DNA sequence as their host, but over time, the DNA begins to mutate, killing or compromising surrounding healthy tissue and blocking human immune responses. By detecting nucleic acids with these tell-tale mutations within the blood, scientists believe that cancer will one day be diagnosed with a “liquid biopsy,” before patients are symptomatic and before tumors could be detected with traditional medical imaging.

“By enabling the early detection of cancer in asymptomatic individuals through a simple blood screen, we aim to massively decrease cancer mortality by detecting the disease at a curable stage,” said Jay Flatley, Illumina CEO and chairman of the board at the newly formed Grail, in a press release.

Investment analysts at Cowen & Co. predicted last summer that successful liquid biopsies will generate $10 billion per year by the end of the decade, and Illumina’s confidence, backed by its proven success in the field with other products, has attracted high-profile investors, such as Bill Gates and Jeff Bezos. Grail’s launch represents an initial $100 million investment — of which Illumina retains the largest share, followed by ARCH Venture Partners, Bezos Expeditions, Bill Gates, and Sutter Hill Ventures.

“Our largest investment ever,” said Robert Nelsen, managing director and co-founder of ARCH Venture Partners, to Forbes. “It remains to be proven, but it’s likely to be the case that you will be able to know deep and large amounts of information about multiple cancers with a single test.”

According to MIT Technology Review, Johns Hopkins University and top laboratories in Hong Kong were among the first to introduce liquid biopsy technology, but early incarnations were far too expensive to be clinically feasible, said Flatley. Advances in the technology will allow Grail to commercialize the technology for less than $1,000 per test.

In September, Pathway Genomics rushed out of the gate with a $699 blood test they claimed could detect cancer in its early stages, but the venture was soon met with controversy. Days after the launch, the FDA issued a warning letter, saying that the company had not performed adequate clinical testing to substantiate its claims.

In order for liquid biopsy technology to be successful, researchers must establish its accuracy. Too many false positives and the test risks putting healthy people through dangerous and unnecessary treatments. False negatives will prevent at-risk patients from seeking early treatment. The technology must not only prove its efficacy, it must also prove its impact on patient outcomes, said Leonard Litchenfeld, deputy chief medical officer of the American Cancer Society, to MIT Technology Review.

Grail will organize clinical trials with as many as 30,000 participants, sequencing and analyzing their DNA hundreds, if not thousands of times over, said Flatley, reemphasizing that Illumina is the only company with the resources to fund the studies and to bring the product to market at an affordable price.

Such a feat — if they pull it off — would be a “turning point in the war on cancer,” said Flatley