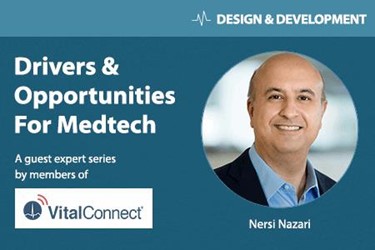 Nearly 25 percent of Americans own a wearable device and use it to improve their health. Such devices are one of the most popular ways to track health data and one of the hottest technology trends on the market. Every year, new devices are released with new features that can track new vital signs important to one’s health.

From a consumer standpoint, many of these devices are fantastic, keeping you motivated and being stylish to wear. Yet few of these wearable devices are actually appropriate for adoption by hospitals. What will wearables need to be in order to be found in the hospitals of the future?

Some wearables claim to use “medical-grade” sensors to ensure the data is accurate. But if a wearable is to be introduced in a hospital, it needs to be at least as accurate as the technology currently used by the hospital to ensure the standard of care is not diminished. Data collected from wearables should be accurate enough to be considered a reliable indicator of health, and thus able to contribute to a healthcare professional’s decision-making.

Practically all medical devices and equipment found in hospitals are approved by the FDA, and hospital wearables are no exception. FDA approval demonstrates that the wearable can be used to assist in clinical decision-making. Moreover, as they are classified as Class II devices, medical wearables may require clinical studies or significant data that demonstrates their safety and efficacy before they can be sold on the market. Finally, FDA-regulated medical device manufacturers’ facilities and operations must meet Good Manufacturing Practices standards, and companies must have a specific plan of action established for if and when device-related adverse events occur.

An ongoing problem in health technology is the largely unmet promise of devices that reduce costs and ease the workload of healthcare workers. One of the major reasons why new technology as a whole is sometimes slowly adopted — or completely rejected — is because it disrupts a user’s mental workflow and becomes more of a nuisance than an aid.

According to a 2011 survey from the American Nurses Association, nearly 75 percent of nurses already are concerned about stress and being overworked; more buttons to press, more screens to look at, and new measurements to decode during rounds would only exacerbate existing stress issues in the workplace. Hospital wearables should naturally integrate into nurses’ workflow, providing clear, actionable information at a glance that simplifies clinicians’ job functions.

Medical wearables also must be able to seamlessly integrate into a hospital’s existing data systems. Wearables should communicate and interact with electronic medical records, other diagnostic systems, billing systems, data capturing and tracking systems, IT and security systems, and other sources. By aiming for interoperability, wearable manufacturers help to create a more efficient, streamlined workflow for all healthcare professionals.

If a hospital wearable should make a nurse’s job less stressful, a disposable form factor is the most convenient. Disposable wearable devices are much simpler to use: nurses should need only to open the packaging and apply the wearable, pair it to a relay device, and dispose of the wearable once finished. There is no need to worry about reconfiguring or repairing a wearable for another patient, recharging or replacing a battery, or placing it out of service for preventative maintenance or recalibration.

Moreover, by designing a hospital wearable with a disposable form factor, many of the issues of device sterility are also mitigated. Nurses will not need to worry about if a device was sterilized and if a wearable was potentially contaminated, a nurse can simply open a replacement device and throw away the used one.

In this way, nurses can spend less time worrying about the technology and more time focusing on their patients.

As the market around user health data management matures, user data privacy and security have become required features for any data platform. A recent report from the Ponemon Institute revealed 64 percent of healthcare organizations reported a successful cyberattack by potentially malicious parties attempting to steal their patients’ medical files in 2016. To ensure the security of hospital wearables, device companies should assess all potential threat agents before, during, and after the wearable is used, and implement appropriate industry security standards where appropriate.

Hospital wearables must adhere to HIPAA standards, so it is imperative to use appropriate levels of data encryption, depending on how accessible data will be. Wireless hospital wearables will need to have end-to-end security, so data is stable and secure as it is transmitted from the wearable device and received by a relay device (and vice-versa). Finally, hospital wearables, especially disposable wearables, should have security measures in effect in the event a device is misplaced, stolen, or discarded.

Captured patient data stored on a device should be kept to a minimum, if possible, and security features should render the device inoperable and the data unrecoverable if certain conditions are met.

Wearable devices are undoubtedly the future of patient monitoring in the clinical setting. Wearables increase patient mobility and comfort, which also helps with recovery. Effective medical wearables also can reduce alarm fatigue in nurses, a phenomenon in which caregivers become desensitized to device alarms. Per American Nurse Today, an 85 percent to 95 percent of alarms require no medical intervention, including those triggered by patients who are annoyed and tear off wires.

A 2015 IDC report forecasted that 70 percent of healthcare organizations worldwide will invest in technology, such as apps, remote monitoring, virtual care, and wearables. A 2016 Accenture report showed 62 percent of doctors surveyed thought wearable devices would increase the overall quality of care for their patients.

The numbers don’t lie, and the potential benefits are vast. There is huge market potential for wearable devices within hospitals and healthcare organizations. It is up to the market to create technologies that maximize value and utility for nurses and doctors. The wearables of the hospital of the future will not replace the human touch of medicine, but rather enable these doctors and nurses to provide better care for their patients.

Previously, Nersi served as CEO of Teranetics Inc. at the request of his fellow co-investors in 2010, where he reorganized executive management and improved business and product plans. Teranetics was acquired by PLX Technology in 2011.

Nersi also founded Pacific General Ventures in 2003, a private venture capital firm that invests in high technology companies. From 1997-2003, he was the founding Vice President of Signal Process Technology at Marvell Semiconductor, Inc. He led the development of the Marvell System-on-Chip (SOC) strategy, which grew to an annual revenue of $2B, as well as key technologies for storage, wired and wireless products.

Nersi served on the board of directors for Emulex Corporation for 4 years prior to its acquisition in 2015 by Avago. He has served on numerous private company and non-profit organization boards over the past 15 years.

He earned a doctorate in electrical engineering from the University of Colorado and has been awarded eight U.S. patents.