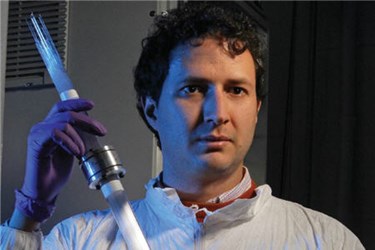 With research support from the University of Central Florida, medical device startup NoNeedles Venipuncture is working to develop a new device that uses lasers instead of needles to collect blood samples.

“Our design of this instrument is intended to improve the process of performing a venipuncture — such that the quality will be better and the cost will be lower,” Calvin Wiese, president of NoNeedles Venipuncture, said in an article published recently in the magazine florida.HIGH.TECH. “We’re fairly confident that if we can get the technology to work the way we expect it to, it will be universally adopted.”

According to the article, the device fires a specialized laser beam at a section of a patient’s skin for one quadrillionth of a second. In that time, the laser creates a microscopic opening into the vein. A collection port then connects to the bloodstream, and a blood sample is gathered. To complete the process, the laser is again fired, but this time to seal the opening and ensure that no bleeding occurs.

“What excites me most about this project is to see the vast potential of lasers,” said Amezcua Correa, an assistant professor of optics at the University of Central Florida who is involved with the project. “Every day you see more applications. If you use lasers to cure some medical conditions or make common procedures easier, that’s very exciting to me.”

The new device was initially designed as a way to effectively and safely draw blood samples from people with trypanophobia — the fear of needles — according to the article.

In addition to this main function, researchers involved with the project said that the device could also carry a variety of other potential benefits.

“NoNeedles Venipuncture’s process also represents a vast improvement over current laser tissue methods, such as those used in laser tattoo removal, which require a large laser pulse that uses a lot of energy and often burns patients’ skin,” the article said. “In addition to the obvious benefits of eliminating pain and the ‘scare factor’ many patients experience, a needleless system would also provide a much lower risk of contamination from blood-borne pathogens.”

Researchers and developers throughout the medical device industry continue exploring the possible applications of lasers in medical devices. Earlier this month, for example, scientists in Japan developed a technique to use lasers to guide drug-carrying nanoparticles to specific sites inside the body.