Making A Hard Choice To Thrive 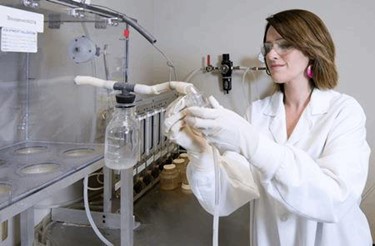 A December 2016 press release announced that Cosmed Group had acquired an ethylene oxide sterilization operation in Erie, PA from iuvo BioScience. I could easily have overlooked it in my crowded email inbox, but “wait,” I thought; “I know iuvo BioScience. That’s Ben Burton’s company.” So, I flagged the release and put Burton on my call list to follow up.

I initially met Burton, iuvo BioScience’s president and CEO, at MD&M East 2015. The consulting firm I worked for at that time was presenting a ‘lunch & learn’ session at the conference, and Burton was there to network and generate visibility for his new company. iuvo BioScience was formed in March 2015 through the acquisitions of a life science laboratory facility in Rush, N.Y., and an ethylene oxide sterilization facility in Erie, PA — both of which had been owned by Moog, Inc. The Rush, N.Y. lab, which currently serves as iuvo BioScience’s primary location, has operated continuously since 1978, when it was founded as Sterilization Testing Services (STS).

I asked Burton about the original vision for iuvo BioScience. He explained that he and Mary Richardson, iuvo’s executive VP and chief scientific officer, had a strategic interest on the laboratory side. The pair knew each other well, having previously worked together at Bausch & Lomb. “Mary and I wanted to create a different kind of contract research organization (CRO). Sure, we provide pre-clinical services, analytical chemistry, and microbiology testing, among other things, but we consider iuvo BioScience a partner research organization (PRO),” Burton explained. “We look to engage early with a client and begin with dialogue.”

He provided an example of a client who asked for a guinea pig maximization test. “We asked the client to take a step back and let us ask a few questions: What are you trying to achieve? What type of device do you have? What type of material? What about chemical characterization of the material? Ensuring biocompatibility begins with an understanding of the materials and chemicals that are present,” Burton explained.

Iuvo’s PRO approach seems to be resonating with its clients. Since beginning operations in 2015, the company experienced 25 percent growth in its number of clients in year one, and an equivalent increase in its second year of operation, which concluded this month.

So, if everything has been going so well, why did iuvo BioScience divest the sterilization portion of the business? In a word – focus.

“We started thinking about strategic growth and where to spend capital dollars. We realized that keeping both facilities would limit our ability to invest in both. Both could survive, but with only one, we could thrive. Talking with our customers, they indicated their needs were centered on our laboratory business,” Burton said. “The sterilization facility was an offshoot business to iuvo, but it is part of the core business of Cosmed. The divestiture allowed us to invest in analytical chemistry, set us up to seek a new facility in 2017, and enables us to explore merger and acquisition opportunities.”

In addition, iuvo maintains a partnership with Cosmed, providing laboratory services for the sterilization business, as well as directly serving customers in the medical device and pharmaceutical industries.

I asked Burton to give me some examples of how iuvo’s PRO approach can make a difference for its clients. He mentioned that clients can have one of iuvo’s experts either on the phone or at the table for FDA pre-submission meetings. From experience, I can relate: Having the right people in the pre-sub can be the difference between frustration and confusion or a clear path forward. Burton also mentioned iuvo’s focus on risk management. For example, when considering pre-clinical toxicology risk related to a product change that includes a different material, iuvo can evaluate the need for extractible or leachable testing, and consider whether an expert could prepare a white paper to document minimal risk and avoid the testing.

Noticing that iuvo BioScience offers reusable medical device testing, I asked Burton’s opinion on some of the current concerns around reuse of medical devices, such as endoscopes. “Given the cost of these devices, the current practice of cleaning and reusing them is not going away. But the challenge is not limited to validating the cleaning process prior to reuse,” Burton responded. He believes that reusable devices must be designed with cleaning in mind, and iuvo has worked with clients during development to ensure that material selection, necessary miniaturization, and complex geometry will not present insurmountable challenges to the cleaning or sterilization processes. iuvo also has worked with clients to optimize the manufacturer instructions for use, to ensure effective cleaning.

Finally, I asked Burton about iuvo’s secret to success. He quickly responded that it’s the expertise of his team. The company benefited from the skill of staff that was retained when the life science laboratory was acquired from Moog. In addition, the staff has been growing about 10-15 percent annually. When recruiting to grow the team, iuvo creates engaging roles and conducts nationwide searches to identify and attract the best talent. The company often finds candidates who work at larger companies, but are looking for something smaller and less bureaucratic, where they can make a real difference for customers.

They, too, make a choice to thrive, rather than just survive.