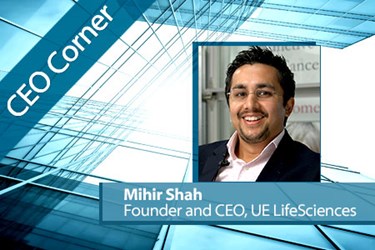 The global statistics surrounding breast cancer are staggering. It is by far the most common form of cancer among women worldwide, with nearly 1.7 million new cases diagnosed and over 500,000 deaths reported in 2012 (the most recent year analyzed by the World Health Organization). In developed countries like the United States, widespread access to early detection and treatment has resulted in decreased mortality. But in developing countries, breast cancer rates are on the rise and survival rates are much lower, primarily because mammography is either unavailable or prohibitively expensive.

In honor of Breast Cancer Awareness Month, this month’s CEO Corner profiles the founder of a breast cancer diagnostics company whose mission is to provide less-expensive, easy-to-use screening tools to the developing world — and radiation- and pain-free options to specific patient groups in the U.S. Mihir Shah, CEO of UE LifeSciences, recently told me the story about how his company began, the struggles it faced in bringing its products to market, and the strategies it used to overcome those challenges.

I naturally gravitated toward learning more about the disease, how it is detected and treated, its epidemiology, and related policies and efforts. Connecting the dots, I discovered that breast cancer was growing at a rapid pace across the world and that the vast majority of women had no access to mechanisms of early detection. My major epiphany was in realizing that the standard of care for early breast cancer detection — mammographic screening — was simply unadoptable in most densely populated developing countries, including India, China, Mexico, and others.

One out of every eight women in United States will be diagnosed with breast cancer in her lifetime, and the odds for women in developing countries that are now Westernizing are rapidly getting worse. These regions are densely populated, with several of them housing more than a billion people. India, for example, has already reached a one-in-25 lifetime risk for developing breast cancer as its national average, and the real numbers are probably worse, because they don't do a good job of keeping track of their health registries.

While 90% of U.S. women survive breast cancer past five years, there are niche challenges here at home as well. Mammograms are not equally effective for all women, especially for women with dense breasts. For most women, routine mammograms don’t begin until the age of 40, although breast cancer does occur in women at younger ages. Also, high-risk patients can’t receive recurring mammograms throughout the year, due to radiation risk, so there are limitations to the approach. That's why we're doing what we're doing.

Apart from the strong evidence of need and potential opportunity, I was encouraged to start UE LifeSciences after meeting New York University (NYU) professor Matthew Campisi, who would eventually become our cofounder and CTO. He was already focused on solving this problem from technological standpoint and had been working on developing noninvasive technologies for early detection of breast cancer for more than five years before I met him. It gave me a lot of confidence to have him by my side in starting the company.

MDO: What did your process look like for transitioning your idea into an actual product?

Shah: First, we put together a framework within which a portfolio of innovative solutions could be developed, learning what doesn't work and what wouldn't work in underserved communities where resources are scarce. This was necessary because the guiding principles of the design process had to be in line with the limitations and requirements on the ground.

For example, the typical “user” would be a community health worker — a primary care physician, nurse, or social worker — who is not an expert in radiology or high-end medical equipment. We had to consider things like the limited network bandwidth through which data has to pass on a daily basis, poor power conditions, and the per-use cost of the test and life-cycle cost of the product, which not only includes the equipment purchase but also the cost to maintain the equipment, the staff to operate and manage it, etc.

Once we had developed a framework, I started to evaluate various sensing mechanisms. In my research, I looked at Doppler ultrasound, bioelectrical impedance, tactile, contact thermography, and infrared (IR) sensors. My goal was to identify a mature sensor that readily worked within my framework.

The process of elimination revealed a clear choice, and we started with IR imaging. This platform offered sensors manufactured by a Fortune 500 company with a readily available global network of service stations. In addition, the IR platform does not require any physical contact with the body and was able to provide results at the point-of-care. I could envision a software and hardware package that was easy enough for community health workers to learn and provide at local level. It was during this period of research into the platform that I ran into Matt, who was then a professor of electronics and electrical engineering at NYU Polytechnic School of Engineering. Matt brought a solid experience base to kick-start the design process.

We weren’t the first to use IR imaging for breast cancer detection — others had tried and had limited success or had failed. So I learned from their mistakes, as well. For example, one of the issues with IR imaging was that the interpretation of images was very subjective without standardization.

All of this research and brainstorming was conducted before day one at the office. The path to building our first product started with a lot of information and insights, and a small-but-capable team.

MDO: Speaking of products, please tell us about your devices.

Shah: UE LifeSciences has developed two complementary medical device technologies that are low-cost, noninvasive, and easy to use by primary-care health workers.

NoTouch BreastScan is the latest innovation in the field of digital IR breast imaging. As a fully automated system, it offers touchless and radiation-free breast evaluation for women of all ages. Incorporating a novel dual-IR sensor feature and automated software analytics, the system is easy to operate and enables repeatable reporting without the need for extensive training or radiological expertise. NoTouch BreastScan is FDA cleared and CE registered for the purposes of “adjunctive screening for the detection of breast cancer.” Three clinical studies have been conducted with NoTouch BreastScan technology to show high sensitivity to detect early stage breast cancers. We now have 30+ units sold, and 5,000+ scans have been performed in seven countries to date.

Our second product, which is currently under development, is called iBreastExam (iBE). It is a handheld, wireless, battery-powered breast scanner. iBE can detect naturally stiffer malignant tumors using an array of patented tactile sensors that measure tissue elasticity differences from the skin’s surface. The first clinical study evaluating iBE technology was recently published in the Journal of the American College of Surgeons (Volume 216, Issue 6, pp. 1168-1173, June 2013). This study demonstrated that iBE technology can confidently detect invasive lesions/tumors that the physician cannot feel with his hands (meaning non-palpable lesions). The device also performed very well in the younger age group (below 40) in detecting small masses. In August 2012, we won a $878,000 commercialization grant from the Pennsylvania Department of Health to further develop and commercialize the iBE sensor technology.

MDO: It’s interesting that you used completely different sensor technologies for your two devices. What challenges has that presented? How have you overcome those challenges?

Shah: We are developing a product portfolio that appeals to a diverse range of customers (from individual clinicians to large public health agencies), serves urban as well as rural requirements, and is sustainable in markets with varying healthcare resources. We want to create products that are complementary with one another and offer greater clinical value when combined.

There are various challenges with this approach for any small or midsize company: limited resources, amplified clinical and regulatory battles, pricing and distribution, and sometimes even product cannibalization. By design, we have spaced our commercialization pipeline such that we are not working on the same challenge for two products at the same time. So while you are fighting sales targets for one product, you are busy with a validation study for another. To be perfectly honest, we don’t have it down to a science yet, but we constantly learn from our mistakes and leaders like Apple and GE with vast portfolios.

iBreastExam (iBE) is a wireless, handheld unit that can detect tumors through tissue elasticity measurements from the skin’s surface.

MDO: How have you raised the capital to develop your products? Did you take any unique approaches?

Shah: We have funded operations through a variety of sources, including product sales, grants and accelerator programs, crowdfunding, angel investment, and personal loans. As a growing company, we have attempted to identify funding sources that were both focused towards our growth goals and also effective in helping us meet risky challenges like regulatory barriers, clinical validation, etc. I think every CEO would prefer non-dilutive sources like sales and grants over equity or debt financing — however, one has to be open-minded and practical.

MDO: What strategies did you use to gain initial market traction for your devices?

Shah: We started off by identifying strategically important regions and focused on just one or two areas where we could perform local validation and have domestic representation, either by way of a distributor or a clinical champion. This creates a local cell that serves as the epicenter for that region. Then we kick off regulatory, key opinion leader engagement, and sales and marketing efforts. We have also approached local nonprofits and public health agencies, as well as participated at local events to enhance name recognition. The most important strategy is to identify paying customers and keep them happy.

MDO: What’s next for UE LifeSciences, in terms of major initiatives or goals?

Last year, we announced the WeMustTry.com campaign. We want to help develop an inherently new standard of care for breast cancer screening in the developing world. For the most part, “early detection” is not possible in these parts of the world. We have the technology; what we need now is application of the technology at scale. Our goal is to screen 25,000 healthy women that have never been screened for breast cancer.

We have started to look for suitable partners in the form of governmental health agencies, clinicians, and public health systems that would like to pilot our tools and technologies and truly assess and validate the impact it makes. There is a lot of interest globally. Now, it’s time for action!