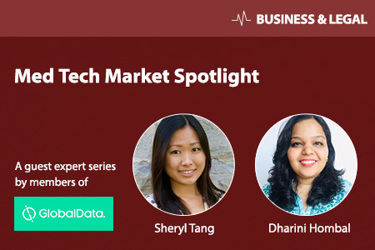 Peripheral artery disease (PAD) is characterized by the narrowing of arteries in the periphery due to the build-up of plaque. GlobalData estimates that the prevalence of PAD is between 8 and 10 percent worldwide, and continues to grow each year1.

PTA (percutaneous transluminal angioplasty) balloon catheters have now become the minimally-invasive device of choice for severe cases of PAD — particularly in small vessels below the knee, due to the tortuous nature and difficulty in stent placement there. Furthermore, balloon catheters are used for management of in-stent restenosis. In 2018, a meta-analysis published by Katsanos et al. suggested a potential link between the use of paclitaxel-coated devices and an increased risk of late mortality2.

This article analyzes the PTA balloon catheters market in the wake of the meta-analysis and updated FDA and MHRA guidelines.

Currently, two types of drugs are used for drug-coated devices on the market: Paclitaxel and Sirolimus. In studies, sirolimus-eluting stents have exhibited superiority over paclitaxel-eluting stents and could offer potential benefits over the current paclitaxel balloons. While both drugs are anti-restenotic, the SABRE trial suggests that a wider therapeutic range and sirolimus’ anti-inflammatory properties make it a safer alternative to paclitaxel3,4. The majority of DCBs, however, remain paclitaxel-based, given that drug’s faster absorption rate and longer retention rate compared to sirolimus. The recent development of nanolute and nanoactive technology in sirolimius balloons aims to overcome these delivery challenges.

Following publication of the meta-analysis in 2018, there was an increase in activity within the scientific community, governing bodies, and manufacturers. Several patient-level studies were published showing no link between increased mortality and paclitaxel-coated devices. The meta-analysis prompted the FDA to conduct a preliminary pooled analysis of pivotal premarket RCTs and identified a potential link between increased long-term mortality and paclitaxel-coated balloons. However, both the FDA and PCR, while advising caution surrounding the use of these devices, have issued statements supporting continuous use on a best-judgement basis pending more definitive data. 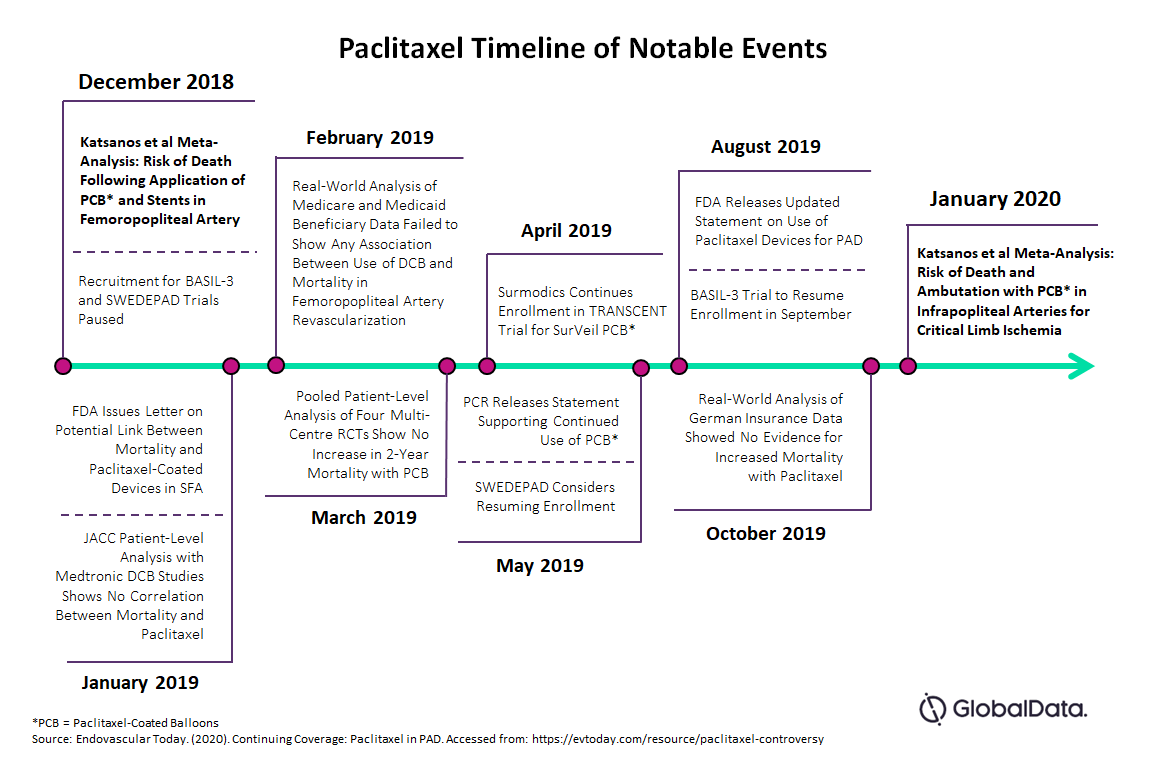 Even amidst doubts regarding the safety of PCB catheters, balloon angioplasty remains the treatment of choice for PAD; consequently, we expect that the PTA balloon catheters market will show positive growth in all adoption scenarios. This section will explore high-, medium-, and low-level adoption rate scenarios based on several factors to determine the overall opportunity of the market in the U.S., four major EU countries (France, Germany, Italy, Spain), and the U.K. 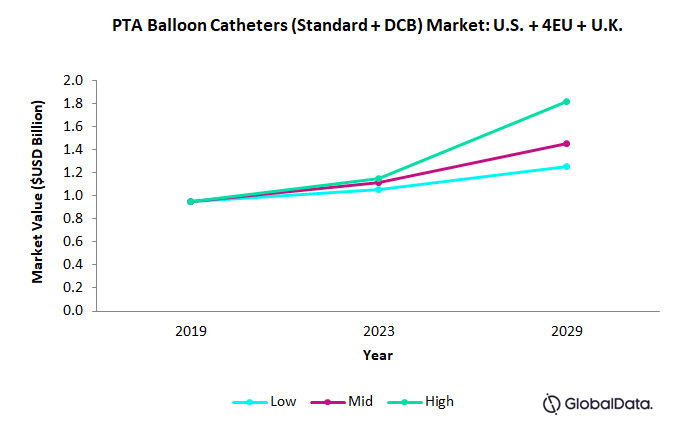 In a low-level adoption scenario, we predict the PTA market will grow at a compound annual growth rate (CAGR) of 2.5 percent from 2019 to 2023. The growth rates are expected to increase slightly in the period 2023-2029, achieving a CAGR of 3 percent.

The adoption rate is based on the following assumptions:

The following assumptions were used to estimate the high adoption rate:

The mid-level adoption rate was inferred based on the following assumptions:

The U.S., “EU four,” and U.K. markets are currently dominated by BD and Medtronic. Boston Scientific lags behind due to its absence from the U.S. DCB market but, with the Ranger DCB catheter under FDA review, the scenario might change in the future. 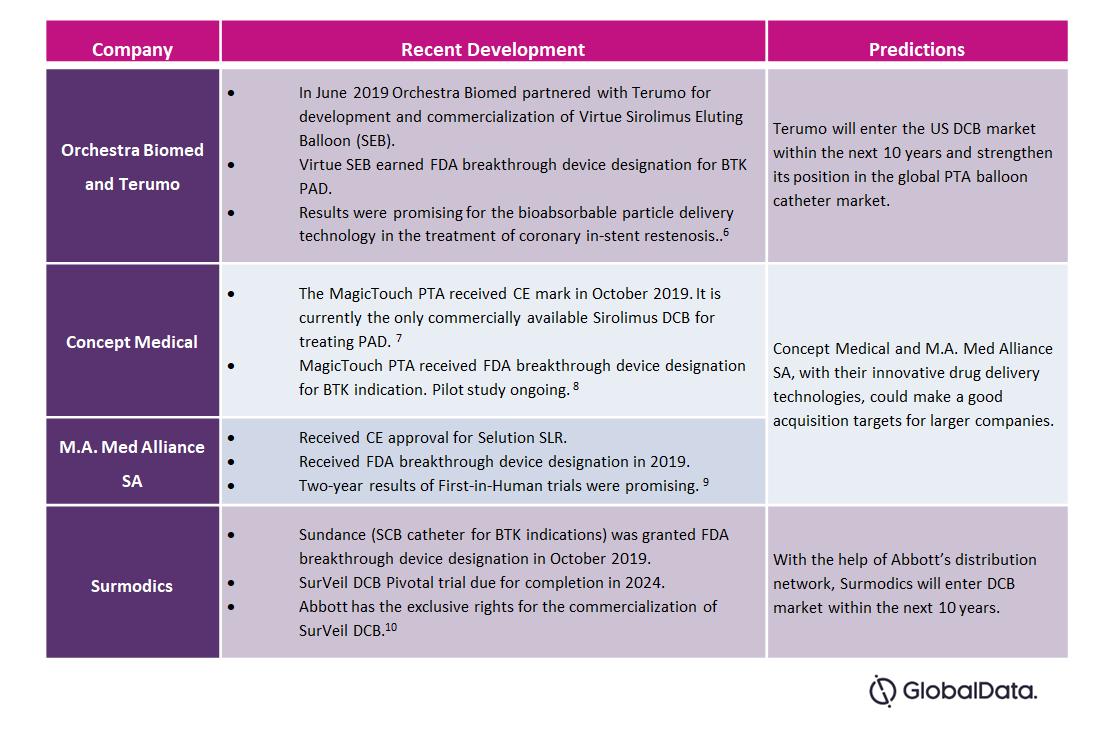 With uncertainty surrounding the safety of PCB catheters, an opportunity has been created in the market that can be beneficial for companies with SCB catheters. Provided the slow tissue absorption rates associated with sirolimus can be overcome, GlobalData expects the following changes in the competitive landscape:

The PTA balloon catheters market outlook is constantly changing due to a scientific community actively seeking definitive evidence of a link between mortality and paclitaxel-coated devices, as well as advancements in the devices themselves. In addition to its potential use of an alternative drug (sirolimus), several other factors may affect this market’s future:

While numerous studies have been published since 2018 showing no statistically significant link between increased mortality and paclitaxel, its adoption continues to drop due to heightened concerns placing patient safety first, despite a lack of definitive data. GlobalData expects that until more studies — both from real-world patient data and randomized controlled trials — are able to provide concrete evidence that there is no causation mechanism and no link to increased mortality, the adoption of paclitaxel-coated devices will decline.

Sheryl Tang is a principal medical devices analyst at GlobalData Healthcare specializing in cardiovascular and neurology devices. She has acquired an in-depth understanding of both markets and currently manages the research and development of syndicated market forecast models across 39 countries, as well as being the lead analyst for cardiovascular or neurology-specific consulting projects. As a Master of Public Health graduate from Queen’s University, Sheryl has a strong background in epidemiology in addition to her expertise in market research.