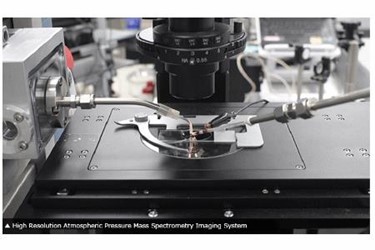 A team of researchers at DGIST has recently developed a technology which enables to acquire a high resolution mass spectrometry imaging in micrometer size of live biological samples without chemical pretreatment in the general atmospheric pressure environment.

This achievement has been led by Professor Dae Won Moon and Dr. Jae Young Kim from the department of New Biology at DGIST. The study demonstrates a high resolution mass spectrometry imaging system capable of analyzing live biological samples at a resolution of several micrometers (㎛).

Researcher typically use an ion beam desorption system or a laser desorption method, in which biomolecule samples are separated in a vacuum state, to obtain a high-resolution mass spectrometric image. However, in order to accurately analyze the sample by placing it in a vacuum chamber, pretreatment processes such as cutting the frozen samples or chemical treatment were required. In the process, side effects such as damaging the samples or loss of molecular information occurred.

Although researches on mass spectrometry and mass spectrometry imaging methods in the atmospheric pressure environment have been carried out around the world over the last 10 years, they have not been directly applied in biomedical science and medical areas due to the performance limitation of ionizing biological samples under atmospheric pressure,

In order to solve engineering problems that may occur during atmospheric pressure ionization mass spectrometry of biological samples, they added ion transmission device, a laser focusing lens, a 2D scanning stage, and a signal synchronization circuit between devices and completed the system.

Using this system, about 250 biomolecule substances were extracted from hippocampal tissue sections of mouse brain, and mass spectrometry imaging with resolution of 3 μm or less was obtained from 10 biomolecule materials. In addition, adjacent tissue sections taken from the same rats were used to determine the effectiveness of the drug at the biopsy level.

Through the findings of this study, it is expected that the reliability of new drug development can be improved and the sacrifice of laboratory animals can be reduced by using a mass spectrometry imaging system as an organization-based drug screening technology.

Professor Moon stated “You can acquire a large amount of undamaged biomolecule information from biological samples that have metabolic activity. At the same time, you can visualize it in high-resolution. Therefore, this technology will significantly contribute to molecular biology research.” He also added “We will carry out further studies to widen the molecular weight range that are detectable in the sample and utilize them in the field of medical diagnosis such as development of new drug screening and mass spectrometric endoscopy.”