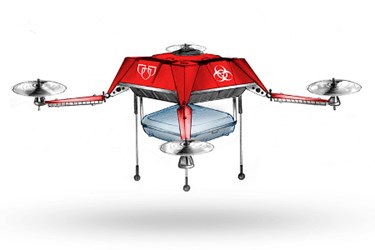 With companies like Google and Amazon testing ways of integrating unmanned aerial vehicles (UAVs) into their business models, experts say that commercial applications for these so-called “drones” are inevitable. But do UAVs have a place in the medical field?

This month, the FAA released a roadmap for the eventual integration of UAVs into U.S. airspace. Because of the high-volume traffic already in the air over American soil, the FAA says that it is taking an “incremental approach to safe unmanned aerial system integration.”

According to a recently published Mayo Clinic article, the initial medical application for UAVs will most likely be emergency disaster relief. Test programs have already been used in Haiti in the aftermath of the 2012 earthquake, and to deliver tuberculosis test samples to a large coastal city in Papua New Guinea.

The Mayo Clinic article points out that UAV systems would not have to risk the lives of a flight crew when traveling over rough terrain where there may not be a safe place to land.

In a study published in Air Medical Journal, researchers stated, “Currently, the transportation of medical goods in times of critical need is limited to wheeled motor vehicles and manned aircraft, options that can be costly and slow.”

The UAVs under discussion are much smaller than their military counterparts and require little to no landing space. Their travel range is between 20 and 60 miles, and they can stay in the air for up to an hour with a payload limited to 5 pounds. They can be operated manually from the ground, or they can have a preprogrammed route. The total cost for such a system is around $10,000.

Cornelius Thiels, D.O., a Mayo Clinic surgeon, commented in the article that UAVs could provide blood delivery service, a critical need for smaller hospitals that do not have a large supply of blood on hand due to its expense and short shelf-life. Additionally, drones could deliver expensive and rarely used medications that hospitals do not always have in stock.

“Our advanced transport team makes about 2,000 flights a year and in 2013 delivered more than 200 unites of packed red blood cells and 200 units of plasma, so the need for prehospital blood products is clear,” said Thiels. “Helicopter and even ambulance transport is extremely expensive, whereas the cost of flying a UAV is really low — dollars per trip.”

Last year, Med Device Online reported that a new start-up company called Matternet was developing a medical aid delivery system using UAVs and is hoping to launch their program in other countries later this year.

A research team from Netherlands Delft University of Technology recently published an article that explored the potential for UAV delivered defibrillators, a technology that could cut response times by up to 90 percent.

Issues such as temperature control for medical supplies, airspace safety, and security against accidental or deliberate tampering still need to be worked out, but the Mayo Clinic concludes that the idea of UAV delivery systems does hold significant promise for the medical industry.