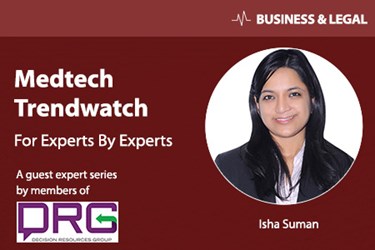 This article is the second in a two-part series on growth opportunities in India’s emerging medtech market. Read part one here.

India’s emerging economy represents significant opportunities for medtech companies and, as Boston Scientific’s recent decision to establish an R&D center there illustrates, India is increasingly drawing the attention and efforts of major players in this space. However, companies interested in the Indian market need to be aware of the impact of India’s unique opportunities — and needs — in different segments of the market.

Boston Consulting Group’s (BCG) growth share matrices for India’s medical consumable and implant markets provide a visual comparison of product segments by relative market share and market growth, but understanding why certain products are selling better than others requires delving into the demographic, economic, and regulatory factors influencing the Indian market. This information can provide valuable guidance to companies looking to make informed decisions about manufacturing and marketing medical devices in India.

Needles and syringes account for the largest portion of India’s medical consumables market. It is interesting to note that, despite a widely held belief that syringe reuse is common in India, disposable syringes and needles lead this market segment, with revenues for these products increasing at a CAGR of around 15 percent, while market growth for reusable needles and syringes has slowed for the past five years and now stands at just 2 percent per year. India’s Union Ministry of Health has mandated that public health systems use disposable syringes for immunization and other programs, which has contributed to the large size of the overall needle and syringe market in India. 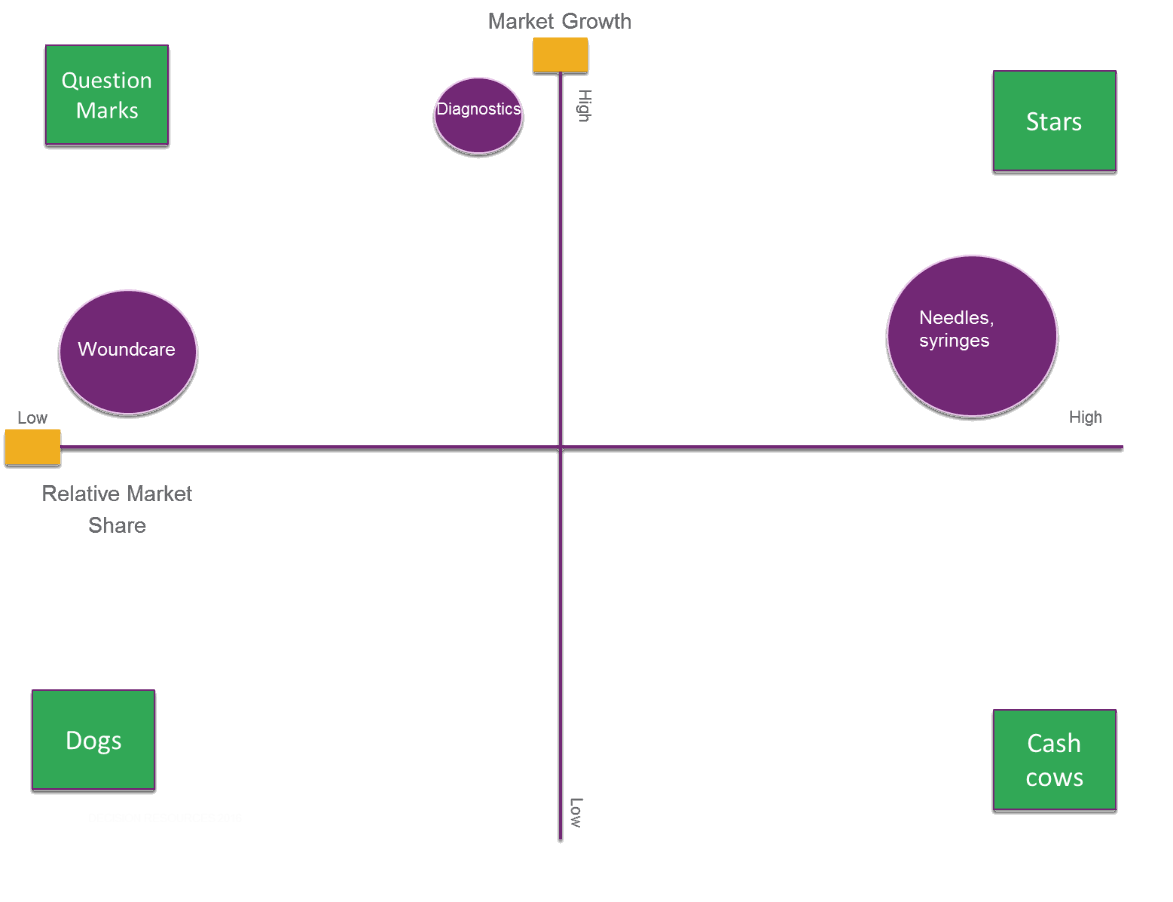 Diagnostic consumables are witnessing the highest market growth in the Indian medical consumables market, with revenues increasing at a CAGR of around 20 percent. This is primarily due to two factors: First, and increasing number of multinational corporations (MNCs) are establishing diagnostic centers in India and, second, patient education programs, run by pharmaceutical companies, hospitals, and the Indian government, are raising awareness of a number of diseases.

Additionally, flourishing medical tourism in India is spurring growth in this segment. Because of India’s relatively low healthcare prices, the number of foreign visitors seeking treatment in India has risen in recent years, contributing to growth in the diagnostic consumable segment, particularly in the pathology and imaging subsegments.  The graph below shows a comparison of procedure prices in different countries. 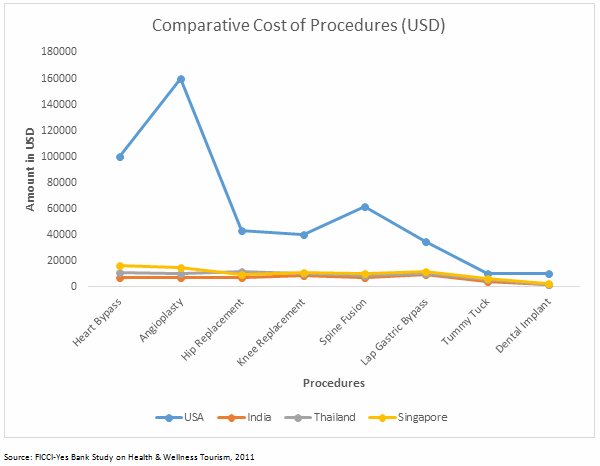 By contrast, the use of advanced wound care products is limited to multispecialty hospitals in urban centers and to specific cases, such as diabetic and burn wounds, with only 15 to 20 percent of advanced wound care consumables used for general surgeries. Growth in this segment is moderate and can be attributed to the development of newer technologies for surgical wound recovery and an increase in the number of multispecialty hospitals in India. The advanced wound care market is mostly dominated by MNCs with premium-priced products, and these competitors are in an advantageous position: in time, the market will shift more toward advanced care devices. In light of this, domestic companies, which generally focus on traditional wound care, will need to develop innovative products in the advanced care segment to retain their market positions. 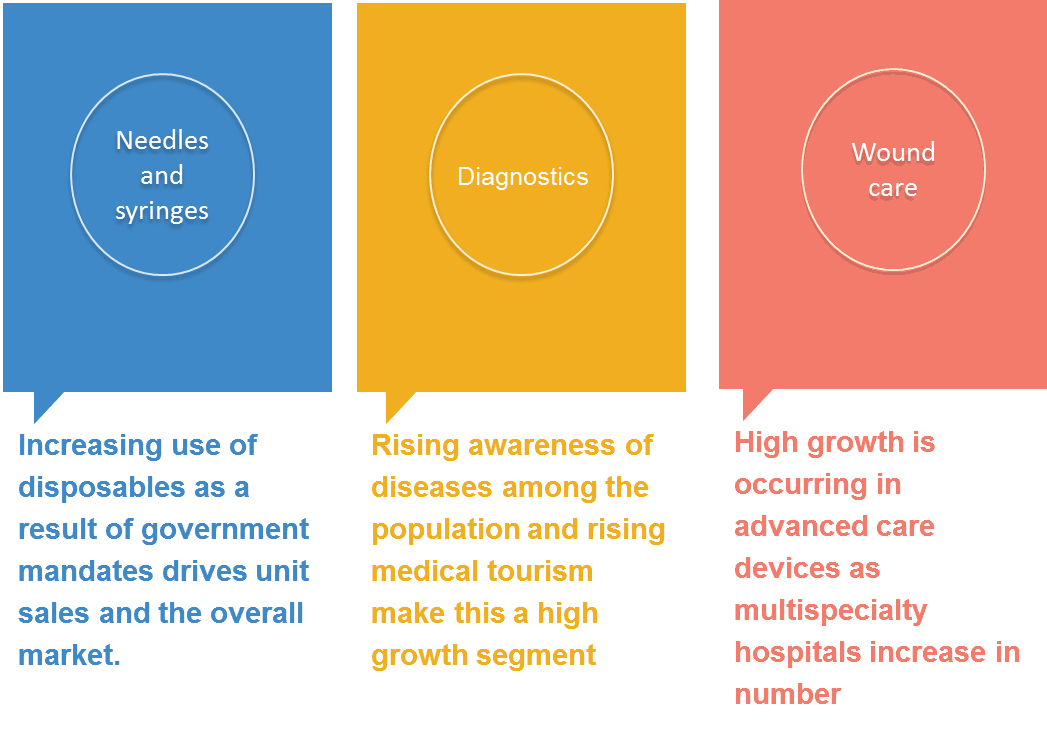 Joint replacement volumes — and therefore sales of orthopedic implants — have been limited by a lack of awareness about these procedures. As a result, many patients are reluctant to undergo the long recovery times associated with these surgeries, and fear the potential added costs of future procedures due to wear on the implant over time, which can necessitate a replacement. However, increasing cases of arthritis among the Indian population are resulting in a corresponding increase in the demand for artificial joints. As a result, the orthopedic implant market in India is poised to grow at a CAGR of around 25 percent. 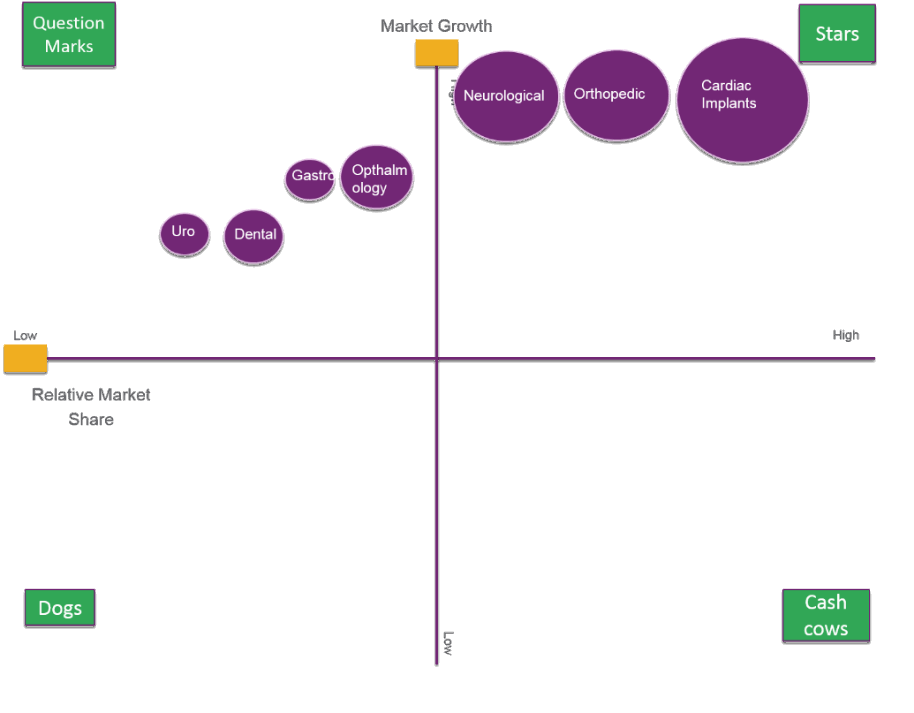 Except for the arthroscope segment, which is dominated by MNCs, there is a mix of local and MNC players in the orthopedic implant market in India, with stiff price competition. However, the local competitors lack the resources to offer product portfolios as varied as those of MNCs, which helps the latter to differentiate its devices and secure share.

The low number of ophthalmologists in India inhibits growth in the ophthalmologic implant segment. Although there is a high prevalence of diabetes in India, resulting in a large number of diabetic retinopathy patients, there are only 14,000 ophthalmologists — most of whom are located in urban areas — for India’s 1.2-billion person population. As a result, there is lack of access to care, thus limiting the market.

Among emerging markets, rural India has the lowest rates of gastric cancer, leading to low procedure volumes and limited implant use. However, the increasing prevalence of lifestyle-related disorders in urban areas indicates that there will be slight growth in the gastro implant market in the future.

The dental implant market is one of the most attractive segments in the Indian implant market, growing at a CAGR of nearly 5 percent. This is due to the increasing number of dental clinics and laboratories in India, and to decreased customs duty on dental implants, which is driving larger import volumes. Around 5,000 dental laboratories currently exist in India, and up to 15,000 new practices are opened every year.

Additionally, dental screening camps, run by hospitals and corporations, have led to a high awareness of dental disorders in India. However, there is a limited supply of dentists in India. Only 32 colleges offer dental degrees; consequently, there currently are only 180,000 practicing dentists in India, which clearly highlights the gap between supply and demand for dental care. 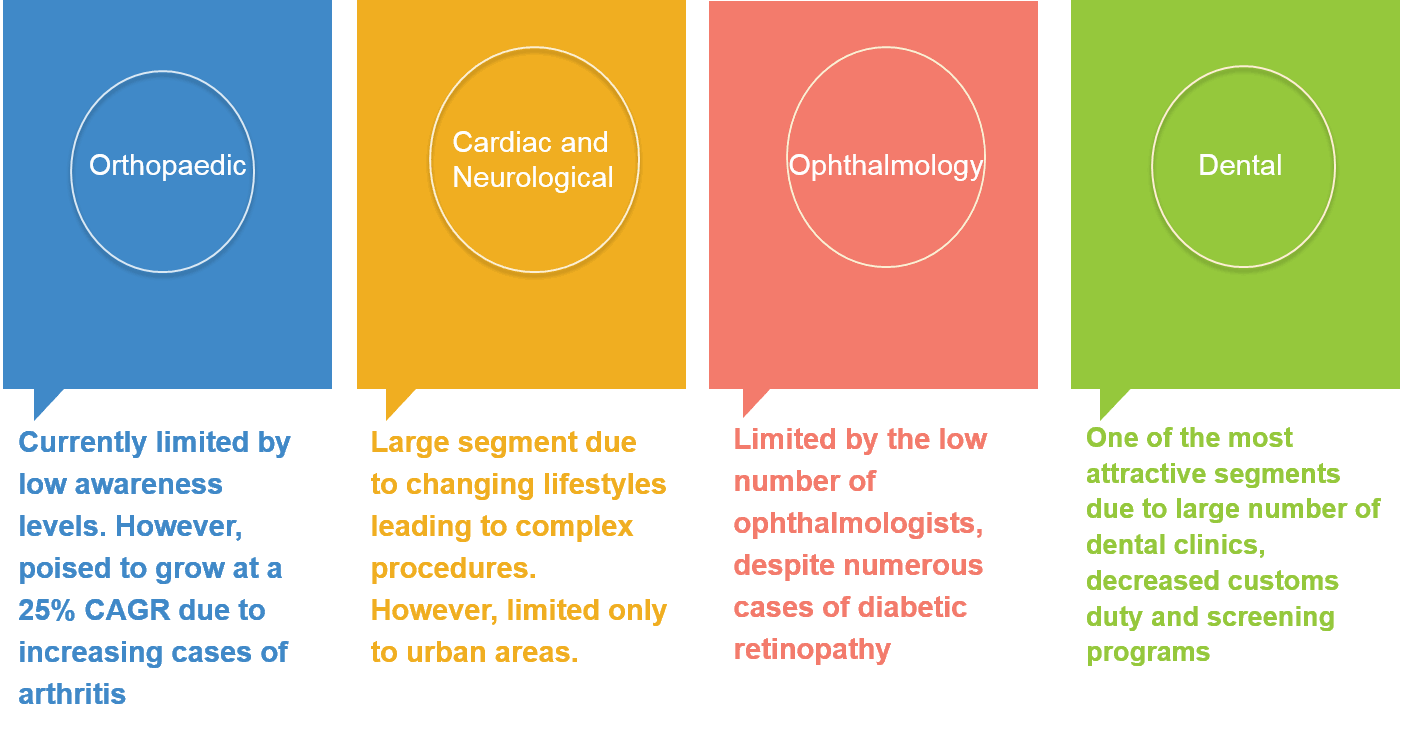 Guided by these insights, medtech companies setting up their R&D hubs in India can understand what segments to compete in and how. For example, neurological and cardiac implants have less competition from domestic players, so there is less price competition in these segments. However, for orthopedic implants, due to the presence of a large number of players, there is extensive price competition, and hence MNCs should either bundle their products with other devices in high-priced segments, or offer their devices at lower prices. Proper planning from a segment perspective can prove profitable for companies in long run, and justify the amount of investment required to set up direct R&D in India.

Read part one of this two-part series — which covers surgical instruments, digital devices, and diagnostics — here.

Isha Suman is a team lead, Research and Operations, at Decision Resources Group. She works on syndicated market research reports for medtech in the endoscopy division of the company. Isha holds a postgraduate degree in marketing from Indian Institute of Management and a bachelor’s degree in telecommunications from Visvesvariah Technological University