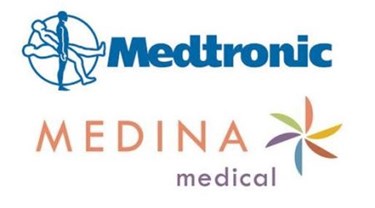 Medtronic continued its buying spree of early-stage device technologies with the recent acquisition of Menlo Park, Calif.-based Medina Medical, which has developed an embolization device for treatment of cerebral aneurysm, a major cause of hemorrhagic stroke.

The all-cash deal to acquire Medina, in which Medtronic previously held an ownership stake, consists of an initial payment of $150 million, plus additional amounts contingent on unspecified milestones, according to a statement from Medtronic.

"Medtronic is committed to fighting stroke through the innovative therapies we bring to clinicians and patients. Medina Medical's breakthrough technology makes it a natural fit with our Neurovascular portfolio, further strengthening our hemorrhagic stroke portfolio," stated Brett Wall, president of the Neurovascular division, which is part of the Restorative Therapies Group at Medtronic. "The Medina embolization device features advanced technology to treat cerebral aneurysms that we think can one day disrupt the coil market."

Medina's device is an intrasaccular, 3D self-expandable mesh that provides a scaffold across the aneurysm neck, conforms to the shape of the aneurysm, and reduces blood flow, thereby lowering the risk of ruptures that lead to hemorrhagic strokes.

According to Medtronic, approximately 6 million people in the United States have an aneurysm, and the majority of those cases are undetected and unruptured. Annually, more than 35,000 patients are treated endovascularly, while some 21,000 are treated surgically.

Medina's implant has gained CE Mark authorization for commercial distribution in the European Union, but is not currently available in the U.S. market. The product will be folded into Medtronic's Neurovascular division within the Restorative Therapies Group.

Medtronic's purchase of Medina Medical ends a billion-dollar-buyout summer for the medtech giant which, including the Medina deal, has now racked up $1.04 billion in deals since June, according to a report from the Minneapolis/St. Paul Business Journal.

Medtronic considers the acquisition of startups a vital part of its M&A strategy. As Medtronic CEO Omar Ishrak told analysts in a conference call in June, the company plans to use the additional cash from its merger with Covidien "to look at early technologies, in the U.S. primarily, where there may be opportunities which we haven't been able to participate in to the degree that we’d like to, to create a long-term technology pipeline of early stage technologies that we think can make a difference."

With its $50 billion deal to purchase Covidien, Medtronic has overtaken Johnson & Johnson to take the biggest market share of medical devices.