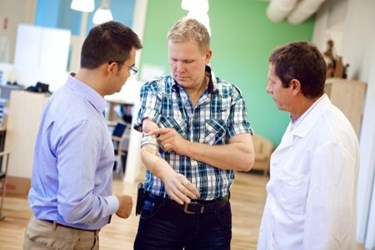 For the first time, a prosthetic device that can be used on a daily basis has been incorporated into a patient’s neuromuscular system. In addition to actively responding to neural implants, this breakthrough system allows sensation to be transferred from the prosthesis to the patient.

Crossing the skin barrier in a long-term way is challenging due to infection and risk to the patient. Certain transcutaneous skeletal implant technologies have been undergoing development for some time and seem to be sustainable. Implants like these represent a tremendous step forward for prosthetics, as they allow for a greater integration with the patient’s skeletal system, which means greater control.

While transcutaneous skeletal attachment has essentially been reduced to practice, transcutaneous communication has not. According to a recent press release, however, this area has now taken a significant step forward.

“We have used osseointegration to create a long-term stable fusion between man and machine, where we have integrated them at different levels,” said Max Ortiz Catalan, research scientist at Chalmers University of Technology, in the press release. “The artificial arm is directly attached to the skeleton, thus providing mechanical stability. Then the human’s biological control system, that is nerves and muscles, is also interfaced to the machine’s control system via neuromuscular electrodes. This creates an intimate union between the body and the machine; between biology and mechatronics.”

In addition to the neuromuscular control systems, the team has also included neural stimulation that passes in the other direction, providing sensory feedback to the patient. This type of feedback is critical for a person to interact with their surroundings in ways that approach normal performance.

“Reliable communication between the prosthesis and the body has been the missing link for the clinical implementation of neural control and sensory feedback, and this is now in place,” said Max Ortiz Catalan, a research scientist at Chalmers University of Technology and leading author of the publication, in the press release. “So far we have shown that the patient has a long-term stable ability to perceive touch in different locations in the missing hand.”

Results of the year-long study were recently published by the team in Science Translational Medicine. The researchers plan to treat more patients with the technology later this year, according to the press release.

Brain machine interface research is on the rise, leading to many approaches to controlling prosthetics. Recently, in an article published on Med Device Online, movement was generated in paralyzed limbs using an interface with the brain.