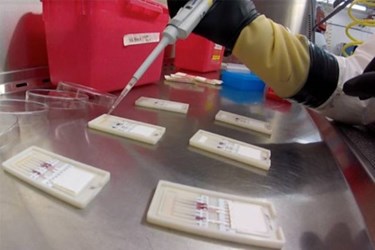 Designed to act like a litmus paper test strip, a new Ebola diagnostic is being developed at the Massachusetts Institute of Technology (MIT). The new, simple device could increase the speed of Ebola diagnosis, allowing the disease progression to be tracked in real-time.

The recent West African Ebola outbreak has become a worldwide focus, and the spread of the disease has tested global public health measures. Centered in Sierra Leone, Liberia, and Guinea, it has since slipped through protective barriers and arrived in areas like the United States and Europe. In many ways, the epidemic served as a wake up call to the public health community as very few, if any, measures were available to treat or diagnose the disease, making containment a significant challenge.

Given these events, many diagnostic methods are now under fast-track development. Several of these systems are designed around compact, real-time polymerase chain reaction methods, and some have reached the prototype level — like a system from Positive ID that was discussed in a recent article from Med Device Online.

High-tech instrumentation often fails, however, in the rugged field conditions, as seen in third world countries. To avoid this design weakness, a team at MIT took a different, low-tech approach, according to a recent article from MIT News. Their paper device uses inkjet-printed molecules and nanoparticles that bind specifically to the Ebola virus. After printing the active molecules on the paper, lasers are used to cut fluidic pathways into the paper. If Ebola is present in the blood tested by the device, the virus binds to the specially tuned nanoparticles.

The device was designed to be stored in first aid kits found in villages and clinics so that results could be obtained in less than 30 minutes, according to MIT News. This point of care approach would eliminate the need for people to go to the hospital for testing, where they could potentially infect others while awaiting results. The vision of the MIT research team is for this test method to be linked to a crowd-sourced, real-time surveillance platform that allows the spread of the disease to be predicted.

“Our goal is for every first aid kit, every clinic, and every home in a village to have a cheap, rapid test where they can self-report results within 30 minutes,” Lee Gehrke, the Hermann von Helmholtz Professor at MIT’s Institute for Medical Engineering and Science, told MIT News. “It’s giving all these great platforms for mobile health a verifiable ground-truth mechanism, just like a meteorologist relies on small weather stations across Massachusetts to make forecasts about tomorrow’s chance of snow.”

Another rapid and low-tech diagnostic that could possibly mesh with the described real-time surveillance program has been under development by the French government, according to a recent article on Med Device Online. This device is analogous to a pregnancy test, and it uses monoclonal antibody technology to react with the virus in as little as 15 minutes using only one or two drops of blood.