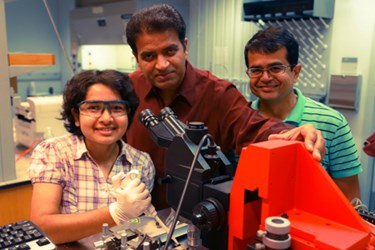 The advantages of graphene-based biomaterials are numerous and range from strain measurement to potential as a drug delivery vehicle. In the area of biosensing, however, a team at UC Santa Barbara has found a cheaper alternative to graphene that is orders of magnitude more sensitive.

In some ways graphene has taken the medical device field by storm, demonstrating its value in a variety of applications. Its two-dimensional structure is conductive, which is a property that lends itself to strain measurements and the detection of molecules in certain biosensor designs. Graphene has even been used as a substrate to assemble model cell membranes and has been used in the sequencing of DNA as well. When it comes to biosensing, however, graphene has certain limitations.

Field effect transistor (FET) devices regulate current flow using a gate, which may sound familiar, as this similar mechanism is used in digital electronics. In the case of biosensing, the gate is replaced by the molecule that is being sensed. When the molecule conjugates, or attaches to the surface of the sensor, it changes the current flow in the sensor, allowing the molecule to be detected.

Graphenes have been used for FETs with some success, though they inherently suffer from a key limitation: they have no band gap, which results in the leakage of current and lost sensitivity. This limitation prompted UC Santa Barbara (UCSB) researchers to look at another molecule called molybdenum sulfide (MoS2).

“Monolayer or few-layer MoS2 have a key advantage over graphene for designing an FET biosensor: They have a relatively large and uniform band gap (1.2-1.8 eV, depending on the number of layers) that significantly reduces the leakage current and increases the abruptness of the turn-on behavior of the FETs, thereby increasing the sensitivity of the biosensor,” said UCSB professor of electrical and computer engineering Kaustav Banerjee in a recent press release.

A research study performed by Banerjee and his team was recently published in the journal ACS Nano. To demonstrate the superiority of this material, the team tested a protein sensor fabricated with MoS2 that was capable of detecting proteins in the 100 femtomolar concentration range. This detection demonstrated a sensitivity of 196, a value that was 74 times greater than graphene in similar circumstances. The technology was shown to be even more sensitive when applied to pH, where it achieved a sensitivity value of 713.

If that weren’t enough, the material is easier to manufacture than carbon-based materials.

“In fact, atomically thin MoS2 provides the best of everything,” Banerjee said in the press release, “great electrostatics due to their ultra-thin body, scalability (due to large band gap), as well as patternability due to their planar nature that is essential for high-volume manufacturing.”

The field of biosensing is a wide-ranging one that is rapidly growing. Apple has developed initiatives to predict heart attacks using biosensing. In addition, a number of different biological markers have been studied using biosensing technologies including DNA.