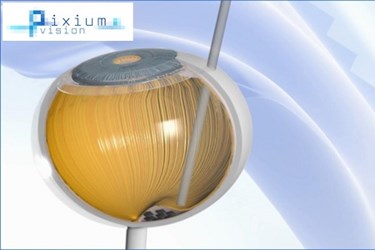 A new visual prosthesis translates video images into infrared light that is projected onto a chip implanted behind the retina. Scientists believe that after further development of the technology, the device could provide users with 20/120 vision, which is below the limit of legal blindness.

Certain retinal diseases kill or damage the eye’s photoreceptors, which are responsible for translating light into electric impulses. Scientists at Stanford University have designed a 100-mm chip that can take the place of these photoreceptors in the chain of activity that communicates images up the optic nerve and into the brain, according to an article in IEEE Spectrum.

The design incorporates a camera into specially designed goggles that processes images recorded into an infrared image that is then beamed into the eye. The research team, who presented their preliminary results at the IEEE Neural Engineering Meeting in Montpellier, France, chose infrared light because ambient light was not strong enough to both communicate the images and power the chip.

Scientists designed the chip to be photovoltaic — it produces an electric current at the junction of two different substances exposed to light. Because the unit is self-powered, users will not need to manage cumbersome wires, batteries, or recharging devices.

According to a study published in Vision Research, “Systems currently approved for human use offer poor spatial resolution (typically below 20/1200) and include an extra-ocular power supply wired to the retinal implant, which require very complex surgery with considerable risk of adverse events.”

Legal blindness in the U.S. is currently set at 20/200. With further work on the infrared based technology, Henri Lorach, lead author of the Stanford study, believes that the next generation of his team’s device could offer a patient 20/120 vision, below the legal limit.

Pixium Vision, a French technology company, will handle commercialization of the new device, and clinical trials are expected to start in early 2016.

In April, MedDevice Online reported that bionic eye pioneer Second Sight reached a pivotal milestone in the development of its next-generation technology, the Orion I Visual Cortical Prosthesis, when the device was implanted into an animal model during preclinical testing. This device is an update of Argus II Retinal Prosthesis, which was approved by the FDA in 2013.

Functional prototypes of Orion I should be available later this year for further clinical testing on active animals in 2016 and humans in 2017.

The CDC estimates that 3.4 million Americans over the age of 40 are legally blind, and another 21 million report significant vision trouble.