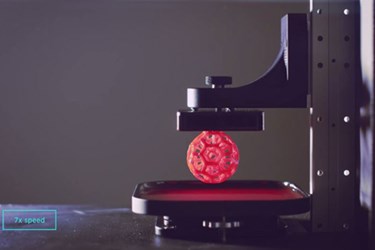 Researchers have developed a 3D printing technology that uses UV light to “grow” objects out of liquid. The scientists report that the method is much faster than current 3D printers, can employ a variety of materials, and is capable of generating previously impossible geometries. Personalized, on-demand medical devices is one of the target applications for the technology.

Traditional 3D printing methods build objects layer by layer, a process that can take hours to complete. Researchers from the startup Carbon3D and the University of North Carolina (UNC) in Chapel Hill have devised a new process called continuous liquid interface production (CLIP), which they report is 25 to 100 times faster than current methods.

CLIP works by shining UV light through an oxygen-permeable window into a pool of liquid resin. By manipulating the light and oxygen, the scientists are able to control the solidification of the liquid, and the newly formed object is lifted of the liquid by a slowly rising platform, at a rate of hundreds of millimeters per hour. CLIP is compatible with a range of materials such as elastomers, silicones, nylon-like materials, ceramics, and biodegradables.

A study explaining the technology was recently published in Science, in which the co-creators “demonstrate the continuous generation of monolithic polymeric parts up to tens of centimeters in size with feature resolution below 100 micrometers.”

Carbon3D is led by UNC-Chapel Hill professors Joseph DeSimone, Alex Ermoshkin, and Edward Samulski. DeSimone, currently on sabbatical from UNC, revealed the technology during a TED talk in Vancouver this week.

According to DeSimone, the process rethinks the chemistry and physics behind 3D printing entirely, allowing for novel applications, especially in the medical industry.

“Since CLIP can allow us to make stronger objects with unique geometries that other technologies cannot achieve …. and facilitates 3D polymeric object fabrication in a matter of minutes instead of hours or days, it would not be impossible within the coming years to enable personalized coronary stents, dental implants, or prosthetics to be 3D printed on-demand in a medical setting,” said DeSimone in the press release.

Popular Science  reports that Carbon3D is currently seeking a patent for their CLIP printer and that a commercial version might be available by the end of this year.