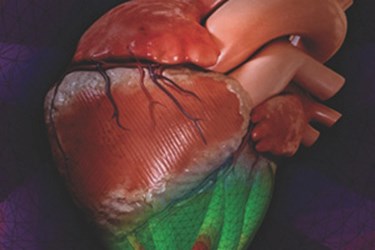 Scientists at Harvard’s Wyss Institute for Biologically Inspired Engineering and Harvard’s School of Engineering and Applied Sciences (SEAS) have created a new material capable of replicating the complex, 3D motions of the human heart.

“Rather than a simple pumping action, [hearts] circulate blood as if they were wringing a towel,” an article published on the Wyss Institute’s website explained. “The bottom of the heart twists as it contracts in a counterclockwise direction while the top twists clockwise. Scientists call this the left ventricular twist — and it can be used as an indicator of heart health.”

This twisting motion of the heart has traditionally been difficult to replicate in models and other types of medical robotic systems.

“Most models of the heart used today do not mimic its 3D motion,” said Ellen Roche, an M.D./Ph.D. candidate at SEAS. “They only take flow into account.”

In order to more accurately model the full range of motion found in a human heart, Roche and the rest of the research team at the Wyss Institute and SEAS developed a specially modified pneumatic artificial muscle (PAM).

The team used a soft silicone elastomer embedded with braided mesh to create a series of PAMs. The researchers then attached an air supply for pressurization and placed the PAMs  within a matrix of the same silicone substance,  creating a single, complex “organ.” By applying pressure to different points of the organ, the matrix of artificial muscles was able to move in multiple directions simultaneously.

In an article published in Advanced Materials, researchers described the results of tests in which the PAM organ was attached to motion trackers while it reacted to various pressures. The results of this early experiment closely matched both computer model predictions and actual clinical data plotting the real-life action of the ventricular twist.

“That was a great moment,” Roche said of the successful experiment. “It means that now we have proof of concept that we can in fact mimic the heart’s natural 3D motion.”

By deactivating certain muscles within the PAM organ, scientists can also replicate the movements of hearts that have been damaged by injuries or disease, such as a heart attack. Researchers hope this will provide a more accurate way for doctors and surgeons to study the heart and devise more effective modes of treatment.

“The motion of most mechanically active cardiac devices is currently tested in 2D,” said Don Ingber, founding director of the Wyss Institute. “This new breakthrough provides a much better test-bed for these types of devices — and it could inspire a whole new class of cardiac therapies, such as improved ventricular assist devices that mimic natural heart motion.”

The research team hopes to develop biocompatible versions of the new PAM matrix that could eventually pave the way toward creating a new kind of implantable cardiac device, according to the Wyss Institute.