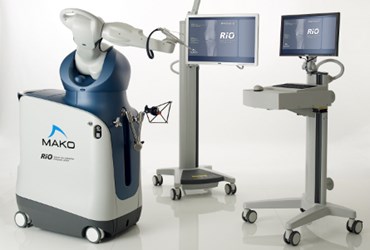 Emerging competitors are gearing up to challenge the dominance of Intuitive Surgical's Da Vinci Surgical System and other established players in the field of robotic-assisted surgery by offering mobility, affordability, and technological advantages.

Research Triangle Park, N.C.-based TransEnterix came one step closer to obtaining U.S. Food and Drug Administration (FDA) clearance for its SurgiBot System after submitting a response to its pending 510(k) application. SurgiBot is a single-port, mobile, and robotically enhanced laparoscopic surgical platform, which — unlike the da Vinci system, which requires surgeons to sit behind a fixed console away from the patient — lets the surgeon operate in the sterile field.

The company also is preparing to commercialize its ALF-X multi-port robotic system with platform-exclusive features, such as haptic feedback and eye-tracking camera control. TransEnterix announced that it has raised $18 million under its $25 million “at-the-market” (ATM) equity sales facility to support investments for the commercialization of ALF-X in Europe, as well as the SurgiBot in the United States, following anticipated FDA clearance sometime during the first quarter of 2016.

Another device maker, Toronto-based Titan Medical, unveiled recently its SPORT (Single Port Orifice Robotic Technology) surgical robot, which is similar to the da Vinci system with its 3D visualization and intuitive finger controls, MedGadget reports. However, Titan looks to compete by offering its robot at a much more affordable price. The company plans to obtain FDA clearance by the end of 2016, and to launch the SPORT product in the United States in 2017.

According to the Financial Times, new players who offer more affordable robots with new technological features could change the dynamics in the market, which is led by Intuitive Surgical, whose da Vinci system dominates the laparoscopic surgery market; Hansen Medical, which makes robotically controlled transvenous catheters; and Mako Surgical, which makes robots used for orthopedic procedures, such as knee resurfacing and hip replacements. Mako was acquired by Stryker Corporation in 2013.

While new entrants could entice cost-conscious hospital clients and become disruptive to some extent, Intuitive Surgical CEO Gary Guthart believes emerging competitors lack the whole ecosystem that da Vinci offers. In a recent call with analysts, he explained, "It's easy to think just about the robotic system because that's the most visible part, but there are the systems, the instruments and accessories, advanced instrumentation like stapling, imaging systems, fluorescence imaging, training technologies like stimulators and dual console, clinical validation training courses offered by academic surgeons that number in the dozens. That whole set of products and ecosystem, we think, is important."

As for pricing, Intuitive intends to remain competitive by offering clients different price points for both the system and instrumentation sides, Guthart added in the call.

Intuitive reported that, for 2015 worldwide, it shipped 492 da Vinci surgical systems, and total da Vinci procedures increased 14 percent to 652,000 procedures performed. For 2016, Guthart said the company "will focus on the expanded use of da Vinci in general and thoracic surgery, particularly colorectal surgery and hernia repair," and will invest in advanced imaging, advanced instrumentation, next generation robotics, analytics, and market development.

Besides having to contend with market leader Intuitive, new and smaller competitors have to worry about other industry bigwigs looking to get a bigger slice of the promising surgical robotics market, which could be worth $20 billion by 2021.