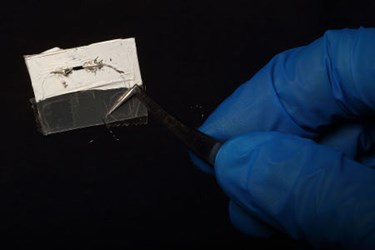 Researchers from Rice University, Sandia National Laboratories, and the Tokyo Institute of Technology have used carbon nanotube structures to create a new terahertz detector that could significantly improve medical imaging.

“Perhaps the most exciting application offered by terahertz technology is as a possible replacement for magnetic resonance imaging (MRI) technology in screening for cancer and other diseases,” Junichiro Kono, a physicist at Rice who is involved with the project, said in a press release. “The potential improvements in size, ease, cost, and mobility of a terahertz-based detector are phenomenal. With this technology, you could conceivably design a handheld terahertz detection camera that images tumors in real time with pinpoint accuracy. And it could be done without the intimidating nature of MRI technology.”

Terahertz waves can easily pass through a variety of materials. The challenge, said Kono, has been finding the right material to effectively absorb these waves and turn them into useful electronic signals.

Carbon nanotubes have so far proven to be one of the most efficient materials for accomplishing this, but attempts to develop a practical way of turning terahertz-absorbing nanotubes into a usable device have so far been unsuccessful. This has largely been because terahertz waves typically require an antenna to achieve coupling into a single nanotube, according to the press release.

To overcome this challenge, researchers involved with the project devised a way to wrap together a number of carbon nanotubes and combine them with other metallic and semiconducting nanotubes — in order to create a thin and flexible terahertz-detecting film. The film, researcher say, is highly sensitive to polarization, features a large detection area, operates at room temperature without requiring power, and has proven effective at capturing terahertz waves.

“The structure is very compact and combines the absorber, the thermometer, and the polarizer that terahertz detectors require into one piece of film,” said Xiaowei He, a Rice graduate student involved with the project.

Details regarding the new nanotube film and its performance in early tests were published in the journal Nano Letters.

Before the nanotube film can be used in marketable applications, researchers say they will need to make some key improvements to its overall design and functionality. In particular, Sandia scientist François Léonard said that they will need to figure out a way to combine the film with an independent terahertz radiation generator so it can be used in places where there isn’t already a source of terahertz waves. Similarly, the team of researchers will need to find a way to incorporate electronics into the system, and to further improve the general properties of the nanotube film.