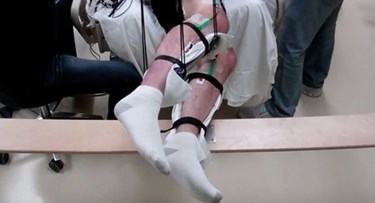 A new study has found that a combination of non-invasive spinal cord stimulation (SCS), drugs, and conditioning can reinstate simple movements in individuals with complete motor paralysis. If further developed, this therapy could provide a non-invasive treatment option for paralyzed patients — especially those cases unsuitable for surgery — according to the scientists who conducted the study.

Transcutaneous electrical nerve stimulation (TENS) works by placing electrodes in strategic locations on the patient’s skin and delivering electric impulses externally to stimulate nerve pathways.  Currently, it is a common treatment option for patients with chronic pain and is often used in conjunction with physical therapy.

According to the study conducted by a team of scientists based at the University of California, Los Angeles (UCLA) and published in the Journal of Neurotrauma, TENS treatment might be an effective treatment option for paralyzed patients hoping to restore their mobility.  The team is led by UCLA scientist Reggie Edgerton, who succeeded last year in stimulating movement in four different patients using implanted devices.

Last year, Edgerton remarked in a press release that providing stimulation to the spinal cord allowed a paralyzed body to remember its former connections, and to re-establish communication with the brain.

“This is a wake-up call for how we see motor complete spinal cord injury. We don’t have to necessarily rely on regrowth of nerves in order to regain function. The fact that we observed this in all four patients suggests that this is actually a common phenomenon in patients with complete paralysis,” said Edgerton.

In a recent press release, Roderic Pettigrew, director of the National Institute of Biomedical Imaging and Bioengineering at the National Institute of Health (NIH),  said that Edgerton’s team provided significant evidence that a spinal cord injury “may not mean a life-long sentence of paralysis” and remarked that a non-invasive option would be a significant advance in technology.

“There are a lot of individuals with spinal cord injury that have already gone through many surgeries and some of them might not be up to or capable of going through another,” said Edgerton

Edgerton’s most recent study, which collaborated with University of California, San Francisco and the Pavlov Institute in Russia, studied five men who were suspended using braces for 45 minutes per week for 18 weeks.

During their sessions, the men received TENS therapy as well as manual conditioning. For the final weeks of the study, the men were also given buspirone, a drug that has been found to induce movement in mice with spinal cord injuries. By the end of their sessions, researchers found that the men were able to move their legs on their own with no stimulation.

Similar to the investigations with the implanted device, Edgerton commented that it was as if their bodies had “reawakened” and reopened their communication channels.

Edgerton believes that further study and development will show that the non-invasive option will be just as effective as his surgical implant, but commented that both merited extensive study.

“All patients are going to need something slightly different, and maybe non-invasive stimulation is going to be best in some cases and epidural stimulation in others,” said Edgerton. “What we need to do is maximize the clinical tool box we have so that the physician and patient can select a therapy that is best for them.”

The research was funded, in part, by the NIH.