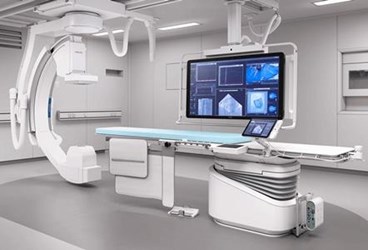 Philips has unveiled Azurion, the company's next-generation image-guided therapy platform, capable of performing a wide range of routine, as well as minimally-invasive, catheter-based procedures in the interventional lab or hybrid operating room (OR).

Azurion also features procedure cards that allow clinicians to pre-program routine tasks and user preferences, speeding up procedure times and reducing errors. A tablet with customizable interfaces can be used at tableside to control the system, which features over 1,000 new components working together to deliver high image quality at ultra-low X-ray dose. Further, Azurion's C-arm is designed to pan and rotate without the need to use fluoroscopy.

“Hundreds of Philips developers, engineers and designers and dozens of our clinical partners across the world have collaborated to completely redesign the heart of our portfolio. With the launch of our new Azurion platform, which was designed to optimize system integration and lab performance, we can deliver new turnkey solutions that support our customers in maintaining high standards of quality and patient care at predictable costs,” said Bert van Meurs, Business Leader of Image Guided Therapy at Philips, in a news release.

Azurion will be available in both single-plane and biplane configurations. The single-plane configuration is available now, while the biplane version ships later this year, according to Aunt Minnie. The system is manufactured in the Netherlands and is already being used in 20 clinical sites around the world. It is market-cleared in most global markets, including Europe and the United States.

Philips says Azurion, which took five years and "tens of millions" of euros to develop, will serve as the backbone of the company's guided imaging therapy business in the future, reports Reuters.

The acquisition of Volcano Corp. in 2015 has made Philips a leader in advanced catheters in the €5-billion image-guided diagnosis and therapy global market, the company said. Philips CEO Francois van Houten adds that synergies from the successful integration of Volcano contributed to double-digit sales growth in the company’s Image-Guided Therapy business overall for the last two quarters of 2016.

"We are continuing to deepen our market penetration in Image Guided Therapy solutions, where we saw a strong growth peripheral imaging and therapy catheters in the United States and we are expanding in new geographical markets such as Asia Pacific," he told analysts during an earnings call.