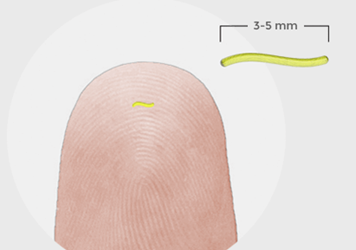 The Defense Advanced Research Projects Agency (DARPA) has invested $7.5 million dollars in Profusa’s system of tissue-integrated, long-term biosensor technology that transmits a stream of metabolic chemistry data for up to two years.  The technology is part of a paradigm shift from point-in-time blood test panels to continuous monitoring, said Profusa CEO Ben Hwang.

The biosensor is approximately three to five millimeters long and 500 microns in diameter, and is injected into the tissue just below the skin. Its porous “smart gel” is structurally similar to the microenvironment of cells and emits fluorescent signals in the presence of multiple body chemicals, such as glucose, oxygen, ions, lactate, urea, and other biomarkers.

Key to its differentiation from similar technology, the implant was designed to overcome “the foreign body response,” because it does not use any metal or electronics. While avoiding tissue inflammation and rejection, the device can remain in place and collect data for over two years, according to Profusa’s website.

An earlier generation device using Profusa’s technology, called the Lumee Oxygen Sensing System, was designed to detect the oxygen levels in tissue, compared to existing devices that check for oxygen levels in blood. This localized monitoring addresses a previously unmet need in the treatment of peripheral artery disease (PAD) and currently is pending a CE Mark to enter the European market in late 2016.

Since its founding in 2009, Profusa has been the recipient of multiple awards, grants, and investments both public and private, including a recent Edison Silver Award in the wearable and sensors category in April. Profusa also received a $1.75 million grant from the National Institutes of Health (NIH) for further clinical trials with Lumee technology and PAD patients. The $7.5 million grant from DARPA supports further development of the technology as a way to monitor the health signs of soldiers in the field for greater mission efficiency.

Natalie Wisniewski, co-founder and chief technology officer at Profusa, commented that the technology is both long-lasting and capable of “monitoring a soldier’s metabolic and dehydration status, ion panels, blood gasses and other key physiological biomarkers.”

During a presentation at Pioneers Festival in Vienna earlier this year, Hwang explained that Profusa’s technology platform meets “three key criteria” for continuous monitoring: clinical-grade data and an easy-to-use interface at a reasonable cost.  In Hwang’s vision, the technology will one day be used in place of metabolic panels, which are routinely collected from patients, but only capable of capturing point-in-time data.

“We believe our technology can impact the entire spectrum of stakeholders in the healthcare system to fundamentally alter the way they do things,” said Hwang.

Last year, Swiss scientists unveiled implantable technology capable of continual blood analysis beneath the skin. Their device measures at one square centimeter, is integrated with Bluetooth technology, and is capable of measuring body chemistries such as glucose, cholesterol, and levels of prescription drugs.