4 Reasons Why 3D Printing Will Revolutionize The Medical Device Industry 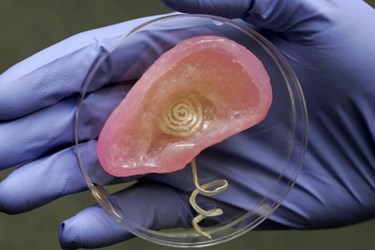 It seems like not a week goes by without news of some new medical miracle accomplished through the wonders of 3D printing. Well established in the manufacture of hearing aids and dental implants — and nearly ubiquitous as a prototyping tool — 3D printing is now enabling the fabrication of things like myoelectric prosthetics, bioresorbable implants, and even human organs. And the pace of adoption is accelerating. Research published by Transparency Market Research projects that the global market for 3D printing in the medical space, estimated at $355 million in 2012, will grow to nearly $1 billion by 2019.

3D printing, also known as additive manufacturing, is poised to completely transform the medical device industry as we know it. Why? Here are four big reasons, with recent examples showing that the 3D printing revolution is already well underway:

1. It’s cheap.
In today’s healthcare environment, medical device makers are under immense pressure to drive down the cost of their designs — if they hope to realize any return on their massive product development investments. The combined influence of the medical device excise tax, value-based reimbursement models, growing opportunities in price-sensitive emerging markets, prolonged and expensive regulatory processes, and other economic forces is compelling manufacturers to be exceedingly shrewd and resourceful when it comes to lowering product development and manufacturing costs.

Entrepreneurial individuals are proving that 3D printing can offer some relief on this front. Take, for instance, the field of robotic prosthetics. Myoelectric hands, which use electrical signals from a patient’s voluntarily contracted muscles to open or close mechanical fingers, currently cost anywhere from $10,000 to $100,000 (and typically aren’t covered by national health services or health insurance policies). The high price tag is necessitated by the expensive materials (including titanium) of which they're made and the precise customization required to tailor each device to a particular patient (more on that in a moment).

Inventor Joel Gibbard has created a working prototype of the Dextrus hand, a new myoelectric hand design that he says offers comparable functionality to leading myoelectric hands but at a fraction of the cost. By 3D printing the plastic (ABS) components and using a standard connector to make the hand compatible with existing prosthesis mounts, Gibbard was able to fabricate the Dextrus for less than $1,000. Last week, he launched a crowdfunding campaign to support his Open Hand Project, whose goal is to develop the Dextrus technology to make robotic prosthetic hands more accessible to amputees. For more on the technology, check out the video below.

If you’re unimpressed by a $1,000 robotic hand, how does $500 grab you? South African carpenter Richard Van As started developing the 3D-printed Robohand after losing four fingers to a circular saw in 2011. Though decidedly lower tech than a myoelectric hand (it works by rotation of a joint rather than electric signals), the Robohand has nonetheless restored basic manual function to 170 accident victims, amputees, and children who were born without fingers or hands — many of whom could not have afforded more expensive options. The fact that it can be produced for only $500 using a 3D printer and open source plans downloaded from the Internet means it could reach a whole new market of patients, for instance those in developing nations, who can’t afford a $10,000+ model.

2. It’s customizable.
Medicine is definitely not a one-size-fits-all proposition, yet that’s how it is often approached. Generally speaking, device makers strive to develop products that are applicable to the broadest possible range of patients and conditions, and for good reason. While this approach works well in many cases, few would dispute that it falls far short of the mark in others, where personalizing a devices to the patient’s specific needs would be ideal.

When combined with imaging technology, 3D printing can enable the creation of medical implants and other devices that are tailor-made for a patient’s unique anatomy. Earlier this year, the British reality TV show Embarrassing Bodies chronicled the story of Eric Moger, who lost his left eye, cheek, and jawbone and much of his skull during surgery to remove a tennis-ball-sized squamous cell carcinoma from his face. Dental surgeon Andrew Dawood used CT and digital scans of the undamaged, right side of Moger’s face and used them to 3D print a nylon model for the left side. Based on this mold, Dawood created a silicone facial prosthesis that, combined with a titanium jaw and plastic mouth plate, enabled Moger to eat and drink without a tube for the first time since the surgery, and return to a normal life.

In Hong Kong, clinical trials are currently underway to evaluate custom finger-joint implants based on 3D-printed models. The process to make these implants is similar to the one Dawood used for his facial implant: First, scans of the patient’s hand are taken, and the images are then 3D printed into plastic models. After conceptual evaluation and motion testing, the models are used to create metal alloy implants. The goal is to provide citizens with implants that are sized more appropriately than ill-fitting versions currently imported to Hong Kong from the U.S. and Europe.

3. It’s fast.
Another recent example of a custom 3D-printed implant illustrates an additional feature of the technology that will help it accelerate change in medicine — its ability to quickly deliver the necessary treatment to the patient. Such was the case with Kaiba Gionfriddo, an infant who was born with a severe case of tracheobronchomalacia, a weakness in the airways that causes his trachea and left bronchus to collapse on a nearly daily basis, cutting off airflow to lungs. Kaiba needed a custom solution immediately.

At the time, Glen Green and Scott Hollister of the University of Michigan were developing a bioresorbable tracheal splint that they thought could help Kaiba. After receiving emergency clearance from the FDA, the researchers used 3D printing to produce a custom polycaprolactone splint based on CT scans of Kaiba’s trachea and bronchus. The splint was surgically attached to Kaiba’s airway, expanding his bronchus and providing it with the stability needed to grow properly. The biopolymer split will dissolve over three years and be reabsorbed by the body.

3D printing provides the perfect vehicle for rapidly manufacturing customized medical devices on demand, and not just in emergency situations like Kaiba’s. Consider hearing aids, the majority of which are manufactured using 3D printing. A decade ago, it would take over a week to construct a custom hearing aid for a patient; with 3D printing, that process has been reduced to less than a day.

4. It’s conducive to innovation.
Not only is 3D printing improving upon conventional medical designs — and making life-saving and -improving devices available to a wider range patients — it’s also helping to make the unimaginable possible, enabling innovations that traditional manufacturing approaches can’t touch. In no area is this trend more pronounced than regenerative medicine, where research is steadily progressing toward the eventual bioprinting of complete organs, even bionic organs. Here’s a sampling of breakthroughs announced during the last several months alone:

The rapid pace of innovation in 3D printed medical devices has caught the attention of the FDA. In a recent blog post, Steven K. Pollack and James Coburn of the agency’s Office of Science and Engineering Laboratories (OSEL) acknowledged that “3D printing is fast becoming a focus in our practice of regulatory science” and indicated that two OSEL labs — the Functional Performance and Device Use Laboratory and the Laboratory for Solid Mechanics — are hard at work determining how the FDA should evaluate medical devices made using the technology.

Putting the appropriate regulatory framework in place is one of many hurdles 3D printing will have to clear on its way to more widespread use in medicine. However, the persistent improvement of 3D printing technologies and techniques, and a continued drop in equipment and material prices, will only hasten its adoption. Make no mistake about it: 3D printing will radically change the medical device industry, and in many ways, it already has.

What are your opinions about 3D printing’s likely impact on the medical device space? Will it live up to the hype? Why or why not? Please share your comments below.