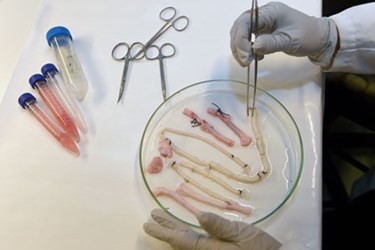 Researchers from Sahlgrenska Academy have demonstrated the ability to grow a new blood vessel in only a week. What is even more impressive is that the technique only required the use of two tablespoons of blood, rather than stem cells extracted from bone marrow.

Vascular disease affects tens of millions of patients in the United States and Europe alone, and the number of patients may go up as the population ages. Currently, treatment of this disease is usually done by surgical replacement of the vessel using autologous vessels, synthetic grafts made from Gore-Tex or Dacron, and sometimes allogenic grafts from donors. Each of these procedures has limitations and can lead to complications over time as vessels occlude or become calcified.

A certain group of patients caught the eyes of Sahlgrenska researchers as ideal candidates for a new approach, according to recent press release from the academy. Some pediatric patients are born with a congenital absence of the vein between the liver and the gastrointestinal tract, and this was the issue the team set out to address. Finding the correct phenotype, or anatomical geometry, is tricky for these patients, so the researchers were motivated to find an alternative to traditional approaches.

Using a decellularized allograft, they were able to infuse it with autologous blood that naturally contains stem cells. The technique only requires about two tablespoons to be effective, according to the press release. The procedure has been tried on two patients so far, and a third is being prepared. The first patient used a bone marrow sample to provide stem cells. Given that sampling bone marrow is painful, blood was used later, and the results were better than expected.

"The blood itself accelerated growth of the new vein," Suchitra Sumitran-Holgersson, professor of Transplantation Biology at Sahlgrenska Academy, said in the press release. “The entire process took only a week, as opposed to a month in the first case. The blood contains substances that naturally promote growth."

This proof of concept clinical study allowed the patients to undergo successful portal vein bypass surgery without the need for immunosuppressants, according to a study published by the team in EBioMedicine. The technique may make it possible to treat other forms of venous insufficiency, using only a blood sample and taking a relatively short period of time.

"We believe that this technological progress can lead to dissemination of the method for the benefit of additional groups of patients, such as those with varicose veins or myocardial infarction, who need new blood vessels," Holgersson said in the press release. “Our dream is to be able to grow complete organs as a way of overcoming the current shortage from donors.”

Using decellularized vessels to act as scaffolds for cell growth is one approach to tissue engineering vascular tissues. Another is through 3D printing using synthetic scaffolds.