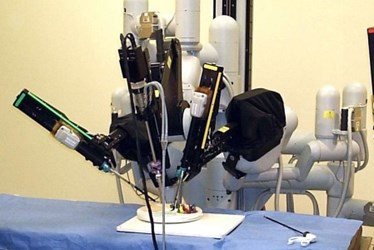 Advantages of robotic surgery have been accumulating as the technology becomes more advanced. Improved imaging may provide the surgeon with better visualization in the operating theater, while greater articulation by the robot may allow increased ergonomics. In some cases, it may be possible to perform surgery remotely, with the surgeon far from the operating suite.

The benefits have started to accrue, particularly in situations where minimally invasive surgical (MIS) procedures, like prostate surgery, were not available. The use of robotics, along with MIS approaches, tremendously reduces the traumatic impact of the full open prostate surgery, which was a clear win for patient morbidity. For some benign gynecologic conditions, however, robotic technology has proven to have drawbacks, according to a recent press release.

In a study conducted from 2009 to 2012 involving nearly 90,000 cases, Columbia researchers discovered some interesting trends. For robotically assisted oophorectomy, the removal of ovaries, intra-operative complications rose to 3.4 percent from 2.1 percent when compared to traditional laparoscopic methods. Similarly, robotically assisted cystectomy, the removal of an ovarian cyst, demonstrated a 3.7 percent complication rate versus conventional laparoscopic methods, which had a 2.7 percent complication rate. Both of these comparisons were shown to be statistically significant, according to the study, which was published by the team in Obstetrics and Gynecology.

In addition to having greater complication rates, comparisons of costs showed that both procedures involving the robotic systems were much more expensive. Median costs for robotic oophorectomy were $7,426, while traditional laparoscopy costs were $4,922 — a nearly 51 percent increase. Similarly for robotically assisted cystectomies, the cost was $7,444, while the cost for laparoscopic procedures was $4,133, marking about an 80 percent increase.

“With the rapid rise in the cost of cancer care, we need to make sure that public policies encourage comparative studies prior to widespread dissemination of new technologies,” said study co-author, Dawn L. Hershman, M.D., M.S., associate professor of medicine at the College of Physicians and Surgeons, associate professor of epidemiology at Columbia’s Mailman School of Public Health, and leader of the Breast Cancer Program at the Herbert Irving Comprehensive Cancer Center at NewYork-Presbyterian/Columbia, in the press release.

Robotic surgery continues to advance as the technology enjoys extensive research efforts. Contrary to these results, robotics was recently shown in two separate studies to provide benefits in the arena of lung surgery.