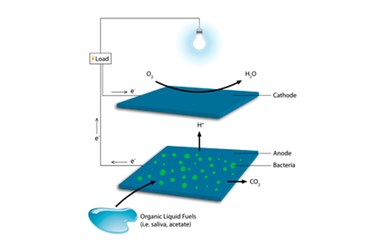 A team of researchers from Penn State University and King Abdullah University of Science and Technology (KAUST) in Saudi Arabia has developed a tiny power generator that runs on human saliva. Researchers hope that the generator could help fuel small, personal, and mobile medical devices.

The new generators harness the tiny amounts of electrical power generated when certain bacteria break down the array of organic matter naturally present in human saliva.

According an article recently published in the journal Asia Materials, “By producing nearly 1 microwatt in power, this saliva-powered, micro-sized MFC (microbial fuel cell) already generates enough power to be directly used as an energy harvester in microelectronic applications.”

The article outlines the construction of the tiny power generators, which were designed as single chamber fuel cells that use a graphene-coated carbon cloth anode as well as an air cathode.

This design is a marked departure from other small-sized power generators, which typically feature two chambers and a platinum-coated carbon cloth anode.

Additionally, the team is the first to include an air cathode. In previous designs, the presence of air nullified the bacteria’s ability to produce electricity.

“We have previously avoided using air cathodes in these systems to avoid oxygen contamination with closely spaced electrodes,” Bruce E. Logan, Evan Pugh Professor and Kappe Professor of environmental engineering at Penn State, explained in a news release published by Penn State. “However, these micro cells operate at micron distances between the electrodes. We don’t fully understand why, but bottom line, they worked.”

According to Penn State’s news release, one possible application includes using the device as a tiny ovulation predictor that would use a woman’s saliva to both gather important medical data and power the electronic transmission of that same data. More specifically, the device would analyze the conductivity of a woman’s saliva, which changes five days before ovulation. It would then use power from the generator to send the data to a feedback device, like a cell phone.

Researchers involved with this project hope that the new generators could represent an important advancement in portable medical device development, since their energy source would be available anywhere. Before the generators would work, however, they would need to be inoculated with the power-producing bacteria, since human saliva does not carry the type of bacteria used in the generators.