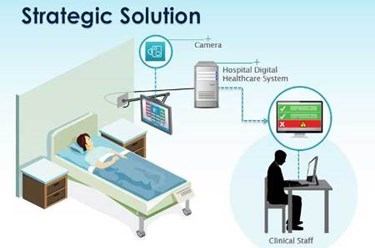 Oxehealth, a spin-out of Oxford University, successfully piloted a contact-free video monitoring system last year that can track five different patient vital signs using camera images and computer algorithms. The British startup has now partnered with Hanwha Techwin (formerly Samsung Techwin) to bring the system to market, where it is expected to improve patient monitoring in both hospitals and at-home care environments while alleviating pressure on healthcare staff.

“One of the most important, yet time-consuming activities performed by nurses is the recording of vital signs,” said Catherine Stoddart, chief nurse at Oxford University Hospitals, who added that routine monitoring of hospital patients typically is a four-hour to six-hour task. In comparison, Oxecam provides “round the clock monitoring of all five essential vital signs, thus allowing sudden and unexpected deterioration to be recognized early and treated quickly” while alleviating pressure on hospital staff, said Stoddart in a press release.

At the conclusion of a successful six-month study at Broadmoor Hospital last June, Oxhealth announced it was looking for partners in the camera industry to further develop the prototype system.

Hanwha Techwin, global manufacturer of Samsung-branded video surveillance solutions, signed a global technology partnership with Oxehealth, under which the two companies will continue to develop the Oxehealth system with Samsung-branded cameras, according to a press release.

Hanwha — a $56 billion Korean corporation focused on energy and technology—became the majority owner of Samsung Techwin in 2014, and the company changed its name to Hanwha Techwin on April 1, 2016. Tom Cook, Samsung’s VP of sales for North America, told Security Systems News that Hanwha is co-owner of the Samsung brand name and can continue to use the name “as long as it pleases.”

Cheol Kyo Kim, CEO of Hanwha Techwin, commented in a press release that the Oxehealth deal addresses “real market needs” with innovative video surveillance solutions, and will “provide users with a solution that offers both peace of mind and increased operational efficiency.

According to Oxehealth CEO Jonathan Chevallier, Hanwha Techwin’s expertise and track record in video surveillance innovation was what attracted the startup to the partnership.

“We are looking forward to working with the Hanwha Techwin team to promote this market-leading camera-based health monitoring solution to secure room environments, as well as, in the future, exploring opportunities for the technology in other market sectors,” said Chevallier.

Earlier this year, Kyoto University announced a partnership with Panasonic, which would use millimeter-wave radar to monitor patient vital signs remotely, and MIT scientists are working on an ingestible “pill” that could keep tabs on a patient’s vitals from inside their body.