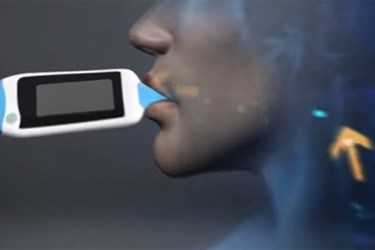 Researchers are developing new technology that would allow a smartphone to screen your breath for signs of life-threatening diseases.

The SniffPhone project, led by Hossam Haick from the Technion-Israel Institute of Technology, uses micro- and nano-sensors to analyze the breath for disease markers, feed the information into a processing system on the smartphone, and interpret the data to reach a diagnosis. This new technology is a smaller and more portable version of the NaNose breathalyzer system that Haick’s team unveiled at the American Society of Clinical Oncology conference last year, according to a Technion press release.

“Our NaNose was able to detect lung cancer with 90 percent accuracy even when the lung nodule was tiny and hard to sample. It was even able to discriminate between subtypes of cancer, which was unexpected,” Nir Peled, professor at Tel Aviv University’s Sackler Faculty of Medicine and collaborator in the study, said in a Tel Aviv University press release.

“Current cancer diagnosis techniques are ineffective and impractical,” Haick told the The Times of Israel, adding that his technology could “facilitate faster therapeutic intervention, replacing expensive and time-consuming clinical follow-up that would eventually lead to the same intervention.”

The NaNose breathalyzer is being co-developed by Technion and Alpha Szenszor, a joint venture announced in 2013.

The European Commission recently awarded the consortium a $6.8 million grant to further their research and development efforts.

According to Haick, the SniffPhone “will be made tinier and cheaper than disease detection solutions currently, consume little power, and most importantly, it will enable immediate and early diagnosis that is both accurate and non-invasive.”

The concept of an “electric nose” has been around for decades, but experts believe that the most recent generation of devices demonstrates that the field has matured, according to an article from CNN.

Investigators in Finland released results of a study that used an electronic device to "sniff" for signs of prostate cancer in urine. Similarly, the University of Leicester introduced a spectrometer that could sniff bacteria in a feces sample.

Gary Beauchamp, director of Monell Chemical Senses, told CNN that odor recognition “could become part of a routine examination in much the same way as blood tests.”