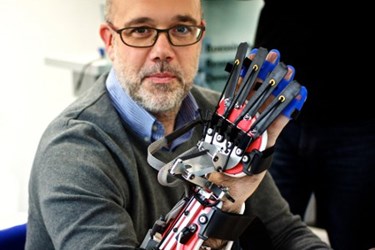 Researchers have developed robotic gloves that they believe will provide assistance to patients recovering from a stroke. The glove addresses impairments to motor skills in the hands and wrists and can be used at home.

Researchers at the University of Hertfordshire (UH), in collaboration with a team of European experts, worked for three years to develop gloves that exercise the hands and wrists. Patients recovering from stroke use the gloves to play an interactive video game. Their performance is recorded and can be communicated to a therapist, who can use the information to tailor the patient’s treatment, reported a UH press release.

According to the researchers, the use of robotics in neurorehabilitation has been well documented, and recent innovations show potential for the therapy to augment traditional physiotherapy.

Their study, published in the journal Robotica, explained, “Part of the appeal for these technologies is the possibility to place a rehabilitative role in one’s home, providing a chance for more frequent and accessible technologies for empowering individuals to be in charge of their therapy.”

The gloves are the result of a $5-million project called Supervised Care and Rehabilitation Involving Personal Tele-robotics (SCRIPT), coordinated by Farshid Amirabdollahian, a lecturer in adaptive systems at UH’s School of Computer Science. The goals of SCRIPT include making therapy more enjoyable and reducing hospital visits.

“This project focused on therapies for stroke patients at home. Our goal was to make motivating therapies available to people to practice at home using this system, hoping that they have a vested interest to practice and will do so,” said Amirabdollahian in the press release.

According to Amirabdollahian, the team’s study of 30 patients reported a high rate of compliance. Patients used the gloves at home for an average of 100 minutes per week. Some of the patients showed clinical improvements in their arm and hand function.

The team is planning an updated prototype that improves results and clinical outcomes. Planned additions include a new orthosis that will allow patients to adjust assistance and resistance provided by the gloves, allowing them to challenge themselves during their home therapy.

SCRIPT is seeking funding for that project and the commercialization of the existing model.