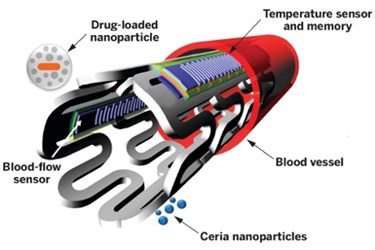 A research team in Korea has developed new innovations for bioresorbable stents by adding a host of biosensors that can track and store data, deliver drugs, and communicate with healthcare providers. This new technology is expected to overcome some of the complications associated with stent technology by addressing potential problems earlier than was previously possible.

Traditional stent technology implants a steel cage-like device into a blocked artery to hold it open and restore normal blood flow. Because this kind of stent remains in the body indefinitely, a number of different complications such as inflammation and blood clotting can occur over time.

Research innovations in the last 10 years have swapped out the steel in favor of materials like magnesium, zinc, or polymers — substances that the body can harmlessly absorb. Another recent development is drug-eluting stents, which are coated with a medication that is slowly released to reduce risk of a recurring blockage.

Now, chemical engineer Dae-Hyeong Kim from Seoul National University wants to incorporate a number of these innovations into one stent and add biosensors that will allow doctors to monitor the stent’s progress and potential problems that may be on the horizon, reported an article in Chemical and Engineering News (C&EN).

The stent designed by Kim’s team is made from magnesium and incorporates an electronic system made out of silicon and magnesium nanomembranes that are extremely flexible and will dissolve with the rest of the stent over time.

Researchers said that the magnesium acts as an antenna that allows the device to wirelessly power itself and broadcast data. The device is also capable of releasing pharmaceutical therapies that activate when needed.

According to an article published by Diagnostic and Interventional Cardiology, many experts say that growing clinical data and continued innovation to the technology will allow bioresorbable stents to replace traditional methods within the next few years.

Abbott, one of the first companies to introduce a bioabsorbable stent, recently reported positive data of a three-year study on its technology and the initiation of a larger international clinical trial.