Shining A Light On Memory 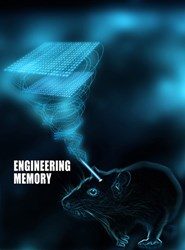 It’s all about strengthened connections between neurons, NIH-funded study confirms

Using a flash of light, scientists have inactivated and then reactivated a memory in genetically engineered rats. The study, supported by the National Institutes of Health, is the first cause-and-effect evidence that strengthened connections between neurons are the stuff of memory.

“Beyond potential applications in disorders of memory deficiency, such as dementia, this improved understanding of how memory works may hold clues to taking control of runaway emotional memories in mental illnesses, such as post-traumatic stress disorder,” said NIMH director Thomas R. Insel, M.D.

The Malinow team proved it by detecting LTP when forming a memory, removing the memory with a process known to reverse LTP, and then bringing the memory back via LTP – all by modifying the strength of synapses in a memory circuit.

To gain the precise control needed to show such a cause-and-effect relationship, Malinow’s team turned to one of neuroscience’s most powerful new tools: optogenetics. It adapts the same cellular machinery that allows primitive organisms like algae to be controlled by light from the sun to control specific brain circuit components instantly with a laser – even in a behaving animal.

In conventional rodent fear conditioning experiments, a tone is paired with a foot shock to induce a fear memory of the tone. If the memory is active, the animal freezes and shows reduced reward-seeking behaviors when it hears the tone. Instead of the tone, Malinow’s team paired the shock with direct optogenetic stimulation, lighting up a specific group of neurons in a known auditory fear memory circuit.

Such precise targeting wasn’t possible with earlier electrical stimulation techniques. “It’s just a jungle in the brain – too many nerve cells coming through in any one place,” explained Malinow.

By varying the pattern of optogenetic stimulation, the researchers were able to strengthen connections between neurons in the circuit by promoting LTP or weaken the connections by promoting a countervailing process called long-term depression (LTD). This made it possible to readily form a fear memory, remove it, and then bring it back.

Moreover, upon closer optogenetic probing in postmortem brains, the targeted circuit neurons showed telltale changes in sensitivity of brain chemical messenger systems. These changes confirmed the hypothesized role of strengthening and weakening of synaptic connections in the switching on-and-off of the memory.

“We have shown that the damaging products that build up in the brains of Alzheimer’s disease patients can weaken synapses in the same way that we weakened synapses to remove a memory,” said Malinow. “So this line of research could suggest ways to intervene in the process.”

“In addition to eliminating any doubt about a link between LTP/LTD with memories, this work highlights the staggering potential of precision targeting and circuit manipulation for alleviating maladaptive memories,” said project officer Chiiko Asanuma,Ph.D., of the NIMH Division of Neuroscience and Basic Behavioral Science.

"This work provides a nice demonstration of how the field of neuroscience is being transformed by the types of technologies that are at the heart of President Obama's BRAIN Initiative,” said Edmund Talley, Ph.D., program director at NINDS.

About the National Institute of Mental Health (NIMH): The mission of the NIMH is to transform the understanding and treatment of mental illnesses through basic and clinical research, paving the way for prevention, recovery and cure. For more information, visit http://www.nimh.nih.gov.

About the National Institutes of Health (NIH)
NIH, the nation's medical research agency, includes 27 Institutes and Centers and is a component of the U.S. Department of Health and Human Services. NIH is the primary federal agency conducting and supporting basic, clinical, and translational medical research, and is investigating the causes, treatments, and cures for both common and rare diseases. For more information, visit www.nih.gov.