Skeletal Wonder From Down Under 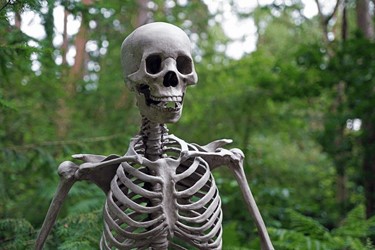 What a perfect day to talk about skeletons! There’s even a Halloween web page just for skeleton jokes. Why are the human skeleton’s 206 bones so interesting? I remember trick-or-treating as a child, wearing a hand-me-down skeleton costume from my older brother. I thought it looked so cool, especially in the dark, but when I was leaving the house, my mom made me wear a coat because it was chilly outside. It completely ruined my vibe! I looked like a skull floating above a pair of bony hands and legs (which is actually pretty cool now that I think about it), but I had no torso! What is a skeleton without a sternum and some ribs?

That, my friends, is indeed today’s question. A skeleton without a sternum and some ribs represents a person who may benefit from technologies by Melbourne, Australia-based medical device company Anatomics.

Anatomics was founded in 1996 by Australian neurosurgeon Paul D’Urso. He was intrigued by stereo lithography in the early 1990s, and wondered if 3D imaging could be integrated with 3D printing to make biomodels of skeletal structures for use in planning complex neurosurgery cases.

“Anatomics started selling biomodels and patient-specific cutting guides and templates in Australia to use in orthopedic and neuro-surgery,” said Dean Carson, VP of U.S. operations for Anatomics. After about 15 years of slow organic growth, Anatomics established a partnership with Australia’s Commonwealth Scientific and Industrial Research Organisation (CSIRO), allowing the company to manufacture implants at the CSIRO 3D-printing farm, Lab 22.

When Penelope Heller was 17 years old, she survived a JetSki accident nearly unscathed, only to later learn - under post-accident observation - that she had a mass on her sternum. She was later diagnosed with chondrosarcoma (a rare bone cancer) and had no choice other than removal of her sternum and part of her ribcage. Following initial resection and reconstructive surgery with an improvised sternum implant, made from off-the-shelf materials, Heller was in pain and experienced breathing issues. She sought out further treatment to solve those problems.

Heller found news coverage about a patient in Spain who had undergone a similar sternum implant surgery, but the patient in Spain received a custom 3D-printed implant for sternal reconstruction. The patient-specific titanium implant was designed by Anatomics. Heller was hopeful that she might be able to have a second surgery to remove the standard implant, and replace it with a custom 3D-printed sternum and rib cage from Anatomics.

However, Heller’s positive outlook soon was challenged. She and her family learned that the Anatomics’ implant was not approved by the FDA. Heller’s family worked with Anatomics, the surgeon who would perform the surgery, and the FDA to obtain approval under the FDA’s Expanded Access (Compassionate Use) program. Heller, now 21 years old, received the implant and became the first patient in the U.S. to receive a 3D printed titanium and polymer sternum implant. Heller tells a bit of her own story about taking matters into her own hands in this Youtube video.

“Our implants were really targeted toward patients that had a very high unmet need, so we weren’t required to get regulatory approval for these custom products. Everywhere else in the world that we have been doing it, they were all one-of-a-kind cases,” Carson explained. “When we got to the U.S. more recently, I started digging into what the regulatory requirements were, and discovered Anatomics had two options to obtain approval to use the 3D-printed implant in the U.S. We could have sought approval as a custom device (which allows the sale of no more than five devices per year), or we had the Expanded Access option.”

“I reached out to both departments within the FDA and Expanded Access responded within five minutes, and that was about the average response time in all of my communication with them, all the way through to the approval. I was really happy to see how involved they were,” Carson continued.

He explained that the FDA engaged experts within the agency, in both 3D printing and the use of additive manufacturing in healthcare, to work with Anatomics, adding that the FDA kept regular contact and “they were so quick to respond, because they know anything through expanded access is going to be pretty serious.”

Eventually, Anatomics foresees obtaining clearance or approval under the traditional 510k or PMA pathways for their implants.

I asked Carson about other applications for Anatomics’ implants, beyond the thoracic cavity and he replied, “We are very much agnostic. We are talking with a couple of different U.S. patients at the moment, [who] are interested in getting complete calcaneus [heel] implants. They contacted us based on a publication and a bunch of press coverage for a patient-specific heel implant that we did in Australia. We also do a lot of stuff in the spine, so it’s head to toe.”