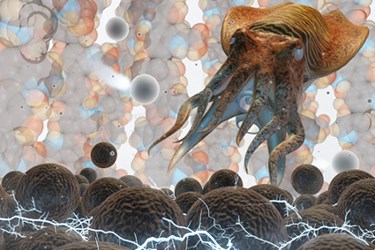 Researchers have found an unusual new source of power to charge ingestible or implanted medical devices: cuttlefish, a close relative of the squid.

A new generation of medical devices that are ingested or biodegradable "require new energy storage materials that are benign and can operate in hydrated environments," according to an announcement from Carnegie Mellon University.

Or, in layman’s terms, per Gizmodo: "A few years ago, a whole new crop of crazy medical devices started popping up — things like little robots that could crawl through your veins and clear blocked arteries. Scientists lauded the promise of ingestible electronics, but there was one big problem. How are we going to power these devices?"

Now, a promising new study shows that ink from cuttlefish can provide the electrode materials needed to power up these devices. The research comes from Carnegie Mellon University's Chris Bettinger and Jay Whitacre.

"We found that the melanin pigments in cuttlefish ink make it a perfect fit for use in battery electrodes that would ultimately be used in devices that operate in close proximity to sensitive living tissue," Bettinger said.

Greater patient safety may be a key benefit of the new discovery. "Conventional battery materials are not safe inside the body unless they’re encased in bulky protective cases that must eventually be surgically removed," MIT Technology Review said.

The findings build on earlier work by the same researchers. Their breakthroughs led to an ingestible medical device "no larger than ordinary pills," according to an earlier release from the university.

The Carnegie Mellon researchers are not the first to explore the prospect of electronic pills, according to the Review.

"A few companies, including Olympus, already make capsules that contain cameras; but these kinds of systems, which use traditional electronic and optical components to image the digestive system, can’t be swallowed regularly," the report said, citing Bettinger.