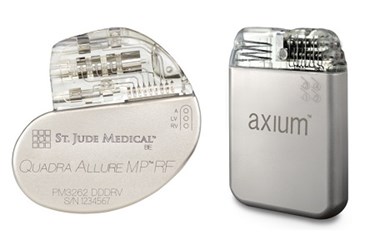 The FDA has approved two new technologies that expand St. Jude Medical’s portfolio for cardiac resynchronization therapy (CRT) and neurostimulation in the U.S. market. St. Jude announced that its MultiPoint Pacing (MPP) technology would be added to the company’s Quadra CRT device offerings in the beginning of 2016, and that the Axium Neurostimulator System was approved for dorsal root ganglion (DRG) stimulation for patients with chronic pain in their lower limbs.

CRT devices combat the degenerative effects of heart failure and resulting arrhythmias, but studies show many patients remain unresponsive to treatment long-term due to difficulty placing leads and predicting where the electrical pulses would be most effective. In 2011, St. Jude introduced quadripolar technology, which increased the number of electrodes per lead, allowing physicians to better tailor CRT to the individual patient and overcome some complications possible with traditional CRT.

With MPP technology, those options have expanded even further by allowing “physicians the opportunity to capture more left ventricular tissue quickly by delivering pacing pulses to multiple left ventricle locations rather than the traditional single pulse for each heart beat,” according to a St. Jude press release.

Also included in the FDA’s approval were new Quartet-LV leads, which have four electrodes and allow doctors to program two pulses from a single lead. By incorporating MPP technology and advanced leads, St. Jude believes its next-generation Quadra CRT defibrillators and pacemakers will provide a more customizable therapy for patients.

“Having the ability to truly individualize cardiac resynchronization therapy is a significant step forward in the clinical approach to treating some of our most complex heart failure patients,” said Gery Tomassoni, director of electrophysiology at Baptist Health Lexington. “MultiPoint Pacing Technology provides a new set of tools that can be non-invasively programmed in an attempt to improve CRT response, thus opening up an important new treatment option for many patients who may need it.”

The Star Tribune reported that in St. Jude-sponsored research, MPP technology increased the number of patients who responded to CRT by 19 percent over conventional systems.

The Axium System was designed by Spinal Modulation, Inc., which St. Jude acquired last year for $175 million. Though the system received CE Mark approval in 2011, a study completed last year comparing the system to traditional SCS systems was a major component of St. Jude’s application to the FDA.

“DRG stimulation with the Axium System is highly complementary to our current chronic pain product portfolio, and acquiring this technology will further our ability to partner with physicians to reduce the burden of chronic pain,” said St. Jude CEO, Michael Rousseau.