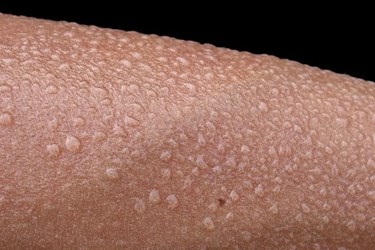 Wearable technology, like that seen in the fitness space, is making a transition to medical diagnostics. By analyzing sweat, a new patch can identify cystic fibrosis and may one day be used for monitoring blood glucose levels.

What if we could substitute a sampling of sweat for a blood sample?

Many would find that preferable to having blood drawn with a needle, and it may now be possible. We don’t often think of sweat as a bodily fluid useful for analyzing what’s going on in our bodies. However, sweat contains a significant amount of information about the metabolic activities that are happening in our bodies, and it is essentially available in real time, according to an article in IEEE Spectrum.

The new patch-type technology is being developed by researchers at the University of Cincinnati and is placed on the subject’s skin. The device consists of a multilayer structure, which is designed to draw fluid from the skin of a patient and deliver it to a flex circuit sensor contained in the patch. An antenna then delivers data to a smartphone where it can be analyzed. After analysis, it can provide information on the patient’s sweat, according to the IEEE article.

Sweat contains electrolytes, as most of us have heard from various sport drink advertisements. How the body deals with electrolytes can be revealed in the sweat. One key example is the diagnosis of cystic fibrosis, according to the IEEE article. Normally, cells in the upper portions of the sweat glands reabsorb much of the electrolytes present in sweat. The body understands that these ions are important and has adapted to collect and conserve them. In cystic fibrosis, however, this mechanism is flawed and leads to problems. The newly developed patch could detect this issue in a person’s sweat and help diagnose this disease.

Another possibility for the device is analyzing the levels of lactic acid in sweat and correlating that to blood glucose levels. Lactate is a byproduct of burning glucose without oxygen (anaerobic respiration), a condition that often occurs with diabetics as they approach a critical insulin situation. While this can be measured currently, the team is still struggling with how to predict blood glucose using lactate output, according to the article.

In addition to the exciting possibilities in diagnostics, another area being researched by the team is on-demand sweating. While measuring sweat holds much promise, people aren’t always exercising. To overcome this limitation, the team is looking at a process called iontophoresis. Basically, a small electrical current is applied to the skin, which, along with a medication called pilocarpine, induces the skin to sweat.

Electronic patch technology is rapidly gaining momentum in the medical device research arena as the need for rapid diagnostics is realized. Recently, in an article published on Med Device Online, a patch technology with electronic components was discussed with the potential for multiple sensing applications.