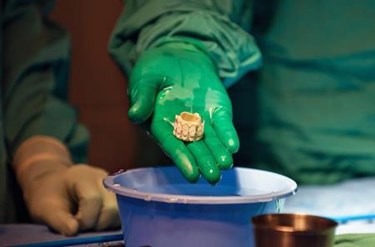 It is hard to believe that it has only been five years since the first transcatheter aortic valve replacement device (TAVR) was approved for commercial use. Since that time, its use to treat aortic stenosis (AS) has ballooned, as has the revenue stream this relatively new technology produces. Conservative estimates placed the global TAVR market at $1 billion in 2015. Research consultants GlobalData project that number to reach $3 billion over the next five years, while Edwards Lifesciences CEO Michael Mussallem sees the opportunity being closer to $5 billion by 2021.

So, what are the keys to TAVR’s rapid success? Simply put, there was an unmet medical need: a very large pool of high-risk patients suffering from severe AS and requiring valve repair, who previously were deemed too risky to survive surgical aortic valve replacement (SAVR). SAVR is an open-heart procedure, requires the patient to be put on a cardiopulmonary bypass machine during surgery, and requires cracking of the chest to access the heart. Prior to TAVR, patients deemed unfit for surgery were left without an alternative treatment, and many such patients died as a result.

The less invasive TAVR procedure allows this high-risk group to receive new, life-extending valves. What was unexpected, though, was the impressive performance of TAVR compared to SAVR — the latter once thought to be the gold standard of valve repair. The latest studies have found TAVR to be equal or superior to open surgical repair in one-year patient outcomes. Due to this success, the FDA has approved studies on intermediate-risk patients, and it is believed the agency soon will approve similar studies on low-risk groups.

Is the natural progression a complete phasing out of SAVR procedures? Not so fast. There are a few obstacles in the road. First, TAVR devices are five to ten times more expensive their counterparts. As global healthcare shifts toward a value-based approach, defending the total cost of care across the patient continuum will be required. Another concern, because of the newness of the technology, is the unknown long-term performance of TAVR devices. Most patients who have been treated with TAVR are in excess of 80 years of age, making long-term device performance tracking challenging. How the device performs in younger, lower-risk patients, over time, will be key to its future growth.

To explore some of these questions, I spoke with Craig Thompson, MD, who is the SVP/CMO of Boston Scientific’s Interventional Cardiology unit. Dr. Thompson shared his opinion on several TAVR market drivers and offered an inside look at Boston Scientific’s Lotus valve system.

Med Device Online: Can you give an overview of the Lotus technology?

Dr. Craig Thompson: Lotus is a TAVR system. The key feature of Lotus, that distinguishes it from other TAVR devices, is that it is fully repositionable in its final locked positon. A surgical team can have it completely implanted and know exactly what the result is going to be before they leave the catheterization laboratory. If they are happy with it, they can release the device. If not, it has the option to be retrieved and/or repositioned.

There is a point of no return with all of the other devices available in the United States and Europe, where, when they let it go, they are not totally sure where this thing is going to end up in relation to key areas of the heart anatomy they were trying to target. Lotus’s positional surety adds safety for the patient, because it eliminates the need for additional procedures, and it has created a much more relaxed and controlled surgical environment.

Lotus also has a polymer wrap, called an adaptive seal, which acts to fill any small gaps on the sides of the new valve and the existing heart structure. It minimizes the occurrence of paravalvular aortic regurgitation or paravalvular leaks (PVLs), which are associated with higher rates of patient mortality from valve replacement, and studies conducted to this point show Lotus as a best-in-class offering in this regard.

MDO: How have those studies shaped changes in the next generation of Boston Scientific valves?

Thompson: We really focused on reducing the profile (size) of the device, and we did. Our next-generation product, Lotus Edge, is a more flexible device that received CE Mark approval in September. Its lower profile allows it to access much smaller vessels, meaning that patients previously disqualified for TAVR due to structural anatomy restrictions now can utilize this procedure.

We also have made modifications to the delivery system, with the goal of reducing the interaction with the heart’s conduction system and, in turn, reducing the need for permanent pacemakers. That is still an ongoing project, but very promising so far.

MDO: TAVR technology only is used in the U.S. for high-risk patients. Considering the continued success and evolution of TAVR, will it soon be offered to a broader group of patients?

Thompson: Yes. The Reprise lll trial evaluated Lotus versus Medtronic’s CoreValve in high and extreme-risk patients. We currently are discussing the next steps to evaluate a lower-risk population.

This latter investigation, which will be known as Reprise IV, will be similar to what we see with both Medtronic and Edwards Lifesciences pursuing trials in intermediate-risk patients, and even low-risk patients. That combined data is going to create an information base that may support a broad utilization, irrespective of patient risk, depending on results of these next rounds of studies.

MDO: In general, the ratio of surgeons to patients, within a given specialty, is lower internationally versus the U.S. Will TAVR offer international patients previously unattainable therapeutic options?

Thompson: I think it offers the opportunity. The skill level and access to care is highly variable among the various regions. In other words, you might see higher volume operators and greater referral in certain pockets of Europe than you see in the United States, for certain procedures.

This would be different in India, China, or Latin America. But I think the more options caregivers have, in order to be able to manage their patients, the better. The goal is to actually bring the care to a successful conclusion, whether it is skilled open surgery or skilled TAVR. I think that applies across the board.

MDO: While risk analysis supports TAVR as equal or superior to SAVR in stroke and mortality rates, cost is creating a barrier. When will this change?

Thompson: That is going to need continual re-assessment. My bias is that it will prove to be less expensive over time. I think we will see economic incentives to providers and patients to consider that direction, because of reduced length of the required hospital stay. Some of the complications that patients can encounter with an open chest procedure, you don’t tend to see with the transcatheters. All these considerations need to be part of that larger evaluation.

Ultimately, the economic drivers will depend on the cost of the device and the procedure up-front, as well, and these continue to evolve over time. It was certainly promising with the first round of partner studies, in terms of the economic potential, and that was with the first-generation device. The field has really transformed over that short period of time, and it is incumbent on the large (provider/payer) programs to advance their understanding of the TAVR outcomes data, as well.