The Impact Of U.S. Tax Reform And Trade Policy On The Medtech Industry 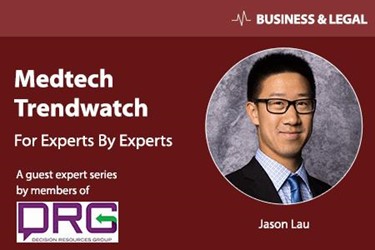 This article is the second in a two-part series examining the early repercussions of Donald Trump’s presidency on medtech. Part one investigates the potential effects of a full or partial ACA repeal.

As efforts to repeal and replace the Affordable Care Act continue, the implications of potential tax reform and trade policies on the medtech industry should be considered. This article will present the impact of a border adjustment and a border tariff on medical device companies, as well as the dynamics between the U.S., Mexico, and China.

A cornerstone of tax reform currently being discussed is the border adjustment proposed by House Speaker Paul Ryan and Ways and Means Committee Chair Kevin Brady. The border adjustment is a tax that would apply to imported goods only, while exported goods would be exempt. Conceptually, it is similar to a value-added tax, and is designed to be a tax on domestic consumption. The rate being proposed is 20 percent, which could raise up to $1 billion in tax revenue and would offset losses from the corporate tax cut President Trump had promised.

The border adjustment is different from the border tax proposed by President Trump (see below), because it would apply to profits generated from all products sold in the U.S., regardless of where the company is located, which would eliminate tax advantages gained by company relocation. For example, a deal like the Covidien acquisition, which allowed Medtronic to domicile its headquarters in Ireland, would no longer offer as great a benefit with a border adjustment in place. In short, the border adjustment aims to encourage companies to continue basing themselves in the U.S.

The border adjustment also is different from the current tax system, in which profits generated by U.S. companies from foreign sales are taxed only when they are repatriated, which forces companies to keep their cash outside the U.S. Again invoking the Medtronic example, before it acquired Covidien, Medtronic was only able to access 35 percent of its cash, which limited its ability to invest in U.S.-based R&D and return shareholder value without taking on debt.

However, the border adjustment has faced strong opposition from companies and retailers that are heavily dependent on imported goods. At this time, it is uncertain whether the plan will even make it through Congress because some Republicans are wary of its consequences; all it would take is three Senate Republicans to vote against party lines for the plan to fail.

President Trump also has given mixed signals about the plan. Soon after taking office, Trump called the idea a “bad deal” because of its complexity and strengthening effect on the dollar. But, in recent weeks, he has vaguely endorsed the border adjustment by suggesting a tax plan will be introduced soon.

With a border adjustment, one can expect that American medtech companies with significant domestic operations and export revenue will stand to benefit. Although these companies will be taxed up front when imported parts are purchased for device manufacturing, as well as after a domestic transaction occurs, they can immediately repatriate foreign profits and put that liquidity to use.

On the demand side, though, buyers of medical devices may face rising prices in the short term. In theory, a border adjustment would increase the demand and, therefore, the value of the U.S. dollar, by making imported goods more expensive and less desirable, while making U.S.-exported goods less expensive and more desirable in other countries. An increase in prices should not be felt by an American buyer because of dollar appreciation. But, in all likelihood, the dollar will not appreciate as dramatically as theory dictates because currency fluctuations are less dependent on trade than they are on financially-driven events. If the dollar does not appreciate immediately and proportionally, then, in the short term, imported goods will be more expensive.

During his presidential campaign, Donald Trump called for a “very major” border tax — which is technically a tariff — as high as 35 percent, to be imposed on American companies that outsource or offshore their operations, but then sell their products back in the U.S. The aim of the tariff is to discourage companies from moving their operations out of the U.S., as well as an attempt to bring back manufacturing jobs. Because the tariff can be applied against certain countries — although this could incite reciprocation, which would effectively make both countries lose — the tariff allows Mr. Trump to penalize countries that are attractive offshore targets, such as Mexico or China (see below).

The lack of specifics offered by Trump about this tariff makes it difficult to predict its impact on the medtech industry, if any. Trump may limit the tariff to apply only to those industries and goods that make up the biggest chunk of the U.S. trade deficit, such as cars or consumer electronics, while exempting medical devices. Consider the fact that, in 2015, Mexico ran a $52 billion surplus on vehicles with the U.S., but exported only about $12 billion of medical devices to the States; there are certainly several other industries and goods that can be targeted before medical devices.

Adding to this, in recent weeks, Trump’s border tax idea has taken a backseat to the more pragmatic border adjustment plan, so it remains to be seen whether a tax will be enacted. However, unlike the border adjustment (which constitutes tax reform), Trump’s idea (which is a trade policy) does not require Congressional approval and the president has the authority to sign it into law.

For the sake of argument, let’s say that Trump’s border tariff is enforced on medical devices. Would it be a significant enough barrier to prevent companies from outsourcing? Are the savings offered by outsourcing greater than the tariff imposed? In general, two options would exist:

The latter option is less likely because it involves both higher domestic labor costs and the higher cost of any imported components, since these too would be taxed. Indeed, when you look at other manufacturing industries, companies have said they would continue to invest in foreign manufacturing due to cost.

For medtech companies, a higher cost of goods sold (COGS) would reduce profitability and cash flow. For young companies or those already faced with high COGS, Trump’s proposed lower corporate tax rate of 15 percent may not be able to account for the loss of profit from the border tariff.

Moreover, if a trade war broke out and countries started to apply tariffs to U.S.-exported goods, this would raise the cost of medical devices on a more global scale. A trade war could also pose a more significant burden on U.S. companies than on non-U.S. companies, because the former may be less favored in emerging markets.

Back in the U.S., a border tax would have a significant impact on the healthcare system and the average American. Overall prices of medical devices in the U.S. would rise, leading to reduced profitability for healthcare providers, especially because reimbursement would be unlikely to rise congruent with more expensive device costs. In response, physicians would be more selective at taking assignment for procedures, which would negatively impact patients’ access to services, thus reducing procedure volumes and additional demand for medical devices. On the other hand, if reimbursement was to rise, this cost may be passed on to patients in the form of higher premiums, deductibles, and/or coinsurance.

Most major medtech companies already have a footprint in Mexico, so it would take a significant change in trade and tax policy for these companies to reverse course. Some companies, like B. Braun, CareFusion, and Medline Industries, have increased their investment over the past few years to boost production capacity in the country. Other companies have shifted entire manufacturing divisions outright to Mexico, as Teleflex did with its North Carolina Arrow plant.

However, because Mexico is a large exporter of hospital supplies and surgical disposables — such as syringes and catheters, as well as orthopedic devices — any tariff on goods produced in Mexico will have ramifications for healthcare costs in the U.S.

A border adjustment or tariff would have a chilling effect on further investment in Mexico, as medtech companies likely would consider alternative offshore locations. Because much of Mexico’s economy is dependent on foreign investment, a slowdown in economic and disposable income growth would lead to reduced funding for Seguro Popular — Mexico’s universal healthcare program, which receives funding from income taxes and government contributions — and an increase in the Mexican population reliant on public healthcare. Together, these factors would result in limited access to care, which would ultimately hamper the outlook of the Mexican medtech market.

On the topic of China, President Trump has focused on the issue of competitiveness and the strength of both countries’ currencies. Trump has openly criticized the strength of the U.S. dollar, saying it has made American products less competitive compared to Chinese products, and he has accused China of keeping the yuan weak to maintain its advantage, threatening to label China a currency manipulator.

However, as mentioned above, a border adjustment could result in an appreciation of the dollar, while a border tariff could result in a rise in prices and higher wages if more manufacturing is brought back to the U.S., which would spur inflation and further strengthen the dollar. This would make U.S. exports less competitive against goods produced by other countries, such as China, and would represent a headwind facing U.S. medtech companies hoping to penetrate the Chinese market to fuel revenue growth.

Given the maturity of the current U.S. medtech market, being less competitive in China would be detrimental for industry players. Already, China is home to thousands of local companies that are given regulatory advantages over foreign competition, so any American policies that disfavor China will lead to further barriers set against U.S. companies seeking to enter the country. This can involve tactics such as increasing the amount of red tape or clinical requirements needed to get a device approved. China’s sphere of influence in the Asia Pacific region — especially with the U.S. exiting the Trans-Pacific Partnership — may also grow and play a role in how neighboring markets will conduct business. These are some challenges that medtech companies will need to consider when competing in the region.

Trump has recently moderated his rhetoric to maintain diplomatic Sino-American relations, but how these two countries interact going forward will depend on which tax and trade policies the U.S. ends up pursuing.

Click to read the first half of this two-part series.

Jason Lau is a Principal Analyst at Decision Resources Group, where he covers markets related to endoscopy and minimally invasive surgery. His areas of focus include gastroenterology, bariatrics, and urology. He holds a B.Sc. from the University of Toronto and a M.A. from New York University.