The Market Outlook For Robotic-Assisted Surgery In 2022 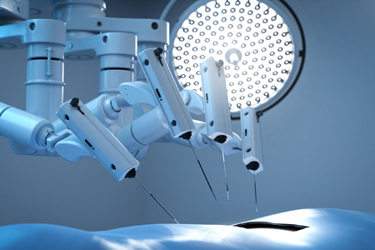 Lack of clinical evidence and commercial barriers have historically limited the adoption of robotic-assisted surgery (RAS), despite significant expected benefits to both surgeons and patients. Now, novel technology, new market players, and disruptive business models look to drive expansion in a market expected to reach more than $20 billion in 2030. 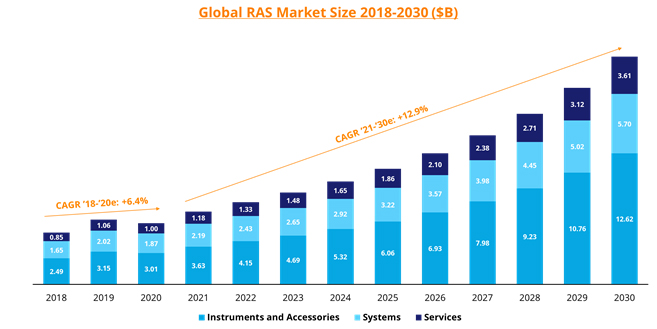 Over the last 20 years, the RAS market has been led by complex systems, ranging from passive to active, with master-slave robots like Intuitive Surgical’s da Vinci being the most established and laparoscopy the most penetrated market.

Today, laparoscopic procedures can be performed using one of two approaches: multi-port and single port. While multi-port remains predominant with a strong outlook, use of the single-port laparoscopy robot may be increasing, as the complexity of its structural design is offset by lower consumption of consumables and reduced patient trauma.

RAS adoption also varies across laparoscopic procedures, largely due to ergonomic and length requirements as well as anatomy complexity. Looking ahead, some laparoscopic procedures, like pancreatectomy and bariatric procedures, are expected to grow at market pace, while RAS penetration in cholecystectomies looks to remain limited. Overall RAS adoption also has some specific market dependencies as it’s on track to expand into hernia repair, particularly in the U.S. market, where RAS hernia repair has been a key growth area over the last two years. RAS in hernia repair is driving the transition from open to minimally invasive surgery, reducing the learning curve in laparoscopy, and providing hospitals with a powerful marketing opportunity.

Outside laparoscopic applications, RAS is positioned to make a difference in endoluminal, percutaneous, and radiosurgery by increasing procedure accuracy and consistency. Harel Gadot, executive chairman and president of XACT Robotics, a robotic medical device venture, says RAS will truly democratize procedures. “In the U.S., there are 30,000 radiologists but only 3,000 are interventional radiologists, due to the skill required to manually perform an exam/surgery through a percutaneous approach,” he says. “Robots are increasing the accuracy and efficiency of the procedures, allowing more physicians to perform exams and in different settings: inpatient, outpatient, and ambulatory centers.”

Across all applications, RAS companies are focused on improving the user experience for surgeons — refining haptic feedback and reducing the learning curve on their respective systems. These tactile improvements are critical to encouraging widespread adoption of RAS across clinical settings.

To date, RAS has had higher adoption in academic settings and larger hospitals compared to smaller ones, often due to the procurement criteria and budget constraints. Specifically, the procurement process is initiated by clinical stakeholders, but non-clinical stakeholders are the ultimate decision makers and are driven mainly by economic and access-related considerations. For this reason, RAS remains critically limited in smaller or non-academic hospital settings as well as outpatient care centers.

The overall high cost of ownership and the lack of reimbursement are the main factors limiting the purchase of RAS systems, especially in these smaller settings. However, new market players with advanced technology, such as AI or augmented reality capabilities, and business models aimed at lowering costs are well positioned to expand into these previously less competitive spaces.

Additionally, players are shifting toward more flexible pricing models like leasing, renting, or pay-per-use, as well as reviewing the physical footprint of robots. Current product development analysis shows a strong interest in procedure-specific robots that are more affordable and compact without compromising performance. This would allow smaller centers where physical space is an issue to access this technology while addressing the cost barrier.

Tal Wenderow, vice president of Genesis ventures, says reducing the physical size of the robot is just the beginning. “Platforms will become smaller as the technology miniaturization process goes further,” he says. “The possibility of perfectly matching a robotic system with a device will also help to reduce the footprint, ideally having a robotic system with the tool built-in.”

Beyond reduced size and cost, the implementation of artificial intelligence (AI), augmented reality, miniaturization of systems, and tele-surgery by new market players is expected to further facilitate the adoption and capabilities of robotic surgical systems worldwide.

The competitive landscape of RAS will drive access and affordability across a market that has been an oligopoly in many segments. Intuitive Surgical holds the majority of market share at 61%, with Stryker a distant second at just 16%, but this new competition and accompanying technology is expected to reshape the market, increasing access and affordability through price pressure and novel business models.

Most companies hold less than 1% each of market share and the current landscape is increasingly crowded with new players — as well as large medtech companies expanding into RAS through acquisitions.

Johnson & Johnson, for example, entered the space with two separate acquisitions: the VELYS robotic-assisted table-mounted platform and the Monarch platform, a robotic endoscope that uses an intuitive controller interface to navigate the surgical field. It is also working on a third RAS platform for general surgery, Ottava, with advanced visualization, machine learning, and a connected ecosystem.

As Johnson & Johnson looks to disrupt the space through investment in leading-edge digital technology, other companies, like Medtronic, an established leader in the RAS spinal segment, is keeping pace by bolstering its existing technology. Medtronic’s Mazor X System incorporates real-time vision, pre- and intra-operative planning, optimal implant trajectory and navigation, and 3-D analytics. And in October 2021, Medtronic received a CE for Hugo, its modular, multi-platform RAS system that combines wristed instruments, 3D visualization, and a cloud-based surgical video capture option.

Complementing the introduction of new players and technology, 2021 also saw the largest capital raise for RAS. 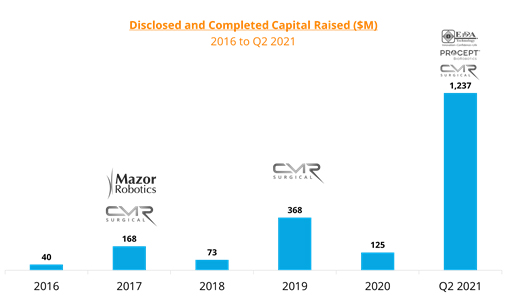 CMR Surgical, the U.K.’s leading surgical robotics company, raised $600 million at a $3 billion valuation. The developer of the Versius Laparoscopic Robotic System, CMR’s current focus is on expansion into Europe, the Middle East, and Asia. This tracks with overall market forecasting that while North America had the largest global market share in 2020, the EU-5 market is expected to exhibit the fastest growth, with a CAGR of around 18%. And although the U.S. and Israel currently have the highest number of companies and funding per company, respectively, RAS interest is now growing in China based on recent funding activity.

With more than 35 robots on the market providing support for a range of surgical applications and over 150 currently being developed by commercial stage companies and start-ups, new technology and market players are already expanding the market, with no sign of slowing.

This article is adapted from Alira Health’s recent analysis.

Piergiulio Lauriano, MBA, is a partner in Alira Health’s Management Consulting Division. He is a strategist and innovator who combines a passion for business, finance, and technology. His early career included management consulting in the U.S. and Italy, where he specialized in healthcare. His market experience at Alira Health includes surgery comprising MIS and robotics, patient monitoring, oncology, addiction, diabetes, orthopedics, cell therapies, plasma derivatives, infection prevention and control, consumer health, and wound care. He pursued his MBA at IE Business School, where he has been selected for the MBA Advanced Management Program at Yale School of Management. In addition, he holds a MS in managerial engineering from École Centrale de Nantes and a MS in robotics engineering from the University of Genova.

David Uffer joined Alira Health with more than 25 years of management experience in the medical device, products, and clinical diagnostics field. He has led strategy development, strategic planning, and business development activities in these fields for mid- and large-cap public companies. He has directed business development deals ranging from M&A, licensing, distribution, and co-development for companies such as Medtronic (legacy Covidien) in its respiratory and medical products business, as well as Hologic and Boston Scientific. He has held management roles at Integra Lifesciences and Abbott Labs. Uffer has a BA from Clark University and an MBA from Thunderbird School of Global Management.​