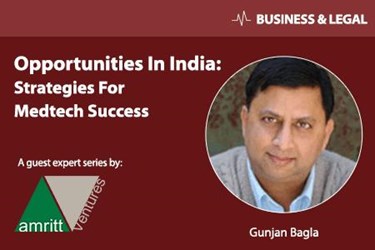 India’s medical device industry is growing at about 15 percent annually and is expected to reach $25 to $30 billion by 2025, according to an Economic Times report. This growth is being driven by a combination of indigenous manufacturing, exports, and local innovation.

India now is a springboard for developing medical device companies who envision a big future on a global scale. Despite global medtech giants’ domination of India’s medical device industry and unfavorable domestic regulations, these startups hope to make lifesaving medical technology more accessible in a country where high-quality, affordable healthcare is scarce. Their products and ideas stand ready to impact markets across Africa, low-income countries in South America, Asia, and even Eastern Europe.

“We are seeing Indian medical devices startups being able to innovate and bring products to the market faster than their western counterparts at a price point that is very attractive,” says Barath Shankar Subramanian, an early backer of Forus Health, a Bangalore-based medical device startup. Forus Health CEO K. Chandrasekar remarked that India is an ideal place for his company, as it provides “enough technical capabilities to create both create hardware, software, and also manufacture [our product].”

Forus is among three startups in south India creating disruptive technology, domestically, that could have major implications for the practice of medicine, both in India and globally.

Of the 37 million people across the globe who are blind, more than 15 million are from India, and 75 percent of these cases are considered to have been avoidable. Forus Health’s 3nethra device is designed to take a picture of the eye and, from that image, to detect the five major ailments that lead to 90 percent of blindness: diabetic retinopathy, cataracts, glaucoma, cornea problems, and refractive errors. The device has a retinal camera with a built-in refractometer that captures images of the retina and, through its image processing algorithm, generates an automatic problem report. The company has established over 1150 installations across 25 countries, including Great Britain, France, Brazil, and China.

“We have created a niche segment – screening— and we do not find any competition in there,” said Chandrasekar.

In the past, just 7 percent of Indians at various stages of blindness have been screened and treated, due to limited vision care access. The country’s current vision care ecosystem cannot buy enough of the expensive, legacy diagnostic devices for screening, and it cannot train a sufficient number of ophthalmologists. According to Ajeet Bhardwaj, former president of the Asia Pacific Optometrists Organization, India has just 12,000 ophthalmologists, and they have little time to conduct blindness-preventing surgeries because they are overwhelmed with general eye check-ups.

Forus Health intends that ophthalmic doctors deploying the 3Nethra system will have more time to focus on patients in need of their costly and relatively rare (in India) qualifications. Furthermore, 3nethra can be combined with telemedicine technology; this connectivity helps eye doctors to offer remote diagnoses for rural patients, making the product appealing economically and logistically. The device can be installed in kiosks in places with high foot traffic, like airports, railway stations, and even malls. Finally, the device’s cost makes it viable: While most non-mydriatic cameras cost at least $28,000,  3nethra costs just over $8,000 in India.

Like Forus Health, many other medtech startups in India have been able to identify and target key market groups in order to build up their companies. Bangalore-based Pandorum Technologies’ co-founder, Arun Chandru, claims that his company uses its proprietary technology to design and “manufacture” (their term, rather than “grow”) functional, three-dimensional living human tissue, intended for medical research, therapeutic, and other applications.

Pandorum’s product, Chandru says, is well situated in the India market because there are not many established players in this sector, due to the relatively high entry barrier imposed by the multi-disciplinary R&D required. However, Chandru claims that Pandorum, like other startups, has advantages in terms of nimbleness and faster translation of ideas into reality.

Also located in Bangalore, AIndra Systems, sells an affordable and portable point-of-care cervical cancer screening tool. The device automates the analysis of pap smear slides, providing a means for women in remote geographical areas to access screening at local healthcare centers. The setup has an on-board computing unit that classifies the sample as either normal or abnormal, and then sends it to a pathologist to confirm the findings. The pathologist can either endorse or reject the machine’s findings, and this reply is remembered by the machine, which uses self-learning to build a database. The whole process takes less than a day's time.

“The fact that we are based out of India is certainly an advantage as we are aware of the market dynamics and local sensitivities better than the MNC's who operate in this space,” says Adarsh Natarajan, CEO and founder of AIndra Systems.

An Ecosystem That Supports Innovation

Many Indian startups have found local support in the form of government grants, funding from universities and research centers, and publicity.

Forus Health tells us they have received funding from India’s Department of Biotechnology and the Technology Development Board — an organization within the government that accelerates the development and commercialization of indigenous technology through equity, soft loans, or grants — as well as $13 million from venture capitalists. Pandorum is supported by grants from the Biotechnology Industry Research Assistance Council, is incubated at the Centre for Cellular and Molecular Platforms, Bangalore Bio-Cluster, and has received $300,000 in private funding. AIndra has received several grants and a small equity component, as well as backing from Villgro — a Social Enterprise Incubator associated with The Rockefeller Foundation — The Lemelson Foundation, and Citi Foundation.

Medical device companies looking to establish a foothold in India should focus on collecting sufficient market research, keeping close relations with consumers during development, and partnering with the local government to raise funding and support, Natarajan suggests. Through this approach, he claims, India can be the place where a company can “stay true to [its] mission while enhancing the product.”

India has proven to be a viable and opportunity-filled environment for medical device startups, as well as established companies looking to move into the market. Furthermore, the availability of like-minded, skilled manpower in India can help medtechs to build strong, multi-disciplinary development teams, says Chandru.

This is just a small sampling of the India-based medical device entrepreneurs poised to change the world with innovative, affordable, and — above all — accessible technologies. Who will make the next big splash? Stay tuned.