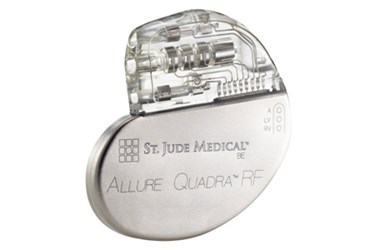 St. Jude Medical announced earlier this week that the FDA has granted approval for the Allure Quadra Cardiac Resynchronization Therapy Pacemaker (CRT-P), along with the Assurity and Endurity families of pacemakers.

The company highlighted the approval of the Allure Quadra as opening the door to the introduction of quadripolar pacing technology in the United States.

“In international markets where the Allure Quadra CRT pacemaker is available, we experience strong demand and significant share capture as the technology has become the standard of care for many physicians,” Eric S. Fain, group president at St. Jude, said in a press release issued by the company.

According to the release, the quadripolar technology of the new pacemakers gives healthcare providers additional pacing options when compared to the more traditional bipolar pacing systems.

“Adding the clinical benefits of quadripolar technology to pacemakers will expand the benefits of this therapy to patients,” said Raffaele Corbisiero, chair of electrophysiology and pacing and director of the Electromechanical Therapy Institute at the Deborah Heart and Lung Center in Browns Mills, NJ. “These features and additional pacing options will allow me to provide better care to patients diagnosed with heart failure and reduce the need for repeat procedures, especially for those patients who have been historically hard to treat due to tissue damage in their heart.”

St. Jude also said that the new Allure Quadra pacemakers will introduce improvements to patient monitoring and data sharing, as device information is automatically transmitted from the pacemaker directly to the Merlin.net Patient Care Network (PCN), St. Jude’s medical database. From there, data is added to the patient’s electronic health records and can be viewed by healthcare professionals.

The new pacemakers received European market clearance in 2013. With FDA approval now secured, the company plans to release its three newest pacemakers to U.S. markets sometime before the end of the first quarter in 2014.

St. Jude has been very active in the pacemaker space this year. Last month, the company announced the first U.S. implant and initiation of a clinical trial for its Nanostim device, a tiny, leadless pacemaker that is implanted in the heart using a catheter.