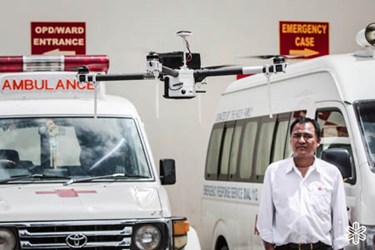 A Palo Alto- and London-based startup company is developing unmanned aerial vehicle (UAV) technology with a new twist. Instead of performing remote surveillance or delivering explosives with surgical accuracy, they distribute payloads of medical supplies.

Reaching remote areas in developing countries can be difficult, especially in times of disaster. Roads may not be accessible, or a region may be quarantined due to an infectious disease like Ebola. Scenarios like these demand an alternative approach to the delivery of much needed medications, diagnostics, and supplies. To address this need, Matternet is developing small drones that can deliver compact medical payloads.

“People are all worried about Ebola right now; you could fly in medications, supplies right to the areas needed,” said Dr. Jeremy Tucker, an emergency physician at MedStar St. Mary’s Hospital, in a Reuters Health article. “What I envision in the future: someone in charge of disaster relief could summon a mobile clinic, and basically with the push of a button, have mobile drones dropping off supplies, like tents and water.”

The startup company’s name, Matternet, refers to a network for transporting matter, according to Reuters. In the article, Paola Santana, the company’s chief regulatory and strategy officer, said their drones could be a cost-effective alternative to transport trucks.

“We started to think about moving stuff that was very important, that could save lives,” Santana told Reuters. "We thought about moving very small, health-related payloads such as diagnostics, medicine and clinical supplies and creating a network with that."

Matternet expects to launch medical drones in cooperation with nonprofit organizations in other countries as early as next year, according to Reuters. Santana said the Federal Aviation Authority has not granted them permission to fly their drones in U.S. airspace, so the company had to perform test runs in other countries.

According to Matternet’s website, field trials for their drones were first carried out in 2012 in the Dominican Republic and Haiti. After the massive Haitian earthquake in 2010, a mission camp was setup, and in 2012 Matternet made trial deliveries to the camp. Currently, field testing continues in Bhutan where the average speed on roads can be as low as 10 miles per hour. Matternet’s goal is to beat that speed and deliver in a more timely fashion.

The logistics of emergency relief in developing countries is an area that is constantly in need of innovative approaches and solutions. Other specialized forms of delivery include the need to control the temperature of certain medical supplies, which was discussed in a recent article published on Med Device Online.