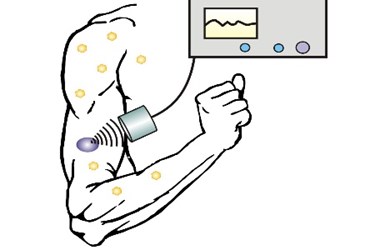 A new nanotechnology-based technique for regulating blood sugar in diabetics may give patients the ability to release insulin painlessly using a small ultrasound device, allowing them to go days between injections – rather than using needles to give themselves multiple insulin injections each day. The technique was developed by researchers at North Carolina State University and the University of North Carolina at Chapel Hill.

“This is hopefully a big step toward giving diabetics a more painless method of maintaining healthy blood sugar levels,” says Dr. Zhen Gu, senior author of a paper on the research and an assistant professor in the joint biomedical engineering program at NC State and UNC-Chapel Hill.

The technique involves injecting biocompatible and biodegradable nanoparticles into a patient’s skin. The nanoparticles are made out of poly(lactic-co-glycolic) acid (PLGA) and are filled with insulin.

The coated PLGA nanoparticles are also porous. Once in the body, the insulin begins to diffuse from the nanoparticles. But the bulk of the insulin doesn’t stray far – it is suspended in a de facto reservoir in the subcutaneous layer of the skin by the electrostatic force of the nano-network. This essentially creates a dose of insulin that is simply waiting to be delivered into the bloodstream.

When a patient has type 1 or advanced type 2 diabetes, his or her body needs additional insulin, a hormone that transports glucose – or blood sugar – from the bloodstream into the body’s cells. These diabetes patients must inject insulin as needed to ensure their blood sugar levels are in the “normal” range. However, these injections can be painful.

Using the new technology developed by Gu’s team, a diabetes patient doesn’t have to inject a dose of insulin – it’s already there. Instead, patients can use a small, hand-held device to apply focused ultrasound waves to the site of the nano-network, painlessly releasing the insulin from its de facto reservoir into the bloodstream.

The researchers believe the technique works because the ultrasound waves excite microscopic gas bubbles in the tissue, temporarily disrupting nano-network in the subcutaneous layer of the skin. That disruption pushes the nanoparticles apart, relaxing the electrostatic force being exerted on the insulin in the reservoir. This allows the insulin to begin entering the bloodstream – a process hastened by the effect of the ultrasound waves pushing on the insulin.

“We know this technique works, and we think this is how it works, but we are still trying to determine the precise details,” says Dr. Yun Jing, an assistant professor of mechanical engineering at NC State and co-corresponding author of the paper.

When the ultrasound is removed, the electrostatic force reasserts itself and pulls the nanoparticles in the nano-network back together. The nanoparticles then diffuse more insulin, refilling the reservoir.

“We’ve done proof-of-concept testing in laboratory mice with type 1 diabetes,” Gu says. “We found that this technique achieves a quick release of insulin into the bloodstream, and that the nano-networks contain enough insulin to regulate blood glucose levels for up to 10 days.”

“When the insulin runs out, you have to inject a new nano-network,” says Jin Di, lead author of the paper and a Ph.D. student in Gu’s research lab. “The previous nano-network is dissolved and fully absorbed into the body in a few weeks.”

“This advance will certainly give millions of people with diabetes worldwide hope that better days are ahead,” says Dr. John Buse, director of UNC-Chapel Hill’s Diabetes Care Center and deputy director of UNC-Chapel Hill’s NIH Clinical and Translational Sciences Award. “We must work to translate these exciting studies in the lab to clinical practice.”

The paper, “Ultrasound-Triggered Regulation of Blood Glucose Levels Using Injectable Nano-Network,” is published online in Advanced Healthcare Materials and was selected as a cover article. The paper was co-authored by Jennifer Price, an undergraduate in the joint biomedical engineering program; Dr. Xiao Gu, of Yangzhou University; and Dr. Xiaoning Jiang, an associate professor of mechanical engineering at NC State. This work was supported by NC TraCS, NIH’s Clinical and Translational Science Awards at UNC-CH, grant number 1UL1TR001111.