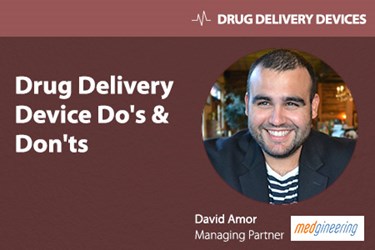 This article is the second in a two-part series focusing on 21 CFR Part 4 requirements for drug-device combination product manufacturers. This article examines what medical device companies with a QMS compliant to 21 CFR 820 need to comply with from the 21 CFR 210/211 (pharma/ drug) side. Part I reviewed the opposite scenario.

When 21 CFR 4, Regulation of Combination Products, first appeared, a collective sigh of relief emanated from medical device and pharmaceutical colleagues across the U.S. The root cause of this communal happiness was FDA’s long-awaited confirmation that a combination product manufacturer did not have to implement a quality management system (QMS) fully compliant with both drug and device cGMPs; rather, using a very prescriptive set of guidelines, FDA road-mapped the “add-on” subparts of the QSR that needed to be followed for pharma companies, and vice versa.

Part I of this series reviewed additional subparts of 21 CFR 820 that drug manufacturers have to follow. This article describes the opposite situation: if I am a medical device manufacturer venturing into the drug world, what elements of 21 CFR 210/211 do I need to follow? And, are those the only cGMPs that I need to be aware of?

Whereas cGMPs for medical devices are generally attributed to 21 CFR 820 (not exclusively, but close enough!), the pharmaceutical industry is governed by two sets of regulations, covered in 21 CFR 210 and 21 CFR 211. Furthermore, other industry guidance – which as you can imagine by now means guidance “you pretty much need to follow” – includes several non-statutory documents, such as those drafted by the International Conference on Harmonisation (ICH). Let’s first review some of these in more detail:

A word of advice: This is a very general regulation that covers definitions used through 21 CFR 211, as well as the status and applicability of drug cGMPs. 210 describes what kind of manufacturers need to comply with other drug-related regulations, including 21 CFR 211, where the bulk of QMS- related information resides.

One area of 210 that is of particular interest to combination product manufacturers is the description of cGMP applicability for Phase 1 Clinical Trials. If you are working on a combination product that has a drug and a device constituent, and you determine that the product’s primary mode of action (PMOA) is “drug,” your regulatory pathway likely will consist of a New Drug Application (NDA), Abbreviated NDA (ANDA), or one of the other special drug applications that FDA allows, including a 505(b)(2). That said, your company may be required to complete an investigational new drug (IND) application prior to submission to initiate clinical trials, starting with Phase 1.

Phase 1 combination product trials have been a subject of debate amongst industry veterans in the space. Drug clinical trials and device clinical trials are very different. In the device world, clinical trials are governed by 21 CFR 812, which describes the Investigational Device Exemption (IDE) and other FDA guidance, particularly on Early Feasibility Studies (EFS).  However, there is a clear consensus that products in an EFS/ IDE are exempt from cGMPs — except for design controls, per 21 CFR 820.30. In the drug world, although FDA indicates that cGMPs, per 21 CFR 211, are not required for Phase 1, the guidance document CGMP for Phase 1 Investigational Drugs (2008) does recommend several quality and manufacturing controls.

How does this work for combination products? As we learned in Part I, FDA’s least burdensome approach is to follow the regulatory path for the constituent part that represents the PMOA. So, if the PMOA is drug, then the overall product usually will required validation through Phase I, II, III, and IV clinical trials. 21 CFR 210 indicates that drugs in Phase I, with some caveats, are exempt from cGMPs in 21 CFR 211 — so, too, are combination products with a PMOA of ‘drug.’

In the drug world, the analogue to device cGMPs in 21 CFR 820 is mainly 21 CFR 211. This is where you’ll find expected QMS requirements like personnel competency and training, manufacturing controls, and purchasing and supplier evaluation. 21 CFR 211 is split into subparts A-K, vs A-O for 21 CFR 820. Although the language and prescriptiveness of 211 is similar to 820, the focus on the overall regulation is weighted more towards process development and control, versus other quality considerations.

In addition to the cGMPs described in 210/211, several ICH guidances exist that are critical during drug development and production, including ICH Q9: Quality Risk Management.

It’s made clear by 21 CFR 4 that redundant QMS’ aren’t a requirement for combination product manufacturers, which is fantastic news! For medical device companies, only the following subparts of the pharma cGMPs need to be added to your QMS scope:

211.84 Testing And Approval Or Rejection Of Components, Drug Product Containers, And Closures

Most of the 211 sections that require “tacking on” to 820 are related to drug processing and testing, beginning with 211.84. The first difference to note is the definition of component, which in the drug space is considered any ingredient intended for use in the manufacture of the drug product itself, even if it is consumed and/or does not appear in the final finished drug product.

Just like medical device components and materials need to be received and inspected for conformance per 820.80, so do drug products. Although there are some similarities, the requirements in 211.84 that must be satisfied before drug and drug components are accepted for use are significantly more prescriptive.

This regulation’s second most critical element is the inclusion of testing requirements for containers and closures. For combination products, the device often is considered part of the “container closure system,” usually as primary packaging. For example, many injectors hold the drug in a vial or tube, a container closure packaging component that, when assembled within the device, represents a “protection of the drug product contents.” When a combination product is considered a “single-entity” product, this example holds true. If a product is co-packaged as a separate drug and a separate device, 211.84 requirements are no longer applicable to the device constituent.

Drug considerations that are substantially different from device protocol include:

211.103 Calculation of yield is straightforward, explaining how yields of drug components or product are obtained at various stages of manufacturing throughout the process. In the pharma space, yield helps determine whether production nonconformances or deficiencies are contributing to a lower or higher volume of product versus what is anticipated. Due to the importance of yield calculations at various stages of production, they need to be documented in a batch record and verified independently by a second party.

Another regulation that has no correlation with an 820 requirement, 211.132 applies only to over-the-counter (OTC) drugs and how to demonstrate that they have not been tampered with prior to sale, thus preventing adulterated product. In a nutshell, this regulation requires OTC drug manufacturers to implement labels, tags, or other safety features that effectively communicate to prospective users that the drug has not been modified or tampered with, and remains safe and effective for use.

An important note for combination manufacturers: single-entity OTC products require tamper-evident features applied to the packaging scheme in total, not just the drug container. On the other hand, co-packaged product tamper evidence is only required for the drug constituent.

Expiration dating listed on product labeling helps ensure that drug products meet “the big four” drug standards — identity, strength, quality, and purity — over time and at point of use. As with medical devices, drug product stability depends on storage conditions that also are listed on the labels.

A key consideration for manufacturers is that combination products may not always reflect the shelf life of the drug only. If the drug stability data demonstrates that the drug degrades more quickly than the device constituent, it is appropriate that the expiration date reflects this information, and the drug expiration governs the overall shelf life. Conversely, if it is demonstrated that drug-device interactions may adversely impact the drug’s stability, the combination product may take on a new expiration date that is supported by testing.

211.165 Testing And Release For Distribution

Testing products before releasing for distribution is a “Quality 101” requirement common to both the medical device and pharma industries. So why does FDA’s 21 CFR 4 rule require a combo product QMS to include both 820.80 and 211.165? It mainly has to do with the specific and prescriptive requirements for final acceptance of drug products versus devices, including, once again, the “big four,” as well as other specific laboratory testing.

Let’s examine some of these differentiated requirements:

Stability testing described in 211.167 helps determine the expiration date for the overall product in 211.137. As with the medical device industry, drug products are put through challenging conditioning and storage conditions to validate that their identity, purity, strength, and quality don’t change substantially enough over time to impact safety or efficacy.

One of the biggest questions surrounding combination products is whether stability testing must be performed on the final combination of the drug and device constituent itself, versus testing the two separately. Although some companies choose to test separately in anticipation of clinical trials — where some cGMP exclusion applies — 211.167 indicates that “testing of the drug product in the same container-closure system as that in which the drug product is marketed” is required (i.e., single-entity combos should be stability tested in the combined configuration). Furthermore, for drug products that require reconstitution, stability testing requires the individual drug constituents to be tested, as well as the reconstituted solution.

211.167 describes testing requirements specific to a subset of drug products:

Reserve samples are used in the pharma industry to ensure that traceable material is available in the case of product complaints, confirmation of stability parameters, and root cause investigation of post-market issues or adverse events.  Reserve samples also are tested periodically to validate initial assumptions made during a drug-development cycle. For combination products, reserve samples should include the drug product itself, as well as the product in final packaging configuration, to more closely mimic real-life conditions.

Key components of this subpart include:

Combination product manufacturers implementing cGMPs, per 21 CFR 4, should consider the streamlined approach consistent with FDA’s recommendations. As a device manufacturer implementing drug cGMPs for the first time, always keep in mind the more prescriptive and explicit drug testing guidelines established in part 211.  Although several of the 211 regulations required by 21 CFR 4 are only applicable to a sub-set of drugs and drug-device combos, they provide a platform for “rounding out” your QMS to support combination product development and manufacturing.

David Amor, MSBE, CQA is a medtech/ biotech consultant and mobile health entrepreneur who founded Medgineering, a company focused on remote compliance, regulatory & quality systems consulting for larger companies and start-ups alike. A graduate of the prestigious Innovation Fellows program at the University of Minnesota’s Medical Device Center, Amor was named a Top 40 Under 40 Medical Device Innovator in 2012 and a 35 Under 35 Entrepreneur in 2015 by MN Biz Magazine. He co-founded and helped launch Remind Technologies, a Texas-based mobile health company developing a smartphone-based remote medication management system. He is also co-inventor on several issued utility patents and co-pioneered a disruptive e-consulting platform for the medtech and pharma industries called QuickConsult. Amor serves as an adjunct professor at St. Cloud State University (Maple Grove, MN) where he teaches courses on risk management and design control. The current focal points of his consulting practice are specializing in risk management, design controls, combination products and mHealth. He can be reached at david@medgineering.com or at 786-546-1806.