In the last two articles of our Thinking Lean series, we covered the continuous flow and pull systems, both of which connect the flow of materials and information, from point to point, in a value stream with minimal inventory and turnaround time.  In this article, we will talk about a very practical lean tool known as 5S, which supports the implementation of continuous flow and pull systems.

5S is a systematic process of visual workplace organization.  Major misconceptions about 5S include that it is a one-time cleanup, or that it focuses only on organizing hand tools. The 5S process is not simple elimination of toolboxes, tool organization, and clean-up. While the concepts are easy to understand, most companies have not implemented the process properly. Proper implementation of 5S has many benefits, including higher product quality, lower costs, reliable deliveries, and improved safety — benefits clearly relevant to any medical device manufacturer.

The intent of 5S is to have only what you need available in the workplace, and to implement a designated place for everything, a standard way of doing things, and the discipline to maintain it. Originating in Japan, the 5S’ are: seiri, seiton , seiso, seiketsu, and shitsuke. Translated to English, they are:

For the operator, the 5S system creates a superior working environment. It gives the operator an opportunity to provide creative input regarding how the workplace should be organized and laid out, as well as how standard work should be done. Operators will be able to find things easily, every time. The workplace will be cleaner and safer. Jobs will be simpler and more satisfying, with many obstacles and frustrations removed.

The first “S” (Sort) requires that we distinguish between what is needed and what is not needed. Then, it requires us to discard or relocate what is not needed for regular operations. This step is known as “red-tagging.” A team goes through all items (tools, equipment, material, etc.) and asks the question, “Do I need this to do my job on a regular basis?” Items that are used infrequently, or not at all, should be red-tagged. After determining what is actually needed, update all documentation to reflect the needed parts.

The second “S” (Set in order) requires that we organize and label items so that anyone can easily find, use, and return them to the correct place quickly. Visual controls should be used where practicable in this activity; a visual control is any communication device used in the work environment that tells us, at a glance, how work should be done. Elements of setting in order include:

The third “S” (Shine) involves bringing the workspace back to proper order by the end of each day. It requires periodic (at least once daily) cleanup, responsible person(s) identified for cleanup, establishment of cleanup/restocking methods (tools, checklists etc), and periodic supervisor inspection.

The fourth “S” (Standardize) is the method by which we maintain the first three S’. Organization, orderliness, and cleanliness are maintained and made habitual by instituting the first three “S” duties into regular work routines. The methods need to be standardized and required company-wide.

The fifth “S” (Sustain) creates a “5S Culture.”  The intent is to turn 5S into a habit. This requires an executive 5S champion to ensure that 5S becomes part of the culture, periodic walk-through inspections/audits with posted results, and 5S performance measurement of workgroups. Implementation of this final “S” is where most companies fall back into their old ways of doing things. Often, 5S is thought of as an activity, rather than an element of company culture; companies implement 5S for several months, only to find themselves regressing back to their previous state. To make 5S work, it is critical that performance be measured and that top management is committed.

While it is true that implementing 5S will make the workplace look much better and, if properly implemented, will begin to change the attitudes of employees toward keeping the workplace organized, it is also true that 5S can improve the flow of material and information throughout the operation. Let's review a few examples — and the resultant benefits — of 5S applied to four types of operations:

Case Example: 5S For Assembly At A Medical Device Manufacturer

Let us consider a medical diagnostic equipment manufacturer.  Envision an assembly operation with many components, and many tools needed to assemble the components. The organization began as a small “garage shop” operation, building very few units in the first year; however, after the device was approved for sale, demand began to grow.

A team of individuals was tasked with setting up standard workstations to enable the process to meet the demand on a consistent basis.  Over a two-day period, a team consisting of assemblers, manufacturing engineers, and two individuals from outside departments worked together on the project.  It followed the following steps:

2. The team worked on the first “S,” beginning with criteria for red-tagging. Next, they went to the assembly area and spent two hours red-tagging nonessential items, and then placed those items in a red-tag holding area.

3. The team worked on the set-in-order step. They began by listing all of the tools and materials needed at each workstation. There was some disagreement among the participants about which tools should be used, and the team worked toward consensus in developing a standard. 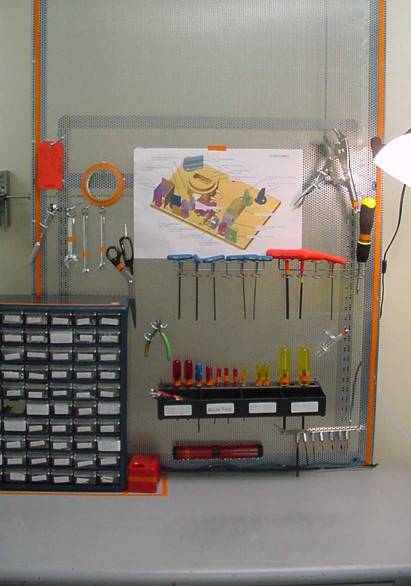 4. The team placed all of the tools and point-of-use-materials — consisting mostly of standard fasteners used in the assembly process — in the decided-upon locations, and then had the operators test the layout.

5. After some adjustments, the team utilized labeling and color-coding to facilitate ease of returning everything to order each day.

6. The team developed a daily “shine” checklist, to be followed at the beginning and the end of each shift. The checklist included restoring to order all tools, ensuring that no material is left on any of the work surfaces, and wiping down work surfaces.

Implementation Is Pointless Without Standardization

The case example described above was a jump-start to 5S for the work area. Much work was still necessary to instill the discipline needed to sustain the 5S system there. The team decided that regular weekly audits would be conducted in the area, initially performed by a cross-functional group of 5S champions that had been previously identified and trained. These audits would decline in frequency to monthly within two to three months. Slowly and methodically, 5S would be spread to other areas of the organization, and the system to sustain it would grow.

Much more than just cleaning up and organizing, 5S remains a very popular but misunderstood lean concept. It is foundational to enabling flow and pull systems, as well as instilling the discipline to work toward just-in-time and built-in-quality, two key pillars of lean.