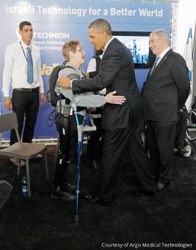 In what is being called a “landmark policy decision,” the U.S. Department of Veterans Affairs (VA) has agreed to issue the ReWalk personal exoskeleton systems to veterans who’ve suffered spinal cord injuries and lost the use of their lower limbs. Though the exoskeletons will only be available to candidates who meet the system’s physical criteria, the policy is expected to shape standard of care and nationwide insurance coverage decisions for paralyzed patients.

The ReWalk Personal System integrates customized wearable brace support with a computer-based control system that responds to subtle changes in upper body movement and balance.  Because patients’ movements are self-initiated, users are provided with an experience that more closely mimics natural human gait. ReWalk Robotics — originally known as Argo Medical Technologies — was founded in 2001 and recently introduced the sixth generation of its personal exoskeleton system, the only system of its kind to be approved by the FDA for home and community use.

“What makes this so exciting is the understanding that, in addition to the psychological benefits realized by ReWalking, consumers are able to improve upon the clinical benefits,” said Larry Jasinski, CEO of ReWalk Robotics, in a 2014 press release. “With FDA clearance, users will continue to experience these benefits on a daily basis from home.”

While the system has been available worldwide for years, its $77,000 price tag was prohibitive for many U.S. veterans who could potentially benefit from the device. The Associated Press (AP) reported that veterans have been petitioning the VA to facilitate access to ReWalk devices and training.

Ann Spungen, VA medical researcher who led a study of the device, told AP that the policy was an “historic move” that signaled a “paradigm shift in the approach to rehabilitation for persons with paralysis.”

In a company press release, Jasinski commented on the importance of the VA’s independent clinical study, which — he says — “conclusively demonstrated” the system’s clinical benefits.

“Based on their data, the VA’s national policy now defines the use of an exoskeleton as the standard of care for qualifying veterans with spinal cord injury,” said Jasinski. “We are hopeful the VA policy will pave the way for additional positive national coverage decisions.”

AP estimates that there are over 42,000 U.S. veterans who have suffered from spinal cord injuries, but at this time, only a very small portion — 45 in all — meet the height and weight requirement of the system.

Jasinski told AP that the VA’s policy included a “sound process” to train veterans in the appropriate use of the system, which he expects to “substantially improve the health and quality of life of many veterans in the years ahead.”