What Will the USMCA Mean for MedTech? 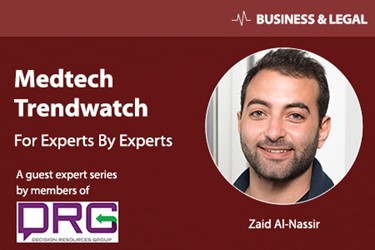 [1/27/2019 Editor Note: This article has been updated to reflect recent U.S. and Canadian efforts to ratify the agreement.]

On Nov. 30, 2018, U.S. President Donald Trump, then- Mexican President Enrique Peña Nieto, and Canadian Prime Minister Justin Trudeau signed The United States–Mexico–Canada Agreement (USMCA), concluding over a year of negotiations surrounding the much-publicized successor to the North American Free Trade Agreement (NAFTA). Though signed and agreed to in principle, the new agreement has been ratified only by the U.S. and Mexico, but not by Canadian legislature, and thus has not yet come into force.

Despite the contentious nature of the negotiations, as well as criticism levelled at some of the new provisions, analysts appear to agree that the USMCA represents an upgrade — albeit a modest one — over NAFTA for all parties included. One facet of the new agreement surrounding medical devices marks clear progress for North American medtech markets, given that NAFTA did not include a section dealing exclusively with medical devices.

USMCA Medtech Provisions: What is New?

Titled Annex 12-E,  this addition has been hailed by AdvaMed as a significant improvement in the rules governing medical devices across North America. Included in this annex are a handful of provisions, summarized below, that the signatories must abide by once the agreement is ratified and in force:

According to AdvaMed, these provisions are expected to enhance transparency and fairness throughout North America, and will afford patients in the region with broader access to novel medical technology under stable, clearly defined, and harmonized regulatory systems.

Moreover, these provisions — specifically those eliminating duplicative regulatory requirements — will likely reduce costs for manufacturers bringing devices to market in North America, which may allow companies to bolster investment into R&D and the development of innovative solutions. More particularly, the new trade agreement diminishes so-called “non-tariff barriers,” which will enhance the ability of US companies to offer devices in Canada and Mexico, and vice-versa.

In April 2019, the US International Trade Commission (ITC) released a report highlighting the USMCA’s expected impact on the US economy and certain industries — a mandatory procedural step that paves the way for USMCA debates to begin in Congress. With regard to the medtech space, the ITC anticipates a largely positive impact, spurred by the provisions seeking to inhibit duplicative regulatory requirements and unnecessary trade barriers, which “exert a statistically significant, negative impact on medical device trade,” according to the report.

Notably, the ITC estimates that the USMCA’s IPR protections will reduce the cost of medical device trade in the Canada and Mexico by 8.21 percent and 11.22 percent, respectively, which is subsequently expected to bolster medical device imports from the US in those countries.

The ITC also suggests that medical device trade in the region could be further improved by encouraging additional regulatory harmonization between the three parties in terms of import restrictions; in particular, the report highlights the fact that the FDA’s quality systems regulations are not recognized in Canada, which — in addition to forcing manufacturers to undergo separate regulatory pathways — constrains the import of high-end medical devices from the U.S. and delays their availability to Canadian patients.

That all said, the USMCA’s impact on medtech markets is expected to be somewhat modest, primarily because the three parties are already well-aligned in terms of medtech regulations and standards.

The agreement, as previously noted, requires ratification by each country’s legislature before coming into effect; however, domestic political developments in the U.S. and Canada have hindered its approval.

In the U.S., it appeared in 2019 that the persistence of the Trump Administration’s steel and aluminum tariffs on Canada and Mexico, originally imposed in 2018, would render ratification even more challenging, those tariffs (and the associated retaliatory tariffs) were lifted on May 17, 2019, effectively satisfying the conditions set out by Republican senators to begin debating the USMCA and removing a significant obstacle to ratification in both Canada and Mexico.

Another obstacle was set by U.S. Congressional Democrats, who have held a majority in the House of Representatives since January 2019. The party previously indicated it was unwilling to put the USMCA to a vote before Mexico passed labor reform laws that were tied to USMCA provisions; on April 29, 2019, Mexico’s senate did just that, and a few days later, Mexican President Andres Manuel Lopez Obrador prompted US lawmakers to ratify the new agreement.

Setting an example and upping pressure on U.S. lawmakers on June 19, 2019, Mexico’s senate successfully voted to pass the USMCA, becoming the first signatory to formally ratify the deal.

Following months of negotiations between Democrats and the White House — through which Democrats introduced purportedly more robust labor, pharmaceutical, environmental, and enforcement stipulations — the U.S. House formally passed the agreement on Dec. 19, 2019, and the Senate approved it nearly a month later, on Jan. 22, 2020. On January 29, 2020, President Trump signed the deal into law, making the US the second signatory to ratify the USMCA.

Canadian PM Trudeau, meanwhile, introduced an implementation bill in that nation’s House of Commons in May 2019, initiating the process required to ratify the deal. However, Canadian officials have indicated that ratification will advance in lockstep with Congress and, given that the Canadian parliament was suspended in September 2019 in preparation for the federal election, all USMCA bills must be brought to the House again when the new parliament is sworn in -- a process initiated by the Liberals on Jan. 28, 2020.

Considering the substantial progress made by the previous parliament, there is little doubt regarding the deal’s ultimate viability under the incoming parliament. PM Trudeau indicated that his government plans to ratify the agreement as soon as possible, but it is expected that opposition parties may challenge certain aspects of the deal, which (given the Liberals’ current minority government status) may delay ratification in Canada, perhaps for a few months.

As it stands, it is expected that the USMCA will be ratified in Canada within the first quarter of 2020 and will come into force across North America within 90 days after the final signatory’s ratification. Once this takes place, the agreement’s ratification will be received warmly by medical device manufacturers and associations across North America, and will likely improve patient access to innovative medical devices in all three countries.

Zaid Al-Nassir is a senior product support analyst at Decision Resources Group. He holds a B.A. focused in Political Science, History, Writing & Rhetoric from the University of Toronto. Zaid can be contacted at zalnassir@teamdrg.com