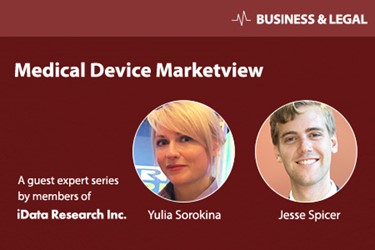 Shoulder implant design has been gradually evolving towards shorter implant stems since total shoulder arthroplasty results were first reported over 40 years ago. Reflecting a growing trend of minimally invasive surgeries, stemless arthroplasty is driven by the desire to facilitate smoother revision procedures, and to prevent stem-related complications.

At first glance, the stemless implant is superficially similar to a resurfacing. The main differences are the thicker metaphyseal anchorage, as well as the larger head component that replaces part of the humeral head, rather than just the surface. Therefore, in contrast to resurfacing, stemless arthroplasty allows for glenoid replacement. Stemless shoulder implants do, in fact, have a short stem, although it does not enter the diaphysis of the bone like a stemmed device. Instead, it remains completely in the metaphysis of the humeral neck.

The first stemless arthroplasty product, the T.E.S.S. stemless system, was introduced by Zimmer Biomet in 2004. Since then, various manufacturers have brought their stemless design options into the market. Although stemless arthroplasty is not an entirely new development, with over a decade’s presence in the market, its popularity is much more prominent in Europe than in the United States. In 2015, SIMPLICITI by Wright Medical received approval by the Food and Drug Administration (FDA) and became the first stemless design available in the United States. In Europe, however, the implant’s clinical life began in 2010 in France. Today, there are still only a few options for stemless shoulder implants currently available in the U.S., leaving a large opportunity for manufacturers to take advantage of.

Besides the T.E.S.S. system, Zimmer Biomet’s product portfolio includes two other bone-sparing design options, the Comprehensive Nano, which is the second generation of the T.E.S.S. system, and the Sidus, which entered the European market in 2012.  The Comprehensive Nano has a convertible design, which can be utilized in anatomic or reverse arthroplasty.  In January 2018, Zimmer Biomet announced that its Sidus Stem-Free Shoulder system had received a FDA clearance.

Another early adaptor of stemless technology was Arthrex, which introduced the Eclipse stemless system in 2005. Following Arthrex, in 2008, Mathys brought its stemless arthroplasty system, Affinis Short, into the European market. Two other companies, FX Solutions and Lima Corporate, launched their stemless products — EASYTECH and Lima Shoulder Modular Replacement (SMR), respectively — in 2015. Addressing the rising stemless implants market trend, these companies have continued investing in the bone-sparing arthroplasty market. Two recent product introductions in Europe include DePuy Synthes’ GLOBAL ICON, as well as Arthrosurface’s OVO Primary Stemless Shoulder system with inlay glenoid. While the product from Arthrosurface was introduced in the U.S. in 2009, the company only announced its plan in 2017 to make the implant commercially available in Europe.

The decision to choose stemless options has become easier as more clinical studies prove comparability with their stemmed counterparts. The first stemless shoulder arthroplasty clinical paper was published in 2010 by Huguet et al. The 3-year follow-up study covered 63 patients given the Zimmer Biomet T.E.S.S. implant, and showed an 11.1 percent, 3-year revision rate of the implant. Since then, there have been several short and midterm studies conducted on stemless implants, which showed the comparability of stemless and stemmed arthroplasty outcomes in the up-to-5-year follow ups.

In September 2017, the first long-term study on the effectiveness of stemless implants became available, indicating positive results. The study demonstrated 9-year clinical outcome comparability of stemless shoulder implants to that of third and fourth-generation standard shoulder arthroplasty, as well as significant improvement in patient satisfaction.

While overall clinical evidence supports the use of bone-sparing implants, there also has been research outlining some less favorable outcomes of stemless arthroplasty. For example, a 2016 study, conducted on 241 patients, demonstrated higher incidences of deep-joint infection after stemless arthroplasty, when compared to conventional stemmed arthroplasty.

Advantages And Disadvantages Of Stemless Implants

As seen in recent market trends, the multiple advantages of bone-sparing implants outweigh their drawbacks, and stemless shoulder implants are gaining increased acceptance in Europe. With more clinical data accumulated over time and long-term clinical studies outlining positive outcomes, the level of surgeon skepticism towards stemless implants has been declining across Europe. However, acceptance of stemless implants is following different patterns across different European countries. 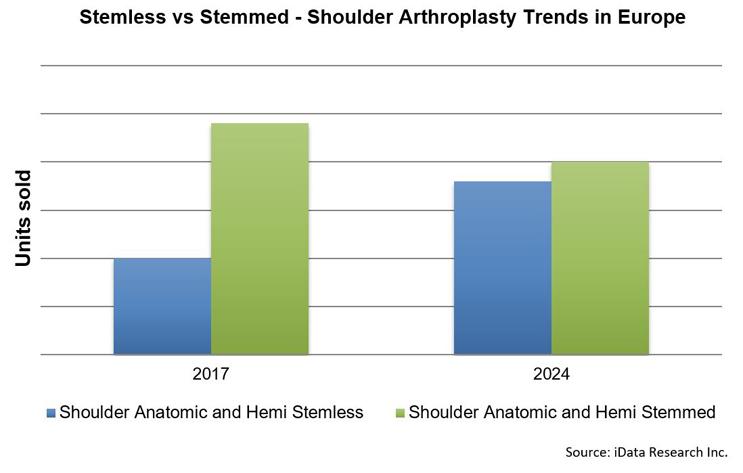 Yulia Sorokina is a Research Analyst at iData Research. She was the lead researcher on the latest research covering the Small Joints Orthopedic Device Market in Europe and has a history of other research projects with iData in Orthopedics.

Jesse Spicer is an Analyst Manager at iData Research. He has been involved in numerous orthopedic market research projects over many years, and now leads a team involved in that market and many others.