Window Through The Skin: The Development Of A Pocket-Sized Imaging Device 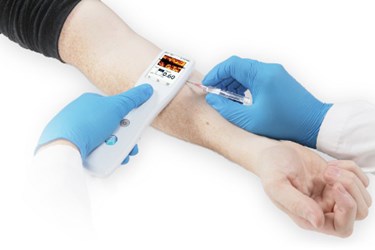 How an entirely new approach to handheld ultrasound imaging made its way from the university to the clinic.

I have a confession to make: I am more than a little afraid of needles.

When it comes to getting blood drawn, an IV inserted, or pretty much any other procedure that involves shoving one of those pointy little devils through my skin and into my blood vessels, I am an abject coward. Case in point: I've been putting off a blood test related to my 2013 annual physical for the last 8 months, mostly because I’d rather not be stabbed repeatedly by the phlebotomist as he or she attempts to access a suitable vein. More often than not it takes several tries, and sometimes involves multiple sites and/or appendages.

As it turns out, my experience (if not my irrational fear) is surprisingly common. Here are some interesting statistics related to vascular access procedures, of which more than 1.4 billion occur in the United States each year:

My intent in sharing this information is not to criticize the fine medical professionals who perform these procedures. On the contrary, they should be commended for succeeding as often as they do, given that they’re essentially flying blind — the skin is (at best) translucent and the underlying tissue is opaque. No, my purpose is to point out the need for better tools to help them do their job, which will ultimately result in reduced discomfort and anxiety in patients, fewer complications, and less cost burden on the healthcare system.

Based on the information above, you can imagine my enthusiasm when Alessandro Gubbini, managing director of OEM ultrasound at Analogic (Peabody, MA), and colleagues introduced me to the new Sonic Window handheld ultrasound device during a meeting at Pennsylvania State University earlier this year. Following a brief presentation, they handed me the TV-remote-sized device, squirted some ultrasound gel on my forearm, and let me try it out on myself. Within moments of moving the Sonic Window across my skin, I was able to obtain a real-time view of a vein that lay centimeters below the device, presenting a much clearer target for a (mercifully) hypothetical IV catheter. I thought to myself: There may be hope for my needle aversion yet.

A Novel Approach To Vascular Access Guidance
The use of ultrasound imaging to guide vascular access procedures is not new — the practice has been around for more than 20 years. However, its popularity has soared over the last decade, as both the size and cost of the technology have come down. Numerous handheld ultrasound devices have hit the market in recent years, and near infrared (NIR) technology has entered the fray, emerging as a viable option for certain vascular imaging applications.

With more than a dozen portable vascular imaging devices already in the mix, it’s reasonable to wonder why any company would choose to enter this competitive space.

The young company landed on peripheral IV (PIV) access, for several reasons. First, a large number of PIV insertions occur in the U.S. each year — somewhere on the order of 500 million — and roughly one in three of these are unsuccessful on the first attempt. In addition, the PIV guidance space has historically been dominated by large, expensive ultrasound machines, and demand for portable, cost-effective devices for point-of-care use was on the rise. Sonic Window fit the bill, measuring only 8.2” x 2.2” x 1.0” and weighing less than 10 oz.

As I mentioned previously, there are several handheld ultrasound devices now available for PIV, but these, too, have issues that have limited their adoption in the healthcare system. For example, most portable ultrasound devices come in two parts — a transducer probe and a separate unit incorporating a display, controls, and image processing components — which are often connected to each other by a wire. Sonic Window is a fully integrated, one-piece device that is completely untethered. It can easily be operated with one hand, leaving your other hand free to insert the IV or perform related tasks.

An even bigger issue with most handheld ultrasound devices is that they produce traditional ultrasound images, which are abstract and require a significant amount of training to interpret properly. Sonic Window, on the other hand, displays a real-time coronal tissue slice on the device's small screen, essentially making it appear as though you are looking through a window (hence the name) at the tissue and vasculature directly below. This makes it much easier to use and significantly reduces the learning curve for operators.

Newly available NIR imaging devices do approach the size and integrated format of Sonic Window. However, they can only penetrate up to 10 mm below the skin, while Sonic Window can visualize vessels down to several centimeters deep. Imaging depth is controlled by a thumb-operated slider mechanism on the top of the device.

“When you’re trying to look at vessels in the arm to determine where to insert a needle or cannula, you want to see what you’ve been taught in anatomy books, not what you see in a traditional ultrasound image,” Lars Shaw, Analogic’s VP of marketing, told me. “Anybody can pick up the Sonic Window and with minimal training be able to easily identify and measure vessels from just below the skin to 3 cm deep.”

Partnering To Overcome Scale-Up Hurdles
Once the company had landed on a market and demonstrated that Sonic Window worked, PocketSonics' next major hurdle was transitioning the technology from the bench to a practical, manufactured product. That’s where Analogic entered the picture.

Analogic is an image guidance company, with more than 40 years of experience in developing computed tomography (CT), magnetic resonance imaging (MRI), digital mammography, and ultrasound systems for a range of medical applications. The company’s Sound Technology unit (State College, PA) develops transducer technology for OEM ultrasound applications, and that’s where PocketSonics’ Hossack turned for assistance in fabricating the Sonic Window. Not only did Analogic agree to help, it liked the PocketSonics technology so much it decided to invest in the startup company.

Analogic and PocketSonics faced several significant manufacturing challenges with the Sonic Window, and both were related to integrating the transducer array and front-end integrated circuits (ICs) on either side of the same printed circuit board (PCB) — something that had never been done before on such a small scale.

Traditional transducers are complex devices, incorporating a piezoelectric element (typically made of lead zirconium titanate, or PZT), a backing block, a matching layer, and absorbing materials. One of the Analogic-PocketSonics team’s challenges was figuring out how to fabricate a transducer array with 6000 elements. This required them to develop a new process to dice (cut) the tiny elements in the transducer material to the precise height and kerf (space between elements) necessary for generating accurate images. And, the process needed to be scalable and repeatable.

Another challenge was determining how to affix the transducer array and the ICs to the same PCB substrate. Standard, off-the-shelf contact materials were breaking down over time under the heat generated during manufacturing. The Sonic Window team needed to develop a new adhesive formula that could withstand heat and maintain the bond between the two layers for the lifetime of the device.

They also needed to formulate a new backing block material, which absorbs ultrasound energy emanating from the back of the transducer material, to obtain the exact ultrasound characteristics they needed to improve image quality.

The fact that Analogic has diverse engineering resources proved to be pivotal in solving these issues. The company pulled in engineers from multiple divisions — in addition to medical ultrasound — to help. For example, engineers from the company’s CT equipment group provided key input that led to the discovery of an adhesive formula that could survive heating.

In the end, Analogic and PocketSonics decided to make their relationship more than a partnership. Deciding that this new technology would make a great edition to its product portfolio, Analogic acquired PocketSonics and the Sonic Window in September 2013.

Manufacturing challenges behind it, Sonic Window received FDA 510(k) clearance in April for use in PIV procedures, and began shipping in the U.S. this summer. (The device is also cleared for venipuncture.)

Analogic is already looking ahead to future development of its new technology. In a press release announcing the FDA approval, president and CEO Jim Green said: “We also expect that the Sonic Window platform, which is based on our patented DSIQ technology and incorporates an advanced 2D ultrasound imaging array, will form the foundation of a family of products that will address procedure guidance and diagnostic needs in both acute care and physician offices.”

What will the next steps be for Sonic Window technology? The company has publicly stated that it is exploring the possibility of wirelessly connecting the platform to a tablet or other display. This would allow users to export images to a larger screen and view them in different formats like color, Doppler, and possibly even 3D. But beyond that, the company isn’t revealing its specific plans, including expansion of indications.

However, the technology could conceivably find use in any number of medical applications that involve traditional ultrasound equipment. For example, in emergency medicine, it could serve a variety of roles, including identification of blood in the chest cavity. It could be used in diagnostic contexts, like scanning for abdominal aortic aneurysms (AAAs). Other guidance applications could be in play, like central line insertion, needle biopsies, and cyst aspiration. A white paper [PDF] on the Sonic Window website suggests the device could be used to detect deep vein thrombosis or to cannulate the radial artery for blood sampling. It isn’t hard to imagine other uses in obstetrics, sports medicine, nursing education, veterinary medicine, and many other disciplines.

“Clinical evaluation of the new Sonic Window reveals that the combination of advanced ultrasound imaging technology with portability make our small, pocket-sized device an efficient tool to use in clinical settings for the successful establishment of PIV,” Farley Peechatka, senior VP and GM of Analogic’s ultrasound business, told Med Device Online. “We believe our breakthrough ultracompact system will expand into many clinical applications and successfully address procedure guidance and diagnostic needs in acute care settings and physician offices.”

Needle-wimps like me can only hope that the list of indications for Sonic Window continues to expand — before my next visit to a healthcare facility.