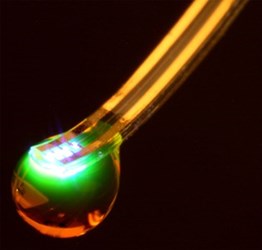 Scientists funded by the National Institute of Health (NIH) have developed an optofluidic implant that, when inserted into the brain, can wirelessly deliver drugs and control neurons.  The minimally-invasive device offers a “revolutionary tool” to mapping the brain circuitry that controls a number of different neurological disorders, according to its makers.

A major obstacle for neuro-scientists is the size of tools available to them. Bulky metal tubes or fiber-optic wires can damage surrounding brain tissue and inhibit researchers’ understanding of the fundamental neural workings of pain and disorders like depression, stress, and addiction. By miniaturizing their methods, scientists could get a clearer, unimpeded look at neural functions.

The project — a team effort between Washington University School of Medicine and the University of Illinois, Urbana Champaign — created a wireless implant that is 80 µm thick and 500 µm wide, one-tenth the size of a human hair. The device is remote controlled and made of soft materials to minimize tissue displacement and damage, said scientists in a NIH press release.

“We used powerful nano-manufacturing strategies to fabricate an implant that lets us penetrate deep inside the brain with minimal damage. Ultra-miniaturized devices like this have a tremendous potential for science and medicine,” said John Rogers, a senior author of the study, published in Cell.

Because the device is designed to be wireless and minimally invasive, scientists had the opportunity to observe brain circuitry in “freely moving animals.”  By experimenting with the portion of the brain that controls motivation and addiction, scientist were able to make mice walk in a circle in response to morphine injections.  With combined light and drug therapy, scientists could control — using an antenna placed about three feet away — which side of the cage the mice preferred.

Perhaps the most valuable part of the research was the scientists’ ability to inject viruses that labeled neurons with genetic dyes, providing precise maps of brain circuitry that had never before been observed.

“It unplugs a world of possibilities for scientists to learn how brain circuits work in a more natural setting,” said Michael Bruchas, associate professor of neurobiology and anesthesiology at Washington University School of Medicine.

According to James Gnadt, program director at National Institute of Neurological Disorders and Stroke, the project falls perfectly in line with the goals of the Brain Research Through Advancing Innovative Neurotechnologies (BRAIN) initiative. BRAIN awarded an initial $46 million last year as the first wave of a major U.S. investment toward understanding brain functions and bridging the gap between new technological innovation and brain exploration.

Francis Collins, NIH director, commented that the human brain is one of the “most complicated biological structures in the known universe,” and the awards are part of 12-year strategy to unlock the brain’s secrets and potentially treat its disorders.

Scientists that developed the wireless implant have provided a detailed schematic in their published study, and encourage other research labs to take full advantage of the tool they’ve created.

“A tool is only good if it’s used,” said Bruchas.