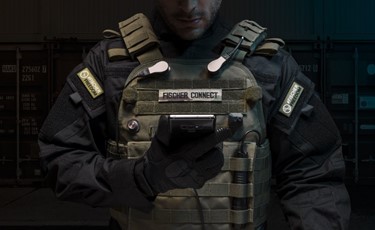 SOFIC, Tampa, FL - Fischer Connectors continues to protect and defend special operations personnel with its debut of a new wired tactical vest at SOFIC 2019.  This fully-functional tactical vest on display in booth #2232 features Fischer Freedom™ Series connectors sewn into the garment and connected to a distributed data and power bus that handles soldiers’ connectivity needs. The unique connectivity solution cuts weight from the vest while improving functionality.

Integrating a distributed data and power bus into the tactical vest eliminates the need for the external wires or break-out cables that currently weigh soldiers down.

Receptacles sewn into the vest and attached to the bus connect to devices and deliver power and signal, and a single battery pack powers all the devices. Communications gear, sensors, flashlights, cameras, viewfinders, GPS devices, and other essentials can be attached with matching plugs built directly into the device without the use of cables. 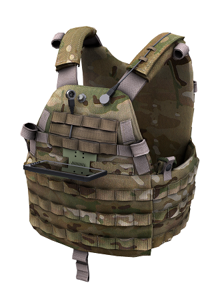 This approach to tactical connectivity is part of an overall trend to integrate more wearable technology into military gear to help reduce weight and simplify use.

Wim Vanheertum, Director of Product Management for Fischer Connectors says new connector technology is a critical element of the rapidly expanding market for wired tactical vests. “Rugged, low-profile connector receptacles sewn directly into the fabric and matching plugs built directly into devices can significantly reduce, or even eliminate, the use of cables. The award-winning Fischer Freedom™ Series connector used here has concentric rings on the receptacle that allow for 360° mating freedom, and a plug with a sealed membrane that protects the contact block with an IP68 rating.”

According to Vanheertum, sensors can be built into plugs, or plugs can be engineered directly into devices to eliminate cables entirely. The low-profile plug can also be cabled for communications gear and other devices such as cameras and video screens.

Several companies have already started building vests, devices, and sensors based on these concepts, and are testing them in multiple countries.

Caption: Networked wearables that share a common data and power bus reduce the number of external cables, as well as the associated risks of entanglement or damage, help reduce total system weight, and support an expanded range of capabilities in military and defense applications, including the tactical vests worn by dismounted soldiers, police, and other first responders.

A SNEAK Preview of the smaller four-pin plastic version of the Fischer Freedom™ Series is available at SOFIC.. Please stop by to take a look at this unique connector series.